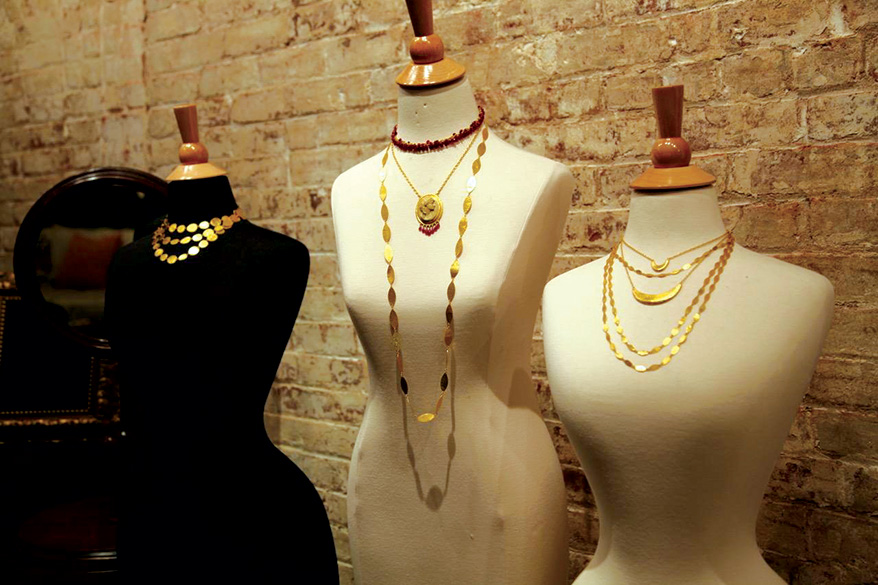 Is there any display theory when it comes to long necklaces?

Showing off the full glory of a long necklace allows you to be daring in a way you can’t with other jewelry, but it’s also limiting because of the sheer size of the piece and the room such displays require. Pinterest is a great place to start the search for inspiration. Display expert Larry Johnson, author of the Complete Guide To Effective Jewelry Display, says, “In a wall case, it is best if the case is placed where the customer can get close to the glass to see the detail (i.e. not behind a showcase blocking walkup space).” Johnson also recommends adding signage to romance the piece.

With inside cases, it is important to realize it is not necessary to show the entire length of chain, Johnson says. “It’s acceptable to lay them flat with the pendant and about four inches of chain showing with the remainder coiled up,” he says, adding you should include a sign with a line like “Fashionable 30-inch necklace” to let customers know the actual length of the chain.

Laying bulky items, such as long necklaces and 6-inch diameter hoop earrings, on the floor of the case is about the only way to show them, Johnson says.

We still believe some version of the manners guru Emily Post’s formulation — “I’m afraid that won’t be possible” — remains the gold standard. Excuses merely invite negotiation. Whether you do it comically (“I can’t, my wife would kill me”), or via responsibility-shifting non-explanation (“I can’t, because I’m unable to”), the best way to say no is to say no. Keep in mind too that in some cultures and in some families, people grow up believing they can and should ask for anything — a favor, a pay raise, a price cut — fully realizing the answer may be no. So say no, and see what happens.

I once had a boss who said sometimes you just need to be a jerk, but every time I blow up at someone, I regret it later.

We’d quietly demur, probably behind your old boss’s back in whispered conversation with other employees. No one likes angry people. Moreover, irate bosses don’t make rational decisions. The traditional anger-management advice was that when you felt the red mist rising, go vent or pound a pillow in your office. But more recent studies show such focused acts usually only fuel more ire. A better fix is to switch to something sufficiently complex so that anger isn’t an option. Force yourself to start a crossword or some other game. Playing Tetris while ranting internally is surprisingly difficult to do. Let the fury dissipate and then go make a proper managerial decision.

How can I make sure that a job candidate will be trustworthy?

Denis Collins, a business professor who specializes in business ethics at Edgewood College in Madison, WI, recommends the following:

Ethics-based interview questions. “Ask the candidate how he or she responded at a previous job to someone stealing, engaging in sexual harassment, or cutting corners at the cost of high ethical standards. Ask them if a superior ever requested that they do something unethical and, if so, how they reacted. Even those who are dishonest with their answers can reveal how they feel about ethics in general.”

Review behavioral information. Such information can be gathered through resumes, reference and background checks and some basic integrity tests that quiz candidates through “what would you do” style situations. “Three standard integrity tests come from the Reid Report, the Stanton Survey and the Personnel Selection Inventory (PSI), which are easily found with a Google search if you don’t already have access to them,” Collins says.

Keep in mind that you don’t have an unfettered right to probe into applicants’ personal affairs. Workers have a right to privacy in many personal matters, a right they can enforce by suing you if you dig too deeply. (A handy list of the legal considerations can be found here: instr.us/12171)

When’s the best time to leave a voicemail message?

The truth is, no matter what kind of message you leave, some people — especially those younger ones — will just never listen to their voicemails (although if they were true millennials they’d have their phone set to Google Voice and receive text versions of the call). Try to avoid leaving messages on a Friday afternoon because surveys show this is when calls are least likely to be returned. Monday mornings can also be a bad idea as people have higher priorities. In terms of the hours, best times are 7 a.m. to 8 a.m. and 4:30 p.m. to 6:30 p.m. A few other pointers: be sure to give them a specific reason to call you back, don’t try to sell anything, keep it short, and if you’re calling their home phone, give your number twice. This way, if the person doesn’t write it down the first time, they get a second chance without having to repeat the message.

Pandora to Roll Out Lab-Grown Diamonds in North America