WITH LAS VEGAS JEWELRY Week two months in the past, I thought I had seen everything I needed to see for the season as far as new trends, hot items and designers to watch or discover. But August in New York kicked off with Spectrum Awards Editors’ Day and then, from Aug. 10-14, four shows ran almost concurrently: Melee the Show, NY Now, The JA Show and Metal & Smith. There were also press deskside appointments of saleable and noteworthy designers. A summer head cold, pad full of notes and iPhone full of photos later, I realized there was a lot more to report and bring to the attention of retailers who couldn’t make this trip into New York City.

Let’s break it down.

The colorful pieces shown above are by (left to right) Soulbound, Sofia Zakia and Rebecca Overmann.

These rings are by (left to right) Karen Karch, K8 Jewelry and Elizabeth Street.

This was the leading trend at these shows for a new wave of bridal rings rendered beautifully by both established independent and up-and-coming designers. The best in this category included Rebecca Overmann, Megan Thorne, Karen Karch and Sofia Zakia as well as rising stars Elizabeth Street, Soulbound (all at Melee the Show) and K8 Jewelry (at The JA Show).

Vibrant and unexpectedly refreshing stones for engagement rings such as green sapphires, moonstone, garnet, purple and red spinel, rubies, aquamarines, pink sapphires and a host of other gemstones we never thought would sell in this category created new excitement among retailers who shopped the show.

These old-meets-new designs are by (left to right) Talon, Sofia Zakia, Heavenly Vices and Erica Molinari.

The Past Meets the Present

This trend can be seen in independent designer collections with jewels that borrow from the past yet are imbued with both a current sensibility and built-in longevity. Contemporary designers are inspired by different periods and reimagine their influences with daring and the freedom to mix time frames and materials with abandon. A few of these creative designers also work with one-of-a-kind pieces that they transform into symbolic keepsakes for today’s woman. Designers mixing old and new or reflecting on pieces of the past and turning them into modern jewels include Samantha Jackson of Heavenly Vices (Metal & Smith), Erica Molinari (Melee the Show), Sofia Zakia (Melee the Show),  Talon (press preview) and Darsana (press preview).

Working On the Chain Gang

This is a theme that continues to evolve as designers create their own chains from cast and handmade links in different shapes, lengths and widths. There’s often an extra link that acts as an “add on” to lengthen or add one medallion or multiple charms and medallions to the chain. Whether they be necklace or bracelet chains, the links can also be worn alone. They are often textured with touches of different colors of diamonds as accents or combined with vivid colored gemstones to pump up the style quotient and add an extra dimension of elegance. Designers who have joined the chain gang include Polly Wales (NY Now), Tura Sen (Melee the Show), Michelle Fantaci (Melee the Show) and Mallary Marks (Melee the Show).

Show Me Your Heart

Designers have brought back this universal symbol of love in all materials. It is one of the most popular motifs I saw from Las Vegas and the August shows in New York City. Although the heart still evokes sentimental and spiritual meanings that range from romance to devotion to friendship to divine love, the modern interpretations are anything but frilly or fussy or sugary sweet. These new versions range from feminine yet bold to daring and edgy. Designs from Thereza Kaz (The JA Show), Roule & Co. (Melee the Show), Michelle Fantaci (Melee the Show) and Darsana (press preview) are sure to win the heart of today’s consumer.

This trend continues with all shapes and styles of earrings. Multiple piercings are still going strong in smaller studs and drops. Geometric linear styles are going strong, and those with spherical drops offer a feel of the planets and celestial themes so prevalent this season. For different styles check out Moritz Glik (Melee the Show), Hannah G (press preview), Soulbound (Melee the Show) and Julie Lamb (Metal & Smith).

This is where you will want to stay even when the chill of fall comes along. This is a look that seems to continue well into fall/winter and holiday as so many women love floral motifs. And when they are mixed with insects in gold or precious stones and metal, well, we even appreciate them then, especially when created by Lene Vibe (Melee the Show), whose pieces continue to grow more magical and who creates a whole little fantastical world around pearls.

Alex Monroe Jewellery (Melee the Show) also does an amazing job with the tiniest of insects and a range of small and delicate blooms that appear on necklaces, earrings and rings.

Shown above (left to right) are displays by Julie Lamb, Heavenly Vices and Alex Monroe.

These displays are by (left to right) Soulbound, Megan Thorne and Lene Vibe.

Take a page out of these designers’ cases. All of them used either vivid colors or the perfect props that allow you to understand their designs and make them pop. Check out how Soulbound creates the feeling of its collection within a 6-foot case with small objects (Melee the Show). Alex Monroe Jewellery creates a similar vibe with their displays props and pretty little accents (Melee the Show). Megan Thorne’s touches always echo back to her feeling for antique inspired creations such as in her vintage peacocks that act as ring trays. Lene Vibe (Melee the Show) also adds an extra touch with glass and brass cases that act as displays for her little garden party of jewels. Heavenly Vices (Metal & Smith) shows that you can display pieces beautifully when you only have a table to work as long as you have just the right hue in light violet displays that pop gold and silver, diamonds and enamel touches. And Julie Lamb (Metal & Smith) proves that you are in New York with her themed posters and touches that speak to the city she captures in her collection. 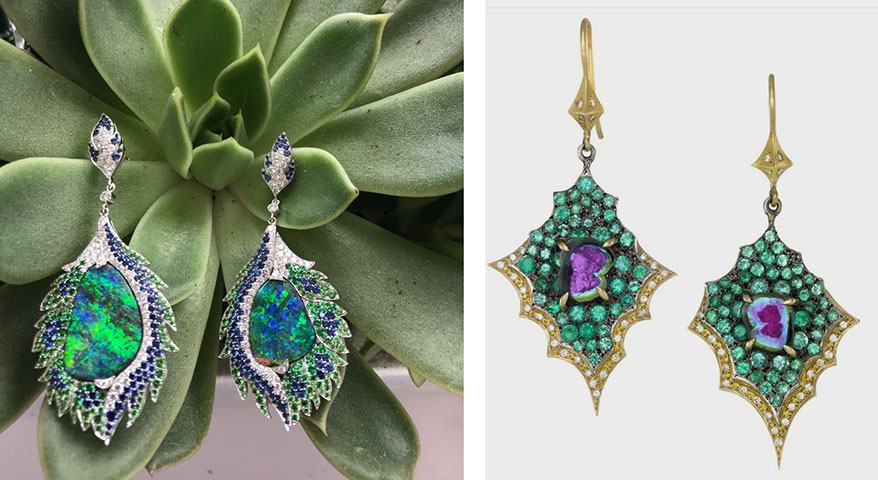 These plume-inspired pieces are by Annie Fensterstock.

Stand Out and Show Your Plumes

If these styles don’t bring out the peacock in you, I don’t know what will. Peacock feathers take shape in all different renditions, but two favorites were those that appeared in earrings by Annie Fensterstock at Melee the Show and at The Spectrum Awards Editor’s Day.

A Jewel of a Different Color (or Many Colors)

This trend can be seen in those with enameling in everything from antique-inspired looks to those with a pop ’60s feeling. Whether the enamel technique is used to highlight bold gemstones or to create the backdrop for motifs and messages, it is now being seen in different variations, which we saw at the shows in Las Vegas and New York and at press previews.

Related Topics: Beth BernsteinFeatured
click to Comment(Comment)
Up Next

Second-Largest Diamond Ever Found Now Has a Name