The slowdown in sales at the start of the year was likely temporary, but shrinking margins appear to be an entrenched trend.

ith January’s data in from our sample stores it’s interesting to see a slight drop in sales for the first time in many months. In fact, we have to go back to March 2014 for the last decline in rolling annual sales – an incredible run of consistent growth over this period.

As the figures show, the decline was attributable to a fall in the average quantity of sales from 284 units to 262 units. Average sale maintained its level of around $285.

The graph below represents the percentage change in annual sales each month. As it shows, there has been a consistent pattern of positive sales growth for the last 21 months before dropping below the line in January. With the exception of a couple of individual months where sales rebounded immediately, there does tend to be a trend of negative growth for at least a few months when this happens. It will be interesting to see the trend for February’s figures as to whether this is an isolated case or the beginning of a trend.

Although sales have been trending upwards over previous months, what has been a concern is the long-term downward trend in margin being achieved across the stores. Below are two graphs: the first showing margin achieved for a period in 2012, and the second being recent numbers. 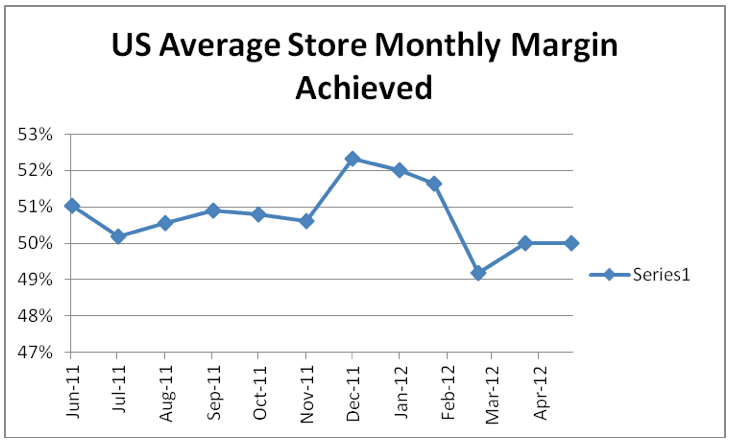 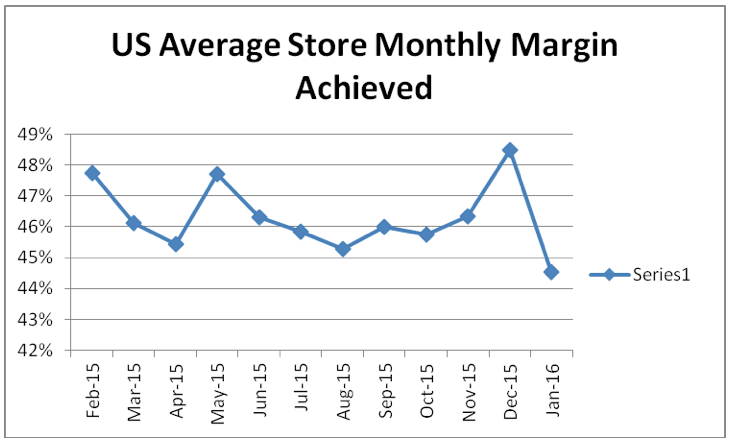 As these snapshots of two distinct periods three years apart demonstrate, the margin being achieved across stores has dropped from a range of 49-52 percent in 2012 to between 44-48 percent in 2015. This is significant; for a store doing $1 million in annual sales, each percentage drop is the equivalent of $10,000 from bottom-line profit. This would mean a drop of around $40,000 in profit if the store had reduced its margin from 51 percent to 47 percent. Obviously there has been offsetting growth in sales over much of this period but profits are still seeping away. Would maintaining margins have resulted in a decline in sales? It’s hard to say. Some of the decline is attributable to a growth in higher-dollar value items being sold (more diamonds); however, keep in mind that this means you are probably working a little harder to achieve the equivalent profit result.

Here are some steps that can help protect your margin: