The store has given away more than 175 necklaces.

With fire raging through Ventura, CA, on the night of Dec. 4, Debbie and George Fox left their home and took refuge in their car, and when they finally could make it to their downtown store, Fox Fine Jewelry, they camped out on the floor there.

Within a couple of days though, before the smoke had begun to clear, the Foxes were looking for ways to help their neighbors, many of whom had lost their homes to the Thomas fire.

“I thought, `Wow, that is so incredible, I wish I could help like that.’ But we were just trying to manage our own selves,” Debbie says. “In the end we decided we would do what we do best; we make jewelry.”

In 2009, Fox Fine Jewelry offered a free “Hearts of Hope” sterling silver pendant to the unemployed on Valentine’s Day, an initiative that garnered tremendous goodwill in the community and, over time, around the country. Years later, recipients return to the store, wearing their necklaces and sharing their stories of how they pulled themselves out of the recession. They still remember the retailer’s kindness that gave them hope during a bleak time, and in many cases have become loyal customers.

This time, they decided the giveaway had to be even more significant to make an impact. So they designed a Ventura Wave necklace with a 5-point diamond.

They wanted to give something to everyone who had lost their home. At first, that number seemed to be about 150. But by Dec. 14, 900 homes in Ventura and Santa Barbara counties had been destroyed. The fire had burned more than 242,500 acres and was 30 percent contained.

And by late last week, 175 people had already come to the store to claim a necklace. Others clamored to buy it. 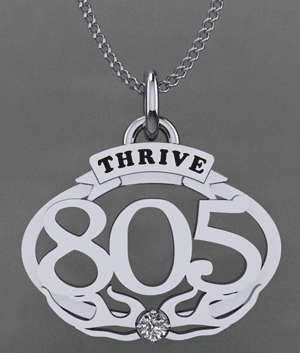 In response to the expanding devastation, George designed a second pendant, too, with the message “Thrive 805,” for the area code, recognizing that the tragedy has spread beyond their town.

Although the Foxes have an extensive in-house shop under George’s direction, Jewel-Craft is helping them keep up with the demand to make as many as possible before Christmas.

“I’m encouraging people who lost their homes to take this as a gift that has meaning in the beginning of their healing,” Debbie says. “Because most of these people in Ventura, at least those who left on that first night, left with nothing.”

Christmas shopping in Ventura is not what anyone expected this December, but Fox Fine Jewelry has seen crowds every day as a result of their generosity.

“All of us on the sales staff are emotionally drained,” Debbie says. “It’s very hard to be there, because people start breaking down and crying when they tell you their story of how they escaped, of how they survived. Every visit takes half an hour. They start talking to other people and sharing their stories.”

They are selling the pendants, as well, and will donate 50 percent of those proceeds to those affected by the fires.

Woman with facemask and free necklaces

Couple with burned up jewelry

“We’re discussing having a survivor party for everyone to have the opportunity to be together,” Debbie says. “One of the most healing things has been for them to connect with each other and tell their stories. Ventura is a small town so many people know each other and even if they don’t there’s an instant camaraderie.”

Of course, Christmas in Ventura won’t be what anyone anticipated. “It is what it is,” Fox says. “You just keep going.”

This story is an INSTORE Online extra.

Related Topics: America's Coolest Storesjewelry stores in California
click to Comment(Comment)
Up Next