WHEN JONI HAMILTON and Shelia Butler dreamed about what their store would look like, they envisioned a comfortable and welcoming spot on the beach with a bloody mary bar. “We didn’t want one of those serious stores with hard woods,” Butler says. “We didn’t want people to be intimidated.”

Hamilton, a Southern California native, and Butler, born in Chicago, met while managing two different jewelry stores for the same owner. They often discussed opening their own store and, at the beginning of 2016, decided to take the plunge. “I put this off for a year or so because I was thinking I was too old, and now that we’re in here, I don’t know what I was thinking,” Hamilton says. “You’re never too old to follow a dream or a passion.”

Now they’re living the dream. “It was meant to be,” Butler says. “We pinch ourselves and say, ‘We have a real store!’ We have sea grass carpeting and pale turquoise walls and a beautiful view of palm trees through two large windows. Even when you’re in the store, you feel like you’re outside at the same time.”

Just steps from Hermosa Beach Pier, their store has become a magnetic hang-out for passersby who come on foot or by golf cart. They love it when people stop by just to visit and enjoy a chilled glass of wine or indulge in the bloody mary bar on Sundays. It’s natural to form lasting relationships in the tight-knit beach neighborhood. “People love the beach community and they don’t leave. They call it ‘the bubble,’” Hamilton says.

Although they are serious about gems, jewelry design and customer service, they want to have a sense of humor about the daily work experience. “I know where I worked for eight years a lot of the men felt uncomfortable,” Hamilton says. “It was a little more austere. All rules are a little different at the beach. It’s a different attitude, more casual and friendly.” And they don’t have to open till 11 a.m.

The collaboration with her friend has come naturally, Hamilton says, and the partnership is crucial to their enjoyment of the endeavor.

“Because Shelia and I both worked for a retail store with two locations, we had the same kinds of issues and problems to solve, but we never really worked side by side,” Hamilton says. But they discovered they share the same taste, flair for fun and business philosophy. “We just look at each other sometimes and say, ‘This was easy!’ We buy the jewelry together, design together, make decisions on branding and advertising together.”

In their previous jewelry jobs, they not only managed but designed as well.

Hamilton began her design career as a makeup artist for NBC and Shelia entered the design field as director of marketing for XOXO.

Avid collectors themselves, they love working with their clients and helping them cultivate a jewelry collection that fits their lifestyles and sensibilities. “Collector is a nice way of saying it,” Hamilton says. “I’m a jewelry hoarder. I grew up near the jewelry district in LA and I used to go down there and prowl. When I started being able to collect some nice pieces, I would get in my head something that I wanted and if I didn’t see it, I’d start putting it together.”

Butler, too, always had a passion for design. “It started with fashion accessories, I just gradually got into the jewelry business and it captivated me. I love drawing and seeing it go from a drawing to reality.”

They design about 75 percent of their inventory and sell other designers’ work with price points ranging widely from $200 to $500,000. The designers they choose to represent in their store resonate with them. “Jewelry creates memories; we want you to feel good and have a piece you wear all the time that you are proud to keep forever and show off,” Hamilton says.

They also specialize in repurposing jewelry. “I love people to bring in a boxful of stuff they don’t wear or that they’ve inherited,” Hamilton says. “We’ll take all the stones out, sell their gold for them so they can put it toward something new or design something new.”

They even designed their own store — almost too quickly — since after they finished they had to wait for the showcases to be built before they could open.

“We just knew how to do it,” Butler adds. “It came naturally.” 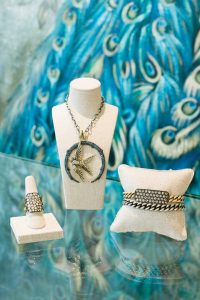 1. FOR THE BIRDS? “I have peacocks running around my neighborhood and I love bird-themed jewelry,” Hamilton says. “We used the feather as our secondary logo. Shelia was like ‘What’s with the birds?’ But she’s wearing the bird jewelry now. I got her into it.”

2. FUELED BY FUN. They’ve found they don’t have to do much to sell people on stopping by or hanging out. “People get comfortable VERY quickly,” Hamilton says. “It’s just a fun store. We’re laughing all the time. People come by for wine and dog treats. They start looking around and leave with a little something. We’re not pushy at all and we have all kinds of prices in here. We have cute affordable things that women can buy for themselves and not feel they are breaking the bank. And then we have $400,000 and $500,000 designer pieces by Sylva & Cie.; we’re the exclusive retailer for her in South Bay.”

3. DESIGNER CONNECTIONS. “Sylva & Cie and Julez Bryant and Suzanne Kalan are designers not usually carried in smaller boutiques,” Hamilton says. “But both of us have been in the business for 20 years and we have these relationships from when some of these women weren’t even designers yet.”

4. MARKETING MOVES. They advertise in regional lifestyle magazines, including South Bay Magazine and Etcetera; they’ve been successful with Instagram and Facebook and the local newspaper, the Beach Reporter.

5. HOUSE CALLS. They do make deliveries. “We love to spoil our clients!” Hamilton says. “From taking them to dinner, sending flowers on special occasions to sending thank you notes, we want them to feel appreciated.”

Try This: Birthday Parties on Demand

Hamilton says a new client enjoyed hanging out so much that she asked if she could have her birthday party in the store. She did and now it’s become a thing. A dozen or so women hang out, shop, enjoy cocktails and food, and the guest of honor is treated to jewelry gifts. They also are able to transport their entire store inventory to at-home jewelry parties, where they partner with the host to donate a percentage of the profits to a charity of their choice. They also donate jewelry for silent auctions and gift certificates to a range of charities in the area.

When Co-Founder Died During Construction, His Wife and Daughter Completed This Cool Store