A designer’s retail store blends Soho with the Hamptons

CLIENTS HAVE BEEN KNOWN to pack up their jewelry boxes, and travel by private jet or sailboat to visit Glenn Bradford, who has cultivated a reputation for reimagining tired family jewels.

Although he’s not naming names, some of his globetrotting followers are celebs.

“We know musicians, actors, writers, who got to know us when they bought our pieces from Saks or from Beverly Hills retailers,” Bradford says. “We have a beautiful following of celebrities, but we treat every client like a celebrity. Everyone is treated to the same rich experience.”

Bradford, a jewelry designer since 1987, first opened a retail shop in 2001 in Roslyn, NY, and then moved into a freestanding destination store in 2004 in Port Washington, an area known as the Gold Coast of Long Island.

And destination store it is, located in a popular and quaint town with one of the busiest ports in New York State. The store is on Main Street in a historic 1924 Queen Anne landmark building situated in Port Washington’s harbor district.

Bradford knew from his guest appearances at trunk shows all over the world — at stores including Neiman Marcus, Harrod’s and Barney’s — that he loved talking to collectors directly. Opening a retail store was long a goal.

“It was always in our vision that I could have that kind of experience on a daily basis,” he says. “We built major jewelry collections that we wanted to showcase in an environment that was all about our sensibility. We wanted to create the whole experience.”

“We” is Glenn and his wife, Sharyn, an artist and interior designer, who seamlessly shares his design sensibility. She created the store interior as well as the logo that is carved into each cocktail and engagement ring that Glenn makes.

“We are synergistic,” Sharyn says. “Our aesthetic sensibility is virtually the same and it runs through the jewelry and the interior design — everything. We are the ultimate soul mates.”

There are few barriers between work and home life.

“It’s so blended,” Glenn says. “It’s not a 9-to-5 job. Off-hours at home, we’re always creating. We have a coffee meeting every morning in our living room, and our marketing ideas come out in these meetings. If I’m struggling with a design, I dream how I’m going to create it in my sleep. We live and breathe our business. We’re both prolific writers. Everything that you see from our brand book to our color catalog to press releases, those emanated from us.”

Their store is blessed with an original tin ceiling, four 10-foot bay windows, 16-foot ceilings and Douglas fir floors, which they restored. Visitors, they say, describe it as a happy marriage of Soho and the Hamptons. They’ve blended antiques and modern décor for an eclectic effect.

The walls are painted with blue and off-white free-hand stripes, and are adorned with Sharyn Bradford’s oversize colorful canvases from her recent gallery show, “Thoughts in Pose.”

Glenn says custom-made wrought iron displays, found objects and repurposed cases set their store apart from the retail pack. “We put our best effort into every detail of what we do,” he says. “We pride ourselves on having a rich visual experience so that when you walk into our shop you know it’s a Glenn Bradford space. There’s a creative, relaxed vibe in here.”

The jewelry they display and design also sets them apart.

Glenn spends hours with clients, going through their family jewelry — often broken and dilapidated — to figure out what has a “valid design” already and what needs to be completely reworked. (“So much design is dated and yucky,” he says.)

“Whatever can be repurposed, should be repurposed,” Glenn says. “We never, ever take the customer’s gemstones. We’re reinventing what they have. Their history, the legacy of their ancestors, is preserved, and then we go on to the process to design something new.”
The Bradfords plan to expand their retail concept by adding another location by the holidays and also relaunching the wholesale line for other select retailers with whom they have a relationship.

Future locations will replicate Glenn Bradford signature branding and marketing and share the original’s relaxed vibe, but the store’s design won’t be a knockoff, but will complement its environment.

“We will have an organic process for whatever space we choose,” Sharyn says. “We will meld with the space, become one with the space; we’re not going to dictate to that space.” 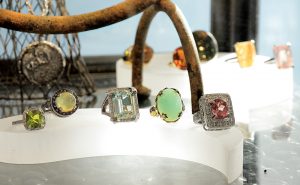 1. HISTORY ALL AROUND: The store’s aesthetic resonates thematically with its merchandise. When the Scholzes took over the space — originally a gas station — they pulled out drywall and the drop ceiling to reveal old bricks and support beams. Instead of laying til e or hardwood over it, they polished the concrete floor. As a result, the space teems with character.

2. DOING ONE THING REALLY WELL: Of St. John & Myers’ 16 showcases, 14 are devoted to antique and estate jewelry — pieces made between 1850 and 1960. That’s been Louis Scholz’s passion for years. Occupying a niche like that simplifies things, Olivia Johnson Scholz says. “It drives the customers you actually want. I feel like the people who find us are already prequalified, because they have an affinity for antique and estate jewelry,” she says. “Those who don’t, I don’t miss those sales. They’re better served by someone else.” There are other benefits, too: “I often tell people that if you’re on a budget, your budget goes a lot further in an estate piece than it will in a modern store.”

3. A TOUCH OF MODERN DESIGN: Tucked within the store’s more old-fashioned setting is a 200-square-foot custom design studio, set off with white walls and cases and modern lighting — the basic look is a riff on the Apple Store, meant to signal its more contemporary role. “It’s important to offer that because that’s what people want right now,” Olivia says. The studio highlights St. John & Myers’ “Oui!” custom house brand and features 400 loose gems, many rare, from Louis’s own collection.

4. LOOK AT THAT: “I still maintain that we’re the only jewelry store in America with these,” Olivia says of the two large, custom-made tilted “walk-by” mirrors in the showroom, angled to give shoppers a realistic look at how a piece of jewelry looks on their whole person. “People aren’t used to [the mirrors], but even those who doubt the validity at first take a look and then go, ‘Oooh, I see what you mean.’”

5. LOCAL LIBATIONS: This is Kentucky, so while the store does have wine and champagne on hand for clients, there are about 10 different pricey bourbons at any given time in the sitting area. “At Christmas time, we had candy-cane bourbon, which was well received,” Olivia says. Louis also worked with a local chocolatier on a secret recipe for the store’s custom bourbon balls. The confections make great gifts for VIP customers.

Sharyn searches for interesting props for displays and artifacts she can transform into showcases. An antique birdcage, for example, holds the South Seas pearl collection.