When interior designer Leslie McGwire is considering a store’s style, she starts with the floor and works up to the ceiling for a final flourish. A ceiling centerpiece can be a piece of art, illuminate shadowy corners or reflect accent colors elsewhere in the store. It can even pull shoppers into an area you want them to go, such as a diamond room.  Owners and designers of these featured jewelry stores recognize the importance of  creating a dramatic focal point.

For Adlers, designer Leslie McGwire used black as an accent color throughout the space — in sconces and jewelry cases — and decided it was very important that the chandelier have a black element as well. “This is a style that works for traditional or contemporary,” she says. “It has the crystals but also has the beautiful fabric shade on it. It’s such a focal point.”

Creating Andrea Riso’s ceiling was a herculean task. For one thing, 52 contractors turned down the task of hanging a 2-ton “Sky,”— a 200 square-foot, blown-glass platter tray created by artist Robert Kuster — before Riso found one willing to take it on. It was important to replicate a blue sky over the diamond counter, Riso says, because she learned during GIA diamond certification courses to take a break every hour or so from studying diamonds to gaze at blue sky or green grass. Doing so rests the eyes and the central nervous system and allows the viewer to see the details in diamonds. Then there’s “The Sun,” a 1,500-pound, 8-by-8 foot mouth-blown glass fixture, also by Kuster. The center of the sun is a custom cast bronze metal orb with 122 numbered pieces. Each ray of glass is hollow and at least 4 feet long.

At Wear Your Grace in Santa Fe, NM, owner Hillary Randolph is hands-on when it comes to store design. Her unique fixture, which she found shopping in Round Top, TX, was made from a grapevine that was steamed, coiled, shaped into an openwork globe, and re-dried. She took it home, painted the bottom of it with gold leaf and attached 100-year-old faceted crystal drops from France. The table below it is also painted with gold leaf so it appears as if the crystals are dripping gold. It complements the interior design, with its gold-on-white palette and a tromper l’oeil tangerine curtain painted across the back wall. 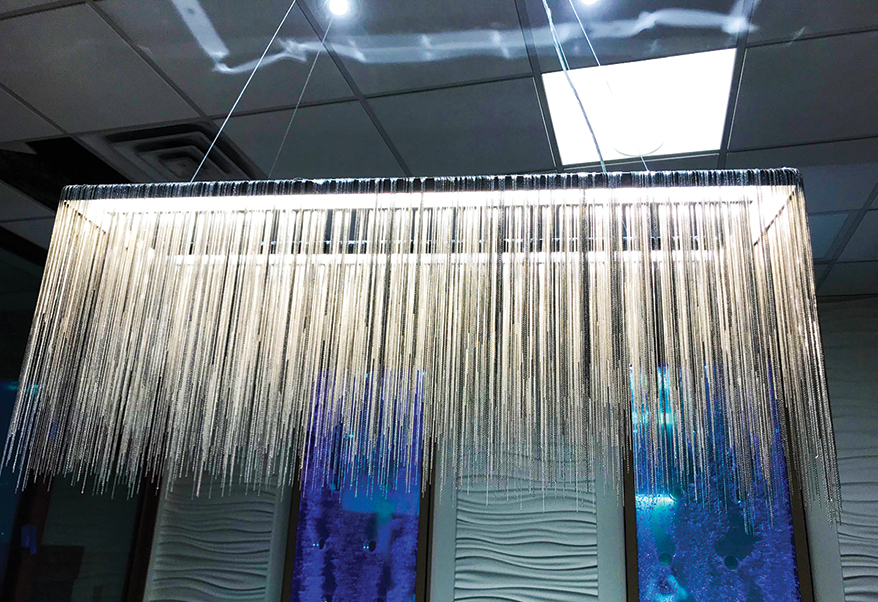 Ginger Clarke found her showpiece of a chandelier on a road trip to Dallas while in the midst of a 2017 renovation directed by store designer Ruth Mellergaard of GRID/3 International. The scale is unusual, Mellergaard says, at 48 inches long and 12 inches wide. It also stands out because it has a jewelry aesthetic, and it’s positioned directly above a walk-around case at the front of the store, where it’s immediately visible. “It wasn’t even in our plans,” Clarke says. “I just ventured into a high-end furniture design store and knew it was meant to be the finishing piece.”

In 2004, after a fruitless, frustrating search for three matching vintage chandeliers for her Soho shop, Perry found her dream fixtures online. They were new, colorless, Venetian, and she could buy three — which were needed for the long narrow space — for the price of one antique. They were so distinctive they became a standout feature closely associated to her brand. When Perry moved to a new location in the West Village, she knew she couldn’t leave them behind. They now have a place of honor in their new home, hanging from a suspended beam attached to the ceiling. For an unexpected, quirky contrast, the space also has a fabulously funky, ‘60s-style light fixture just beyond the collection of elegant chandeliers.

The interior of this Bernie Robbins Jewelers’ location, which opened in 2015, is crowned with a custom-made, Dale Chihuly-inspired blown-glass chandelier, which receives daily compliments and which was surprisingly affordable, says owner Harvey Rovinsky. After visiting several lighting companies, everything seemed either ho-hum or pricey, but when Rovinsky saw this piece from Richard Hill of HIll’s Lighting Co. in Florida, he had “an epiphany.” It’s designed to simply screw together, and Hill custom designed it to coordinate with the store’s interior palette. “Fixtures not even close to having the drama of this one were much more expensive,” Rovinsky says. “The first time people see it, they really freak out.”

Belle Jewelers’ ceiling is illuminated by Restoration Hardware chandelier fixtures with individual crystal beads that were assembled on site. “The whole design of the store is very transitional and this is a transitional look for a chandelier,” says designer Leslie McGwire. “They wanted some sort of crystal, but it’s not a typical chandelier crystal. It’s a statement piece. I look for something that’s more of an art piece than a chandelier, so you don’t see a lot of the light bulbs and it looks pretty on all sides.”

Casale Jewelers on Staten Island boasts two large traditional chandeliers (70 and 45 pounds) that add a grand contrast to the otherwise low-key interior. Joshua Marshal in New York designed and manufactured the Egyptian-crystal chandeliers through his company, wegotlites.com, which imports parts from around the world and assembles them in New York. The style is called Maria Theresa. “It’s a very inexpensive way to really dress up a space,” Marshal says. “Not only with the light, but with the beauty. They’re very transitional and bring a classy high end look to any space.”

6 Jewelry Window Displays You Have to See to Believe

See How 8 Top Jewelers Set Up Their Bridal Sales Areas

Pantone Names “Viva Magenta” Its 2023 Color of the Year