FOR A JEWELRY STORE with a 130-year history of bold moves, this was one of the boldest. After more than a century of service as Knoxvilleʼs leading jeweler, and having expanded to four different locations, store chairman John Overbey decided in 2003 to consolidate to a single location in a fast-growing area of their southern city. Did the gamble work? Early indications point to a resounding “yes!” Kimballʼs brand-new store, which opened in 2004, is a modern masterpiece that combines old-world luxury with a touch of southern hospitality.

A Look inside Kimball’s Jewelers

THE HISTORY
130 Years of Service

Kimballʼs Jewelers has its roots back in the 19th century — born from a company, Hope Brothers Jewelers, which was incorporated back in the 1870s. From its earliest days, Hope (and later, Kimballʼs) had a prime location in downtown Knoxville. Kimballʼs was incorporated in 1933 and emerged as Knovilleʼs premier jeweler. But it always retained a strong sense of its history — preserving a European street clock and handmade walnut cases from the Hope Brothers era.

A new era in the companyʼs history began in the 1970s, when Jim Overbey bought into Kimballʼs. As company chairman, he expanded the business to four locations in the Knoxville era. However, by the 1990s, downtown locations were rapidly losing their luster and Overbey decided to re-evaluate his plan. He decided that all the stores would be consolidated into one large, upscale new building on Kingston Pike, the new epicenter of Knoxville, “on the top of Bearden Hill”.

The enormous, two-story store began construction in 2003 and the was opened in July 2004. Besides the luxurious decor, and all the space, there was one other big benefit: spectacular views of the Smokey Mountains and the Tennessee River.

And despite all the changes, Kimballʼs Jewelers still managed to maintain its ties to the past, even retaining from the old store the handmade walnut cases and the old street clock which has, over the years, become a Knoxville landmark.

Says Danny Overbey, the storeʼs CEO: “For the 50,000 commuters who drive by our store each day, we can help them make sure theyʼre going to continue to enjoy a city landmark and a clock that has been a part of our cityʼs history for over 130 years,”

THE CONCEPT
Re-Creating a Landmark

“We all worked diligently to create a ʻcoolʼ concept,” says Dannyʼs wife, company president Kim Overbey. Input from staff at Kimballʼs, as well as consultants Dan and Lori Askew of The Vantage Group, contributed to the final design.

The sheer size of the store presented a major challenge: how could you maintain intimate relationships and provide truly personal service with customers in such a big store? The Overbeys decided to make the entire first floor dedicated to shopping areas while the second floor features offices, private showing rooms, and a large room for store events complete with a walk-out patio atop the portico.

“The reaction to the new store has been phenomenal,” says Kim. “It has been very positive and the mid-town renaissance has sparked a lot of interest and development of the area, which is thriving and drawing the attention of both local and national companies and their owners.”

Kimballʼs new location radiates both Southern charm and Old World elegance. From the handmade walnut cases to the historical archives located near the diamond counters, the store is full of history.

Warm European colors predominate in the interior and the custom faux finish on the walls is an example of the attention lavished on every detail of the store. Italian tile in taupe and rich greens mark the center of the store, where the cases were modelled upon the original cases made in the 1800s, before dissolving into a delicious chocolate and taupe plush carpeting.

Wrought iron scrolls, accent tiles, and heavy crown molding add to a feeling of comfort and welcome most often associated with a southern plantation. The Waterford chandelier tucked into the expansive 15-foot ceiling furthers the illusion — as does the custom-made stained glass dome designed and coordinated by Danny and Kim over many months of painstaking decisions.

Across the back, a wall of windows allows customers to watch Kimballʼs jewelers perform their art. Customers often browse the gift area, which also provides a sitting area as well as a fireplace equipped with a custom made mantel. Heavily molded built-in showcases in this area contain gift lines such as Waterford Crystal, Wolf Designs, Mariposa, Ragar Designs and Swarovski.

The double-hung, floor-to-ceiling Palladian windows framing the front of the building are illuminated by wrought iron chandeliers visible from curbside. The entry foyer, like the diamond viewing room, welcomes visitors with light from a three-tier Waterford chandelier. Lighting throughout the store consists mainly of high-intensity metal halide lighting installed and specifically positioned to illuminate each and every case.

Doors and walls were designed and chosen to complement the curves and rounded edges of the original cases. The wall behind the customer service area curves beautifully in a massive expanse of rich green, gold and black granite visible throughout the entire store. And there are numerous other details, from the fire place hearth to the circle-shaped work area, that add to the old-fashioned charm and elegance of the store.

Keenly aware of their traditional-minded market, Danny and Kim downplay their storeʼs many high tech features. Although sales associates routinely use laptops as selling tools, they are not intended to be prominent elements in the storeʼs interior. “Staff members use everything from wireless Net access to Power Point presentations on laptops,” says Danny. “When we built the store, many other jewelers were putting in computer kiosks. We thought that was kind of passé and wanted to be more discreet with computers on the sales floor.”

Kimballʼs employs an in-house IT technician to keep the storeʼs array of technology running smoothly. Back in the bench room, the storeʼs jewelers enjoy many modern high-tech conveniences as well — including a state-of-the-art laser welder and computerized engraving machine. Thereʼs even a photo studio to photograph custom pieces, as well as archive pieces as theyʼre being created.

The owners of Kimballʼs Jewelers — Jim, Danny, and Kim Overbey — are truly proud of their store and and its long history. In addition to being part of a long jewelry tradition in Knoxville, Danny Overbey takes pride in being an active member of is community. In the store, the conference room houses photos of the old family stores, as well as historical photos of Knoxville.

For a man who is surrounded by a store of such immense size and opulence, Overbey speaks in surprisingly measured and modest words about how humbled he is by his good fortune — much of which he attributes to the generations before him, especially his father. “I have always admired my father both as a young man working in the store and as one of the leading executives in the company today,” he says. “He has taught us that people skills and honesty are what make Kimballʼs ʻcoolʼ.”

The 25-member staff of Kimballʼs Jewelers sells everything from high-end name brands like Rolex and Mikimoto, alongside highly regarded names in diamonds and jewelry including Kwiat, Roberto Coin, Simon G, and JB Starr. “Our collective approach to selling jewelry is to offer quality merchandise with fair pricing, excellent customer service, giving honest responses and never jeopardizing our integrity,” says Kim.

Kimballʼs staff is a mix of experienced veterans, some with up to 35 years experience with the store, to eager new hires. Says Kim: “Our staffʼs most redeeming quality is the personal approach that is taken with each and every customer. We believe in personalized service and never allowing anyone to leave our store unhappy or dissatisfied.”

In order to better serve Kimballʼs customers, education is promoted. “The staff is encouraged to participate in AGS and GIA training courses, as well as utilizing the resources made available by these establishments,” Danny added. 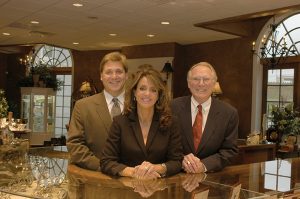 Related Topics: jewelry stores in TennesseeKimball’s Jewelers
click to Comment(Comment)
Up Next