Destination store makes room for everyone, even in challenging times.

WHEN THE RAMSEYS built their highly visible showplace of a store on the main road through the New Orleans suburb of Metairie, their driving motivation was to bring everyone back together under one roof.

“Many years ago, we made the mistake of moving the inventory buyers out of the store,” says Robert Ramsey, who owns Ramsey’s Diamond Jewelers with his sister, Lori. While the offices were close to the store and communication still flowed, something was missing. “Now being all under the same roof, our synergy is at its best.” With the new location, it’s easier to give a customer a custom quote on the spot, change a marketing message and discuss inventory needs with buyers.

As it turned out, the sprawling, airy space also adapted well to keeping everyone safe during a pandemic. The elegant porte cochere became the ideal spot for curbside pickup. A state-of-the-art ventilation system can be adjusted to bring in copious amounts of fresh air. With plenty of square footage, Ramsey’s has been able to accommodate shoppers even when foot traffic was restricted by circumstance or by law.

Once pandemic stay-at-home orders were lifted in Louisiana last spring, Ramsey divided the staff into two teams that alternated their time in the store and took precautions to make his staff feel comfortable enough to return. He had learned from his experience with the disruptions of Hurricane Katrina that closing a jewelry store can be a disservice to clients who still need gifts, want to get engaged or are awaiting their custom pieces or heirloom repairs.

“We knew we had to be there for them,” Ramsey says. 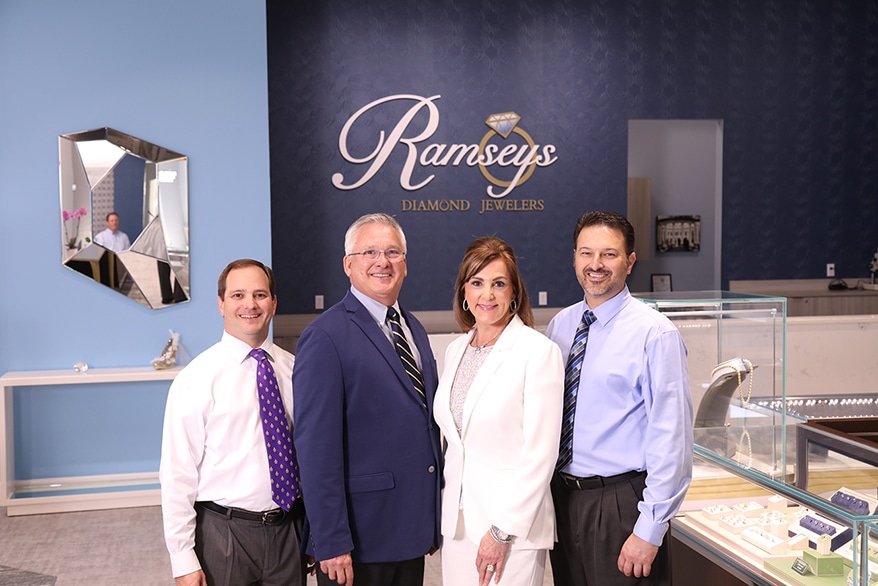 From left, Bobby, Robert and Lori Ramsey, and Sean Bradford, director of sales.

One of the hardest changes to make was to not offer clients a beverage and a freshly baked cookie, as was the hospitable norm. But the designated guest coordinator was still ready to greet them, to learn what brought them in and pair them with an appropriate sales consultant.

With all of those measures in place, Ramsey’s had a great fall.

“We believe people who are going out to go shopping are real buyers,” Ramsey says. “You’re not going to go to as many places as you used to go shopping. We find with lower traffic, fewer shoppers and more buyers, guests get to have a quality experience.”

Online sales picked up significantly, too, especially in the gift and self-purchase categories. In store, there’s been a strong demand for engagement rings and anniversary jewelry, with price points increasing by about 10 percent.

In 1958, Robert and Lori’s father, Bob Ramsey, opened a jewelry business in New Orleans with $900 dollars in his pocket. Unable to afford inventory, he leveraged his designer’s eye and craftsman’s touch to create custom jewelry for some of New Orleans’ most established stores, becoming known as the jeweler’s jeweler. In 1972, he opened a 900-square foot store in Metairie. Eight years later, Robert and Lori joined the business.

“I can remember our first location,” Lori says. “We’ve been around a little while now. It’s special to us when the grandkids and the great-grandkids of our first customers come in. Or when somebody comes up to tell us, ‘Your dad made me this ring.’ And now we have Robert’s son, Bobby, in the business, who is our third generation.”

In 1993, marketing consultant Roy H. Williams suggested that if they wanted to grow, they had to move. At that point, with every dollar they had in the world, the Ramseys built a 3,000 square-foot freestanding store and, as they tell it, held their breath with their fingers crossed.

Sales more than doubled that year as they learned the value of a highly visible location.

In 1996, they decided a diamond specialization would add impetus to that growth. Today, there are 50 showcases in the store filled with diamond jewelry.

During the next 15 years, revenues increased tenfold and the team of five grew to 33 people. Then, due to lack of space at the 3,000 square-foot store, they moved administration off-site and began searching for a new, equally visible location with even more space.

The perfect location turned out to be an 8,400 square-foot restaurant, which they gutted to the studs and transformed from a dark, shadowy place to a bright spot on the Metairie map. A whitewashed brick veneer on columns and soffits pays homage to New Orleans’ French Quarter, as do the Bevolo brass gaslights that are a hallmark of the city.

The floor is divided by a main path bordered by two different carpet patterns, which serves to separate the bridal area from the space where other types of diamond jewelry are offered. Wall niches contain Ramsey’s historical photographs and show off the founder’s antique jewelry-making tools. Multidimensional surfaces and a 3D mirror generate additional interest adjacent to a display at a counter where customers can sit, have a drink, and look through windows into the jewelers’ workshop.

Customers can also have a seat in private booths while they try on selections from the thousands of diamonds and ring styles in the inventory. 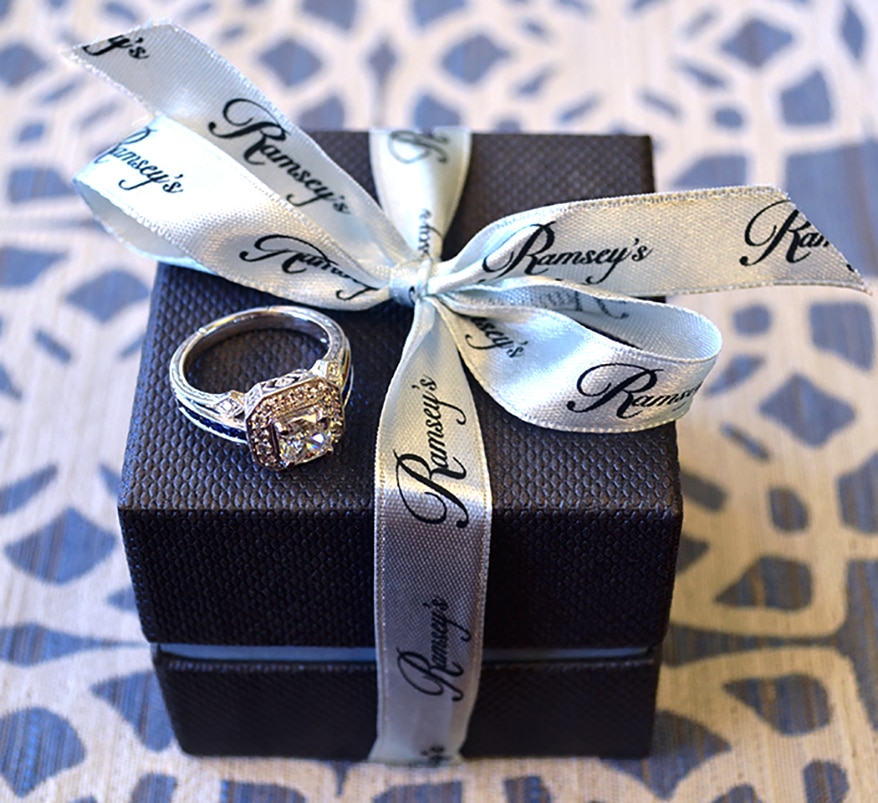 Choice is important to Ramsey, whether he’s buying diamonds overseas or selling those hand-selected diamonds to clients. He believes his customers want to see diamonds in person before they buy them just as much as he does.

“We don’t expect our engagement ring business to ever be dominant on the web,” he says. “We encourage people not to buy a diamond on the web, even from us, but to come look at the stones side by side. I’ve been buying diamonds for 45 years and I want to see them side by side.”

That includes lab-grown diamonds. “We don’t try to influence it either way. Our store is all about options.”

Most years, Ramsey’s sells engagement rings and wedding bands not only to local residents but also to clients having planned destination or spur-of-the-moment weddings in New Orleans. “We’re always amazed we get people from different cities who find us for engagement rings and wedding bands,” Robert says. “Sometimes the wedding is the next day. They fly in, drop into the store and pick up the ring after we set the diamond. We’ve had them get engaged on the showroom floor and celebrate in a booth, drinking champagne.”

Robert attributes 1,300 positive Google reviews to his team’s listening skills and to price transparency. “There’s almost never a negative comment about anything, which speaks to the brand affection Ramsey’s has built over the years.

“Staff really cares and takes it personally. Nobody likes it when a customer is unhappy. We believe in listening, and listening is what a lot of places don’t do,” he says.

“Too many places don’t have price integrity, meaning they put a price on something and depending on the person or circumstances, the price they offer depends on what they think they can get out of the person. Or they inflate prices because they want to run bogus sales. We believe in putting the real price on every piece. People shouldn’t have to negotiate.

“We believe their time is valuable.”

2. THE INVENTORY EDIT. Having a large selection makes editing inventory particularly important. “We analyze our inventory by what’s turning, what’s trending and what’s not, so if we say we’re going to reduce a category, we are really careful,” Robert says. “If we did it too thin, then we’d lose out on choices.”

3. EYE-POPPING VISUALS. The Ramsey’s team doesn’t use much vendor photography for social media, preferring to have a photographer on staff to shoot jewelry in local settings. For instance, says Robert, “She’ll shoot pictures of our NOLA collection items on a local plant that’s blooming at certain times of the year or pine cones that grow locally in the fall. In other words, we reinforce we’re local.”

4. RADIO ACTIVE. Airing massive radio schedules on virtually every radio station in New Orleans 52 weeks a year for the past 25 years, Robert and Lori Ramsey have become like Charlie Brown and Lucy in the Peanuts comic strip. Lori’s infamous “Oh brother” is as memorable as anything Lucy ever said to Charlie Brown. Inspired by Tony the Tiger’s “Kellogg’s Frosted Flakes are Grrrrreat!”, Roy Williams’ signature radio tag line is “Rrrramseys Diamond Jewelers.”

5. DIAMOND DASH. In 2019, Ramsey’s hosted a “Race for the Ring,” a digital treasure hunt that awarded the winners a $7,500 engagement ring. The event, which involved hundreds of participants, took place in downtown New Orleans and used technology to deliver clues and GPS locations of the answers.

The spacious vestibule in the store includes an 8-foot-by-4-foot frosted glass dry-erase space where the Ramsey’s team writes both profound and silly messages for their guests to read. People pop in regularly just to see what is written on the glass.

“Quit thinking of your business as ‘seasonal,’” says Robert Ramsey. “People get engaged every day. Every day is someone’s anniversary. And every day, people want to surprise the person they love with a gift they will cherish forever. The goal of advertising is not to drive traffic but to cause your store to be the one the customer thinks of immediately – and feels the best about – when they finally need what you sell. Think long term, measure long term. Short-term thinking is for small-minded people.”

Related Topics: Featuredjewelry stores in Louisiana
click to Comment(Comment)
Up Next

Retailers’ Plea to Biden: Give Us Time for Vaccine Mandate

Ask an Expert: Responding to Every Alarm with Peace of Mind