IGJA has become one of the foremost recognition platforms for the jewellery sector in India to encourage exports and award excellence in manufacturing, finance and innovation. Several luminaries from the gems and jewelry sector were present on the occasion. Sevantilal Premchand Shah (Founder Partner, Venus Jewel) won the Lifetime Achievement Award. State Bank of India, IndusInd Bank and Vijaya Bank also won awards in Best Banks Financing the Industry. Sunita Sekhawat won the Woman Entrepreneur of the Year Award.

Shri Praveenshankar Pandya, Chairman, GJEPC, said, “In the golden jubilee year of GJEPC, the India Gem and Jewellery Awards 2016 are more special than ever before. The emphasis is on 360-degree excellence by going beyond turnover and evaluating performance based on all-round excellence, ensuring transparency through third party assessment and incorporating awards in new categories. IGJA, which is the oldest awards scheme in the gem and jewellery industry, has stayed relevant and popular for more than four decades.”

Smt. Nirmala Sitharaman, Union Minister of State for Commerce & Industry, Government of India, said, “It is heartening to learn that the Gem & Jewellery Export Promotion Council is organizing the 43rd edition of the India Gem & Jewellery Awards to recognise distinguished industry players and financing banks for their contribution and excellence in the gems and jewelry sector. The gems and jewelry industry has emerged as an important sector for providing livelihood to a large number of people. It has contributed significantly to India’s exports and is an important player in the country’s economic growth. India is an acknowledged leader in the field of diamond processing. It is a matter of great pride that being the world’s largest manufacturer of cut and polished diamonds, India is now becoming a leading international hub for the global gems and jewellery industry. The synergy between a skilled workforce, dynamic industry leadership, proactive Government policies and adoption of modern technology has helped this sector gain such eminence. My best wishes to the Council and the awardees.”

Shri Devendra Fadnavis, Hon. Chief Minister, Maharashtra, said, “It is praiseworthy that the Gem & Jewellery Export Promotion Council is celebrating its golden jubilee this year. GJEPC has taken various initiatives for skill upgradation and removal of trade-related issues. Since ease of doing business is the mantra of the Central and State Govt, we shall support the gem and jewelry industry with respect to the state-of-the-art exhibition center, Jewellery Park and Gems n Jewellery University. The gem and jewelry industry has shifted to different areas but Mumbai holds its own identity due to gems n Jewellery. Maharashtra State Government is committed to work shoulder to shoulder with trade as this industry creates value and is the most valuable industry. We shall talk to Union Finance Minister and GST Council to support the GST-related demands of the G&J industry. We welcome unconventional universities, which will add Human Resources and innovation to help us to lead the world in jewelry exports. India Gem & Jewellery Awards help industry stakeholders to get recognition and inspire others to do their best and excel. After all, the capital of 21st century is excellence!”

Shri Kirit Bhansali, Co-Convener IIGA 2016 Committee, GJEPC, said, “The IGJA event unites and recognizes the business performance of the top players in each category. The Awards also encourage MSME sector as well as honour numerous women achievers so as to inspire many others to excel. Despite the numerous disruptions in 2016, we have received a phenomenal response this year with nearly 300 nominations from all across India We are grateful to our jury members for scanning all the entries and identifying the top performers.”

Jury member Smt. Nirupa Bhatt, Managing Director (India &amp; Middle East), GIA, said, “2016 was the year of disruption and challenges and it is heartening to see that the nominations were characterized by two key themes – digital and innovation. GJEPC members harnessed technology and its applications to create innovation in tough times as part of their entrepreneurial spirit. If India has to retain its leadership position in the global diamond business, GJEPC members have to dynamically evolve through usage of digital and analytics. I would like to see more women entrepreneurs participating in the special category reserved for them in IGJA Awards and the strategic narratives herein will encourage many budding entrepreneurs. GJEPC should facilitate and encourage the use of technology and digital platforms to stimulate innovation.”

Jury Member Shri S. K. Mishra, former Dy. MD & CIO, State Bank of India, said, “During my debut as a Jury member of GJEPC’s IJGA Awards, I am happy to witness the intense competition and investments made in innovative technology! Considering that many exporters fall in the MSME categories, it was wonderful to have over two-thirds of the entries from small and medium enterprises. In addition to the strengthening of online platforms such as websites and social media, this year, GJEPC members enhanced their digital platforms and tools to integrate them into their holistic business strategy. Many GJEPC members have started giving a lot back to society through sustainability initiatives.”

Jury Member Shri Pawan Bindal, Director, Dun & Bradstreet, said, “D&B is happy and proud to be associated with GJEPC for the fourth year in a row. Inspite of tough times, IGJA Awards 2016 attracted nearly 300 nominations. The active participation reflects the collective aspirations of members to stand up and be counted as first amongst equals even amidst challenges.”

The GJEPC 43rd Annual Awards, exclusively open for GJEPC members, will felicitate award winners for their exemplary performance on key parameters like growth, export excellence, marketing initiatives, innovation, value additions and investment in R&D, among other attributes, during the year 2015-16. A proprietary quantitative model developed by D&B, will be used to short list the award winners, based primarily on computation of composite scores calculated by considering various financial and quantitative indicators. The final set of award winners will be chosen by the esteemed jury.

Salient features of IGJA 2016 include: Continuation of the introduction of small, medium large category in diamond &amp; precious metal with an objective to encourage entrepreneurship at every level and recognize MSME sector; Minimum number of application criteria to make the process more robust and ensure fair competition; Minimum export criteria to bring in more clarity & transparency to nominees; Awards to foreign buyers to recognize their contribution to Indian Gem & Jewellery Industry; Third part assessment – Appointment of D&B to ensure the selection process moves to the next level by an expert organization who will bring in more transparency and authenticity in the selection process of the awardees; Introduction of Jury process, representing from different fields to ensure judging on broader aspects at the time of finalizing the winners.

GJEPC’s India Gem & Jewellery Awards, remodeled in 2014, has gained recognition and popularity from across the country and the world. Besides recognizing the efforts of the exporters, the Council will also honour the top foreign buyers from across the globe, international trade associations and the banks financing the gems and jewelry players. In addition to the acknowledgment of their global standards, GJEPC awards those who contribute to the overall benefit of the Indian gems and jewelry industry.

Set up in 1966, the GJEPC has over the years effectively molded the scattered efforts of individual exporters to make the gem and jewelry sector a powerful engine driving India’s export-led growth. This apex body of the gem & jewelry industry has played a significant role in the evolution of the Indian gem and jewelry industry to its present stature. GJEPC is continuously working towards creating a pool of artisans and designers trained to international standards so as to consolidate the Indian jewellery industry and establish it as a prominent global player in the jewellery segment.

With strength of 5,200 members spread all over the country, the Council is primarily involved in introducing the Indian gem & jewelry products to the international market and promotes their exports. To achieve this, the Council provides market information to its members regarding foreign trade inquiries, trade and tariff regulations, rates of import duties, and information about jewellery fairs and exhibitions. 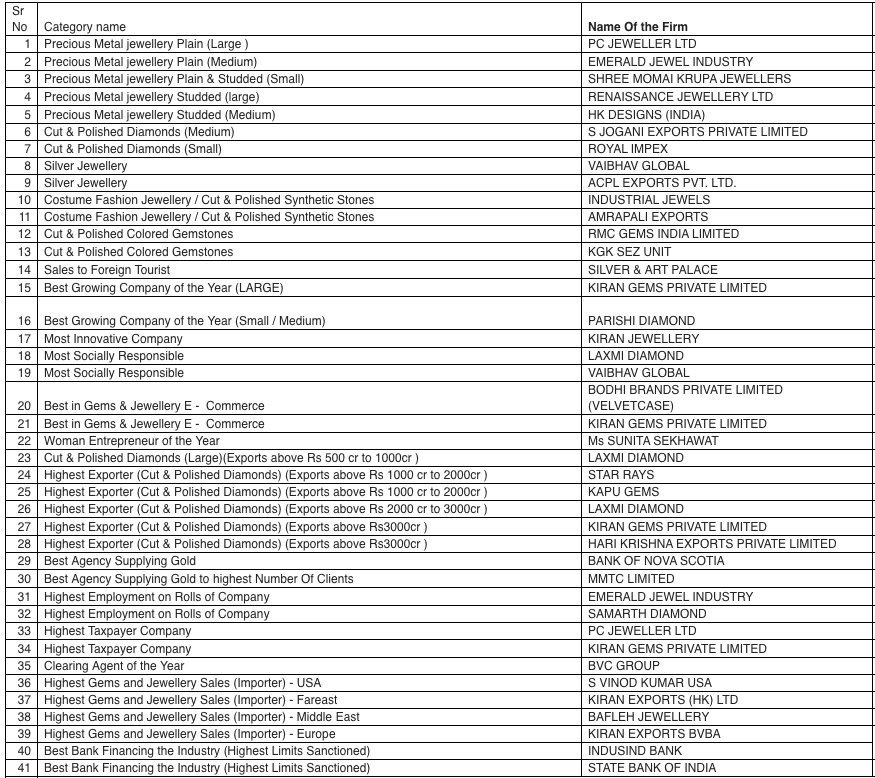