Passersby enchanted by that tempting array are welcomed inside by owners David and Ronnie Malka, who offer guests a warm greeting and refreshments from the coffee shop across the hall.

Adding to the relaxed environment, they rarely ask for the prospective customer’s information right away. “Our customer is our friend. Just like you don’t ask someone you just met for all of their information, you really should try to take the same approach with your customers,” David says.

Once guests have a chance to settle in and look around, graduate gemologist David loves to share what he knows by comparing loose diamonds at his desk. What makes the Malka experience distinctive is that David includes tricks of the trade in his consumer education, such as explaining what kind of diamonds people in the jewelry business might select for themselves.

“A lot of people who are thinking about buying diamonds online have done some research, and I like to educate them on the stuff you can see in a diamond that you should pay for,” David says. “The stuff you can’t see, why pay for it? Common sense goes a long way when you’re spending thousands of dollars. Great, if you want to buy a VVS stone, we have it, but most of the people who see the difference, or don’t see the difference, between D and F color are making a much more informed purchase, and they feel good about it.” 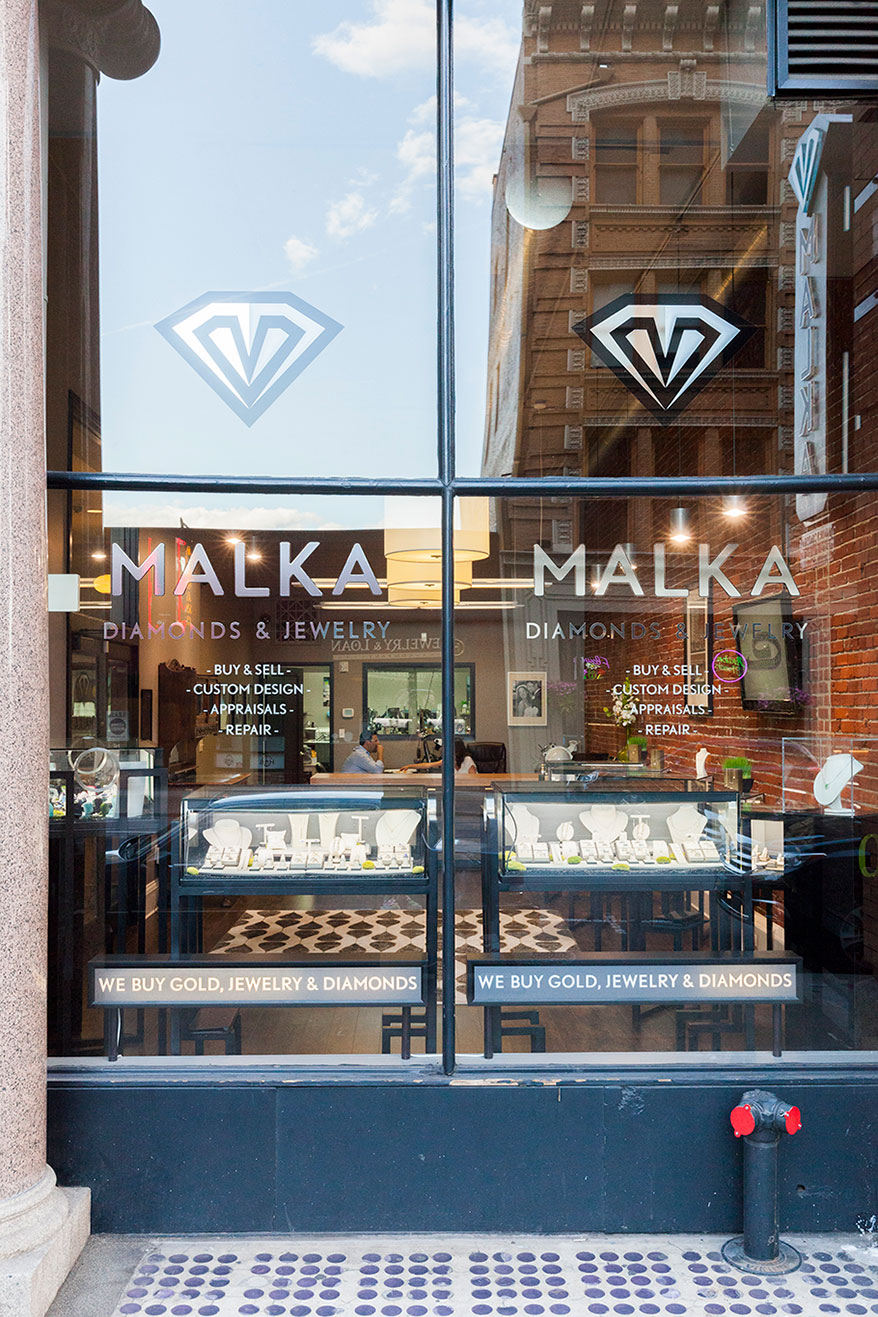 Large windows allow passersby to glimpse a mix of vintage and new rings on display while flooding the space with natural light.

They’re also adept at explaining the difference between the diamonds and their paperwork. “The cert says XYZ, but if you lined it up with five others, you might see why that stone was priced so low in its bracket,” Ronnie says.

They think it’s just fine if their customers walk out without buying anything on their first or second visit — even if they’re headed to the competition.

“We keep it really simple in here,” says Ronnie. “A lot of the guys who come in are buying something they don’t know anything about. We don’t bombard them with phone calls or emails; we just offer education. They continue to explore and research, and most of those people we see back here.”

The Malkas are taking the long view. “We want to be like their grandparents’ jewelers with a state-of-the-art shop so we can create things that are going to last,” Ronnie says. “Like the 1920s-era jewelers you trusted but still current and evolving with time.” Although engagement and wedding rings dominate their business now, with as much as 85 percent of sales, they believe that as their original customers continue to mature, they’ll eventually diversify into jewelry for other occasions.

By the time the customer does make a purchase or put a deposit down on a custom ring, David and Ronnie have developed a relationship with them. They give their customers a Malka hat, pin or T-shirt. They also give them a pamphlet detailing the history of their three-generation tradition of diamond dealers, and paperwork that includes an appraisal. There’s no paperwork involved with the guarantee; that is automatic for the life of the ring.

As for that history, David’s father, Yossi Malka, who still has an office across the street from his son’s store, began his career as an apprentice under his great uncle in Israel, studied diamond cutting and later became a wholesale dealer in Portland.

David studied at the GIA, earned a graduate gemologist degree, and worked in a retail store for several years. David also ran his own jewelry appraisal lab, Independent Gemological Services, for the trade and private clients. “That’s a tough gig to be looking through the scope all day,” he says. “I was getting a little bit bored.”

Still, everyone thought he was crazy, he says, when he decided to open his own store. “It was the recession. It was a tough time.” Three major Portland jewelry stores had closed. “I figured if we took this plunge and we could stay afloat for two years, we should be able to weather anything,” he says. They’d been considering a variety of different names for the business when a friend offered this advice: “When you put your name on the door, you’re putting your name behind the business.”

Perfect. They had a name.

They leased a prime 1,000-square-foot spot within a vacant 10,000 square-foot space. It was bare bones, with not much beyond walls and floors.

“Welcome to the world of retail,” David says he remembered thinking. Traffic was thin at first, and David continued to operate the appraisal lab, taking it month by month. Although changing shopping habits of American consumers had seemed to be a bad omen, it turned out that Portland shoppers who did spend money on jewelry wanted to make sure they were investing in local, independent businesses. Within a couple of years, they’d won Oregon Bride Magazine’s “Best Rings of 2012” award.

In 2013 Malka became the official fine jewelers of the University of Oregon and their shop got very busy. Ronnie left her teaching job to join Malka full time after it became clear David needed help with marketing and events.

In 2018, they expanded the shop and fine-tuned their interior design, adding metallic cork wallpaper, a custom woven rug, a gathering area with a modern, round table and gray leather chairs, and custom-built display cases. The counter now boasts a marble top and black paint. Other additions include a gold light fixture and a trio of geometric mirrors. The look is upscale without feeling stuffy. The decor is also a personal reflection of what makes David and Ronnie comfortable, complete with a prominently displayed black and white wedding photo of the couple.

“Ninety-nine percent of the time, you meet a Malka,” Ronnie says. “We want them to know us as we want to know them.”

VIDEO: MALKA “ABOUT US” 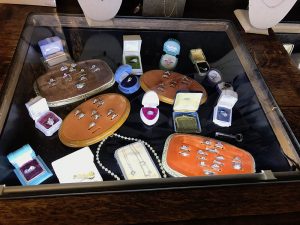 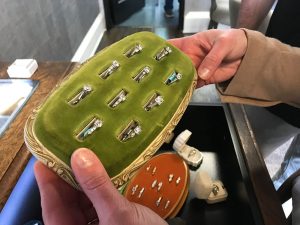 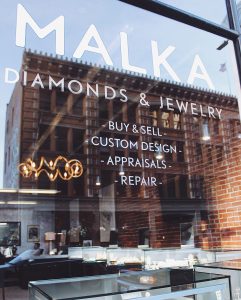 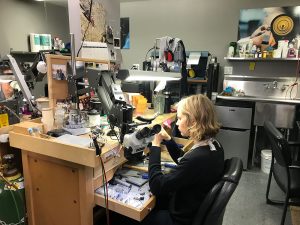 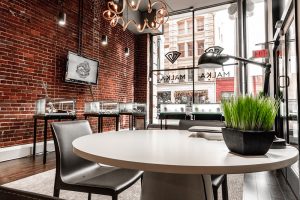 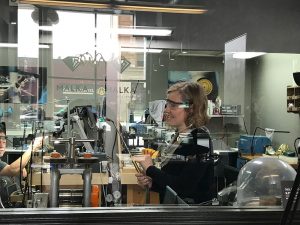 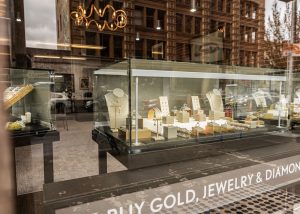 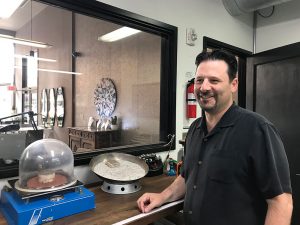 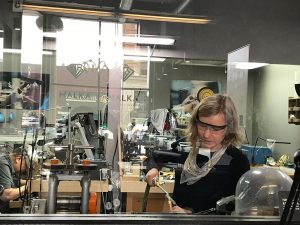 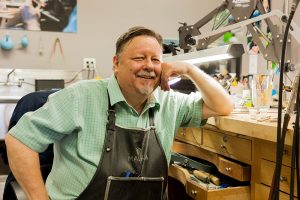 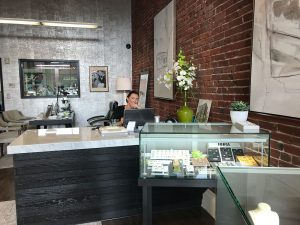 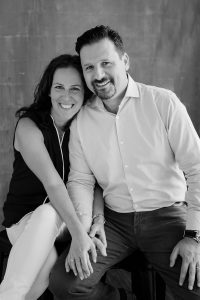 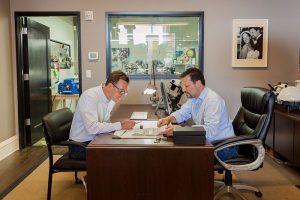 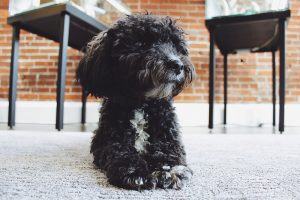 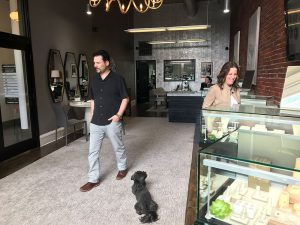 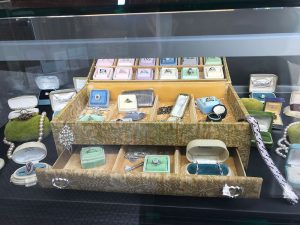 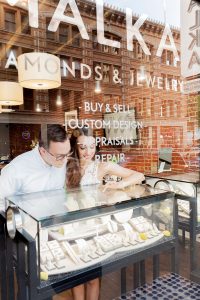 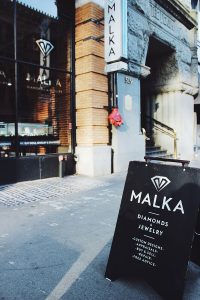 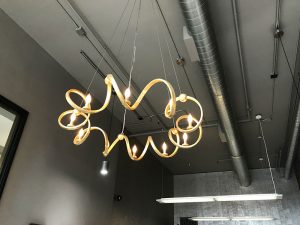 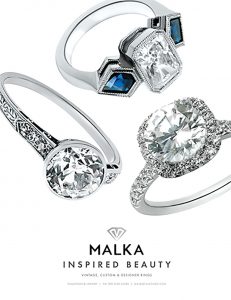 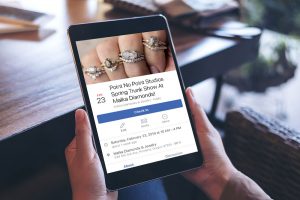 1. Salt-and-pepper diamonds. A year ago, Malka started showcasing the work of a Seattle designer, Point No Point Studios, which has a strong Instagram presence and specializes in salt-and-pepper diamond rings. “We knew that going out-of-the-box and trying something new would potentially bring new traffic,” says Ronnie, who gets several inquiries about them every week. David, as the son of a diamond dealer, admits he was reluctant at first to move in that direction. “My dad says, ‘How much is that per carat?!’ Ten years ago, it would have been used for drill bits, but now there’s an actual marketplace for it. I don’t think it’s a fad, either,” David says.

2. Collaborative environment. “We all know the projects, what’s going on, and what’s coming up,” Ronnie says. “It doesn’t feel compartmentalized.” That approach also creates opportunity for growth. Chloe, who works in the showroom, says Malka has the friendliest atmosphere of anywhere she has worked, as well as enormous growth potential and pride in values. “It gives me satisfaction learning-wise and experience-wise, knowing what the jewelers have to do to have a certain outcome for whatever kind of piece we’re making,” she says.

3. Custom connection. A 2018 expansion made room for two full-time master jewelers and more equipment in the shop. “We wanted everything done under our roof,” David says, from design to manufacture. Sometimes they are simply consultants: “An architect is doing his own CAD design for us to look at and make sure it’s going to translate into a ring and not a building,” Ronnie says.

4. Website curb appeal. Ronnie considers Malka’s digital presence, including its website, to be online curb appeal. “People want to engage online first,” Ronnie says. “Maybe 10 or 15 years ago, your website was a placeholder for your contact info, but now it tells your story.” People know what to expect.

5. Digital marketing ROI. Digital marketing has for the most part replaced traditional radio and TV, because as Ronnie says, “Our customer is online and if they’re seriously looking for a ring, they are seriously looking — not seeing it on TV. Many jewelers will say this is a waste of time, but in the last six months when our followers have doubled, we have noticed customers referring to an image they saw on Instagram or Facebook. It is a real relief to see the return on investment on the time spent taking photos and creating tag lines.” Even shop dog Toby has his own Instagram handle!

Related Topics: Featuredjewelry stores in Oregon
click to Comment(Comment)
Up Next