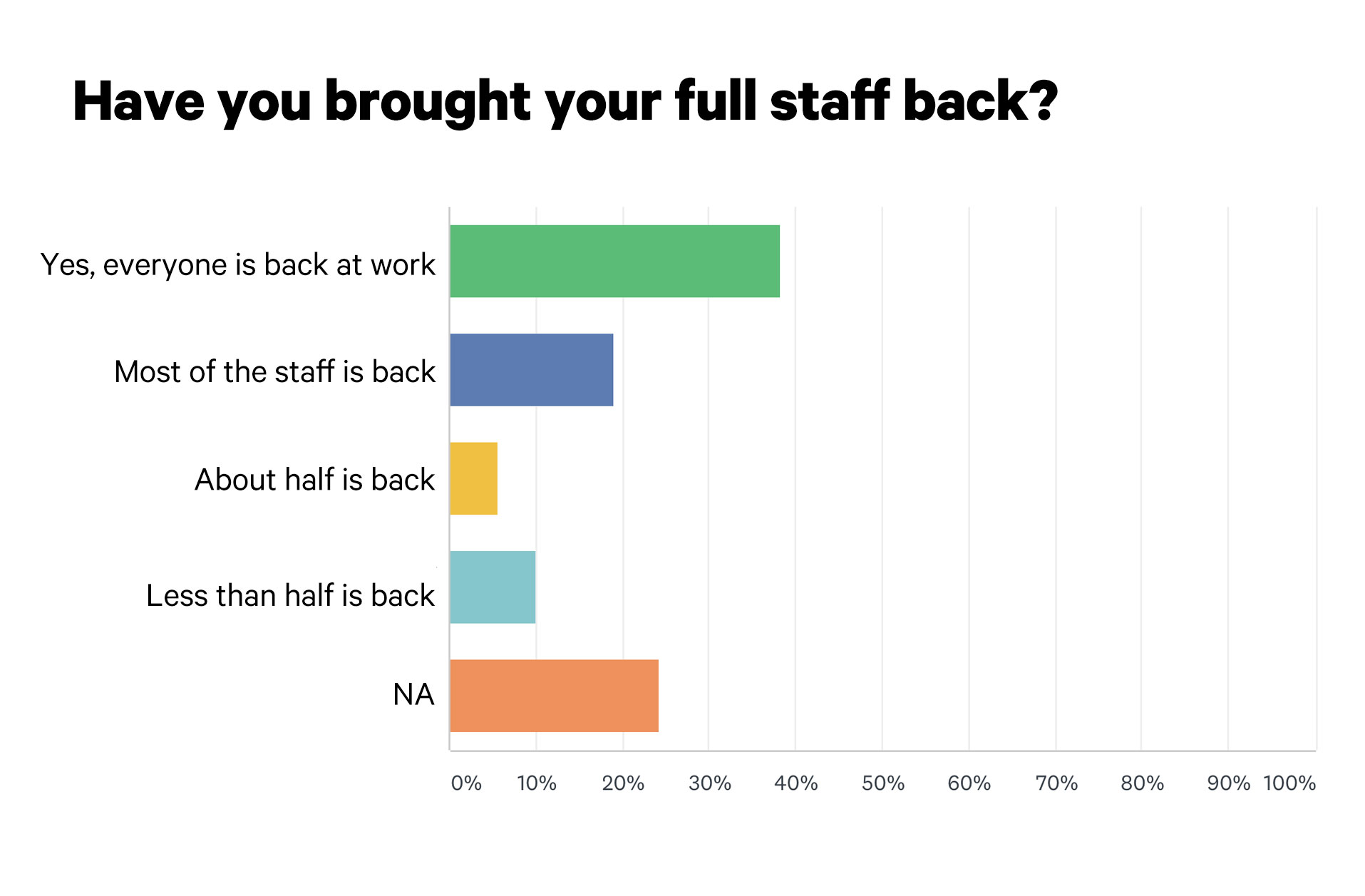 OF 228 BRAIN SQUAD members who responded to the survey question, “Have you brought your full staff back?” more than half of store owners and managers had brought back either most or all of their staff by last week. The survey was INSTORE’s third in a series of special COVID-19 response surveys; this one was launched on May 18.

Experiences that store owners recounted ran the gamut, from everyone still out on furlough to everyone paid throughout the crisis, much of the difference explained by regional variations in reopening rules. And sometimes being “back,” just means staff are being paid to stay home. “We received the loan, so now we are paying them to sit at home, rather than collect unemployment,” says Shari Altman of B&E Jewelers in Southampton, PA.

Dale Thompson of Bemidji, MN, says that Minnesota’s blanket shutdown has had an unfair effect on his business, since the virus has not made obvious inroads in the four-county area surrounding his city. “We have only six known infections. No deaths. The one-size approach that governors have largely employed during this time is a farce. Bigger cities and metropolitan areas are not northern Minnesota.” With that in mind, less than half of his staff is working, but he has been open for appointments, even though he’s officially been shut down. “If the virus begins to show its presence in a way that merits extra precautions, we will certainly implement them,” he says.

Others say they have found themselves in the position of competing for their employees’ return with enhanced unemployment benefits offered by the federal government.

In the case of Denise Oros of Linnea Jewelers of La Grange, IL, she had been paying her staff all along, through March and April from an emergency fund she had set up, before she got help from the federal Paycheck Protection Plan. “If there was a break in business, we wanted to be able to pay our employees and maintain our space,” she says. But one of her employees quit anyway and then applied for unemployment compensation, which would include an additional $600 a week in federal relief. When the employee declined a second time to return to work, Oros told her she would deny her unemployment claim. “She quit! And then she was livid with me. Go figure,” Oros says.

Yes, Everyone Is Back at Work

“I kept and paid my staff for the five weeks that we were in lockdown,” says Donnie Blanton of Brittany’s Fine Jewelry in Gainesville, FL. “I didn’t want any of them to feel forced to find work elsewhere and possibly expose themselves to the virus.”

Most of the Staff Is Back

“Our older staff member hasn’t felt comfortable coming back yet, so we still have one person out,” says Elysia Demers of Barnhardt Jewelers in Spencer, NC. “During the stay at home order, we got a letter of permission to stay open as long as we followed certain guidelines. Only two of us worked, only doing curbside pick-up, being very careful to sanitize and maintain 6 ft between us and customers.”

“Most of the staff is back,” says Jill Keith of Enchanted Jewelry in Danielson, CT. “In Connecticut, before we reopen, we must self-certify that we are complying with the published guidelines. We need more time to get those requirements in place, train, get our backlog caught up from the forced closure and monitor the virus as it’s just reached our location. We are going to stay virtual and curbside service by appointment for another month or two, so we can keep staff and customers healthy while monitoring the pandemic.”

“By “back” I mean we’re paying them through the PPPL instead of them collecting unemployment,” says Carol Wagen of Metal Art Studio Fine Jewelry in Grand Rapids, MI. “We’re staggering when we go in to limit contact and exposure to each other.”

“I have four part time staff that I cannot get back yet,” says John Hayes of Goodman’s Jewelers in Madison, WI. “My focus is on the full-time staff.”

Erika Godfrey of Hawthorne Jewelry in Kearney, NE, has been able to keep all full-time employees working, although part timers aren’t back yet. Although Godfrey never received a state mandate to shut down her store, her business effectively dropped at least 70 percent. “We have hopes to bring back at least two part-timers by the end of summer,” she says.

About Half Is Back

“We have about four staff members who aren’t comfortable coming back in Phase One,” says Jennifer Hornik Johnson of Miller’s Jewelry in Bozeman, MT.

Less Than Half Is Back

Eve J. Alfille of Eve J. Alfille Gallery and Studio in Evanston, IL, has been paying everyone’s full salary since closing on March 15, even though, as of last week, just one full-time and one part-time employee out of 12 were working in the store.

Staff Is Not Yet Back

“We are planning to reopen in phases,” says Betsy Barron of Love & Luxe in San Francisco. “Our staff is furloughed, and we will be open for virtual appointments and curbside pickup only through June.”