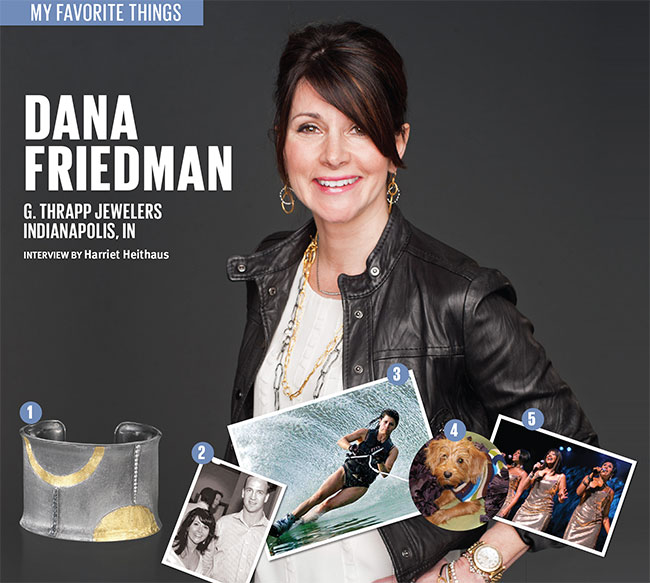 This article originally appeared in the March 2015 edition of INDESIGN.

1 THE “DANA” CUFF I’ve sold tons of stacked bracelets to customers who see the ones I wear. I wear one cuff bracelet on my right wrist that I have probably sold 40 times. Now I warn buyers that they may be seeing it on other people. John Apel, the designer, actually calls it the Dana cuff now. Even other people in our industry have purchased it.

2 PEYTON PIC I got married in 2010, and my husband had always warned me that if Butler University — where he graduated — got to the NCAA Final Four on the day of our wedding, we had to go. Of course, they did. And so we went. Just before the game, we went for one last drink at St. Elmo Steakhouse, which is close by. I still was in my wedding dress, and football quarterback Peyton Manning was there. So I got a picture of myself with Peyton Manning on my wedding day.

3 WATER-SKIING I’m a big water-skier. Growing up, I was in a water-ski club where we did ski shows and taught people how to water-ski. I’ve invited our clients’ kids out to learn how to water-ski or ski on the inner tube, and it’s been so much fun teaching them and watching them learn.

4 WINNING PUPPY I went with some clients to an event for which G. Thrapp had donated a piece. The top prize was a puppy, a mini-Labradoodle that was worth about $2,000. The client was going to bid on it to contribute to the charity, but he didn’t want to keep the dog and asked me if I wanted it if he won it. This is the cutest dog you’ve ever seen. Of course I wanted it. So when he won it, I got the puppy!

5 GET-UP SETUP I like a variety of music, just the way I like my jewelry. Hip hop, the Pointer sisters, whose Christmas album we put on every Christmas season, Michael Jackson, all kinds of things. I don’t always put on music for the store, but definitely at the beginning of each day, before we’re open, I do. It’s always something cardioworthy.