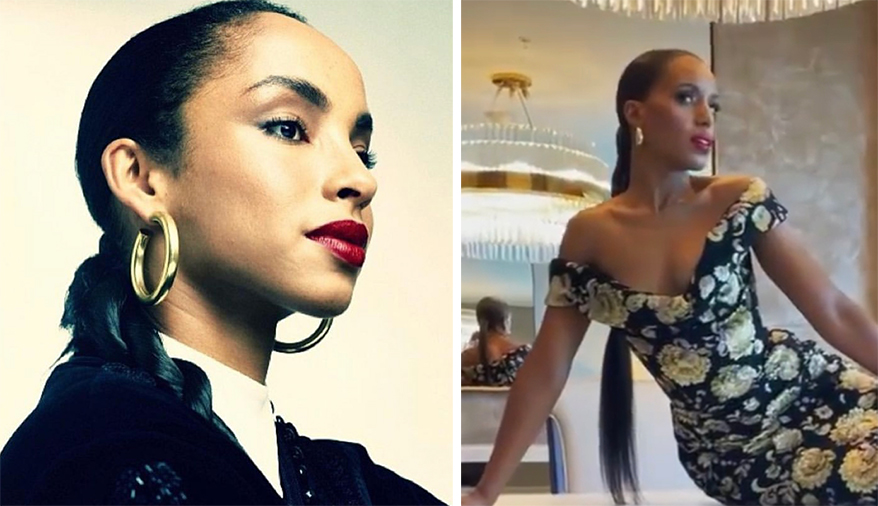 AS BRAND AMBASSADOR FOR Aurate and collaborator on the brand’s capsule collections, Kerry Washington knows how to model the jewels — and she does an excellent job of wearing them with her confident style while paying homage to such luminaries as Josephine Baker in a series of recent shots for Aurate. But the photo I personally like best is Washington’s channeling of Sade in a long ponytail and large yellow gold hoop earrings. Sade’s iconic style was all about minimalistic clothes: white shirts, denim, body skimming dresses and hair pulled back with large hoop earrings. Kerry’s look is a little more elegant in a floral gown, but the feeling comes through.

Hoop earrings have been around for centuries and in all cultures, civilizations and continents. From the first known Sumerian versions, hoops traveled to Africa, Asia, ancient Egypt, Rome and Greece, symbolizing everything from tribal identity to religious beliefs and a few other meanings that gave them a bad rep. But fast forward to the 20th century, and hoops have gone in and out of style every decade since the 1960s.

I was a young girl in that decade, and all I wanted was a pair of hoop earrings. I got my pair when my grandmother took me to see a man with an earring gun in a jewelry store and then bought me a pair of 18K gold twisted wire hoops that I would be allowed to wear six weeks after the piercing incident (which, by the way, almost caused me to faint when I saw the gun). I’ve had other piercings in my lobes since then, and hoops have always been in my rotation of jewels. Having long hair and a minimalist fashion style, I always wished I could look as chic as Sade with tight ponytail, but my ears are the size of Dumbo’s, so better to see the hoops peeking out from loosely flowing hair. Plus, I never had those spectacular facial features that both Sade and Kerry Washington possess.

But enough about me: Name any A-list actress or music performer from the ’60s onward, and you will have seen them in at least one pair of hoops—either in a film or in life. Think Sofia Loren, Natalie Wood, Ali McGraw, Diane Cannon, Sarah Jessica Parker, Julianne Moore, Jennifer Aniston, Nicole Kidman … the list could go on and on.

Interestingly over the past 15 years, hoops have not circled around and gone out and in style. They have stuck and evolved through different incarnations, from the shape (oval and pear-shaped versus round gypsy hoops) to those with gemstones and diamonds that glisten inside and outside the hoop, to sizes that go from the smallest of huggies to outsized, almost the diameter of bangle bracelets. But Kerry Washington isn’t alone—J.Lo, Rihanna and Beyonce all have worn large hoops with their hair in tight long ponytails and conjured up Sade’s legendary look.

Kerry, however, had me do a double take on Instagram in an Aurate post. See for yourself:  It’s a look I definitely would wear if I didn’t have such big ears.

9 Display Tips That Will Bring In More Holiday Sales