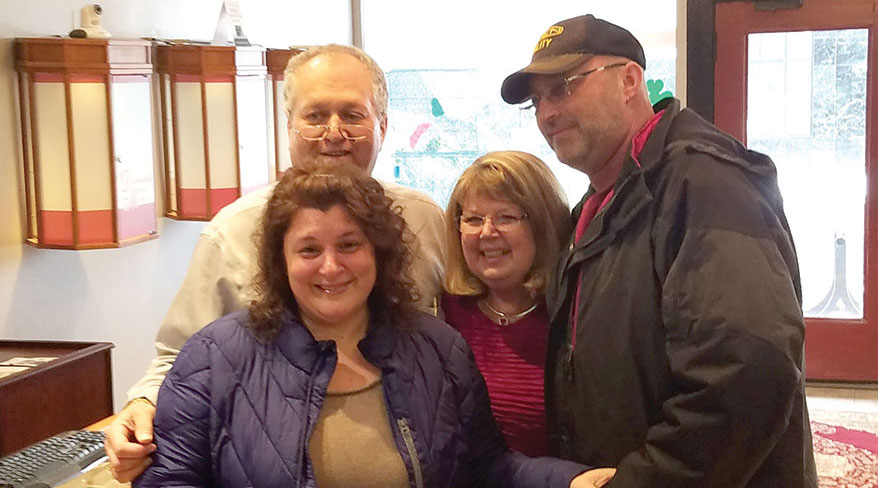 Ivan Rochon literally stumbled into the jewelry industry. Mopping the floor at a local bakery, he pushed the mop so hard against a wall that he knocked stuff off a shelf  in the jewelry store next door. He volunteered to do odd jobs to compensate for the damage and his career was born. “I took to jewelry like a duck to water,” Rochon says.

Seizing an Opportunity to Do Good

Now Ivan and his wife, Sally, own Diamonds and More in Rutland, VT, where they are known for helping out the community by hosting events for the United Way and contributing to a Christmas fund for kids. They also confess to being members of a secret club that makes anonymous gifts to locals with specific needs. They have discovered that radio advertising and marketing is a good fit for the personal way they like to do business. 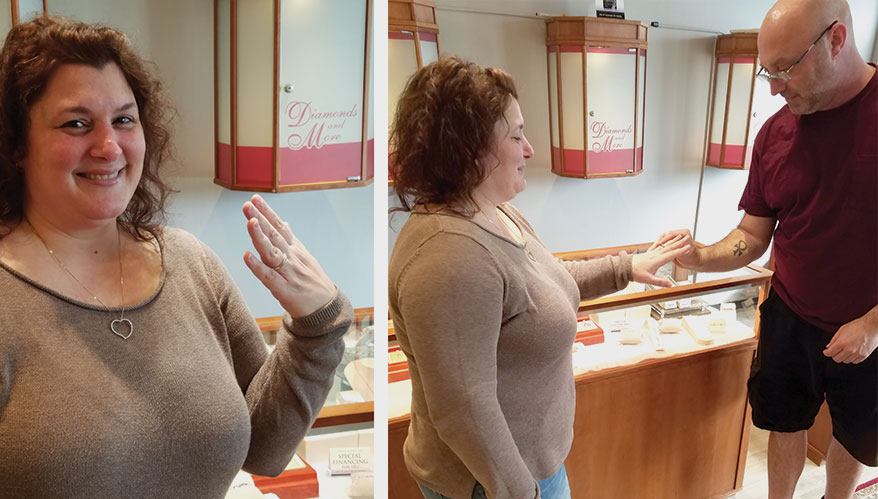 Anne Gianni-Euber receives her wedding band, a free gift from Diamonds and More.

They participated in a Valentine’s Day radio station giveaway in February, and winners Anne Gianni-Euber and her husband, David Euber, Jr., made a good first impression on the Rochons. The Rochons were touched by the couple’s reaction to the prize, a heart-shaped diamond pendant. “When we do contests, often someone wants to sell the prize back to us, or return it,” Rochon says. In contrast, this couple was thrilled to win it.

In fact, Anne told them, “This is wonderful. This is my only piece of jewelry, and I’m going to cherish it!”

They learned that a wedding band had seemed like an extravagance to the hardworking couple, who have four children and have been married six years.

So they called Anne, asking her to bring back her necklace because they had discovered the clasp was broken. She believed the ruse, and she and David returned with the necklace, although Anne confessed later she was worried she’d have to give back her prize.

“We separated them, and I handed David a princess-cut, half-carat, diamond-channel set wedding band, and I said, ‘Give this to your wife!’” Ivan says. “He looked puzzled, but we brought her back and sat her on a stool, pushed him in front of her and he gave her the ring and everybody in the room started crying. It was so cool. It was what we needed to do.”

Anne told the Rutland Herald newspaper reporter that she was speechless: “I’ve never had anything like this happen. I’m so humbled I can’t even tell you.”

Customers who read the story and saw the photos in the Rutland Herald told the Rochons what a nice thing it was to do. “We went out to lunch the other day, the waiter was staring at me, and he said, ‘You’re the guy in the paper!’” Ivan recalls. They’ve also received thousands of views on Facebook and hundreds of comments.

Do It Yourself: Using Radio to Provide a Personal Touch

Related Topics: Best of the BestcharityINSTORE May '17jewelry stores in VermontMarketing
click to Comment(Comment)
Up Next

Empower Your Purchasing: Custom Jeweler Shares How He Buys Diamonds

A Newly Hired Jeweler Leaves the Store Without Permission, Then Returns As If Nothing Has Happened

Video: 4 Conversations You Need to Have With Your Jewelry-Store Team