The Case of a
Little Lagniappe

IT WAS EARLY SEPTEMBER 2005, just a week or so after the devastation of Hurricane Katrina had shaken the New Orleans area to its core. The Ramsey family stood awestruck, trying to comprehend all that had happened — to their friends, to their neighbors, to their associates and customers, to their business.

They recognized that they were among the fortunate, having been spared the tragedy and destruction that was so common around them. Friends and loved ones were all accounted for, and damage to their home and business was far less than they expected. Yet as he listened to the news reports and talked with others, Robert Ramsey noted with dismay that discussion was about whether many of the displaced would return to New Orleans. Within his own professional circle, other jewelers were talking about the futility of even trying to reopen, noting that with so much hardship all around them, business would be essentially nonexistent for the rest of the year.

Natives of the Crescent City, Robert, his sister Lori and his wife Beth all knew the truth in the adage that those from New Orleans always manage to come back. They recognized that they were part of a great spirit — a community that had always believed in living life to the fullest and a people who would never bow to defeat. They knew the people of New Orleans would need Ramsey’s Diamond Jewelers more than ever — to help them feel better, to help them appreciate the beautiful things in life and to help them symbolize their most significant expressions of love and caring.

As they set about the task of repairing and reopening their store, the Ramseys began to think about how they could communicate their faith and commitment to their city and its people. They decided to create a pin — a simple Fleur de Lis design, traditionally the emblem of New Orleans — to give away as a symbol of pride in their community and its people.

After three weeks of round-the-clock work by staff, family, friends and contractors, Ramsey’s Diamond Jewelers reopened — and an amazing thing happened. The pins and their inspirational message, “N’Awlins Proud … Here today … Here tomorrow. Helping to create a brighter future” became a must-have item for locals, for visiting aid workers, and for displaced family and friends all over the United States.

More and more people came in specifically looking for the pins, and many insisted on paying for them. Robert and his team had never considered the idea as a money-maker, and tried to refuse payment. After losing many arguments with well-intentioned visitors, the store set up a special fund for Habitat for Humanity and local relief charities.

The Ramseys were so moved by the generosity that they decided to match the donations dollar for dollar. The store has so far donated more than $36,000 to local relief efforts. 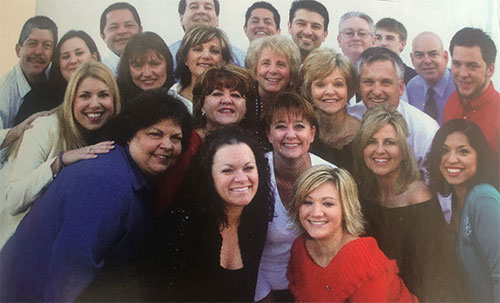 As a way of saying thanks and as a bit of relief, the Ramseys took their entire staff on a trip to New York following Katrina cleanup.

In the midst of crisis, the Ramseys also experienced the steel-willed character of their associates — many of whom had lost their homes and possessions or had been separated from family and friends.

The Ramseys decided they would treat their “extended family” to something special — something they would never consider doing for themselves under the circumstances. They announced that in January, the whole group — with guests — was heading for New York for a much-needed holiday. No goals to meet, no strings attached. The Ramsey contingent was 42 happy people strong when they brought their Southern charm to the Manhattan winter!

The 2005 holiday season stands as the record for the best in Ramsey’s history. Everyone in the store now has a real understanding of a simple fact: People really do need what we sell. They need to feel good and to express their deepest feelings and emotions. At Ramsey’s, the customers fed on the enthusiasm and excitement of the staff, and staff members drew their energy from the joy and gratitude of the customers.

With both the pins and the New York gift, the Ramsey family set out with no expectations, looking for no return and wanting only to do good. What they got, much to their amazement, is something the locals call “lagniappe”.

1. (USAGE: chiefly southern Louisiana and southeast Texas) a gift given by way of compliment or for good measure; bonus. 2. an unexpected or indirect benefit.

Related Topics: charityjewelry stores in Louisiana
click to Comment(Comment)
Up Next

Real Deal: The Case of the Diamond Debacle

GN Diamond Presents: How to Become a Diamond Superseller