The local fire department is demanding Steve Rodriguez surrender a key to his downtown jewelry store to meet city codes. Should he fight this government “intrusion” given the security concerns, or yield and comply?

This article originally appeared in the April 2015 edition of INSTORE. 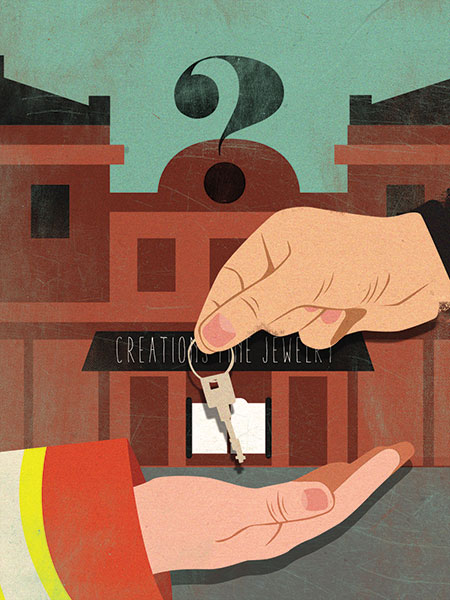 Creations Fine Jewelry is a new company — by the standards of an age-old industry, and by the standards of the 200 year-old Southeastern downtown area in which the store is located. When Steve Rodriguez moved his bench and tools into a small office and opened his trade shop 15 years ago, the start-up was comfortable and the business quickly profitable. When he moved from the office into a storefront in an old downtown building and expanded into a full-service fine jewelry store several years later, he couldn’t have anticipated the growth — or the growing pains ahead. Even today, running a $3 million store, there seems to be a new challenge around every corner.

Just last week, Steve had a visit from the chief of the local fire department. The chief was there to tell Steve that Creations was in violation of city code because he had not provided the fire department with a key to the store. When Steve objected, citing security concerns, the chief told him that keys to all businesses in the downtown district were kept in a station lockbox, and that only senior shift supervisors had access. He gave Steve 10 days to comply with his request.

Steve remembered the department requesting a key when he first moved into the building more than 10 years ago. He recalled talking to industry friends and other downtown merchants before refusing the request. He told the then chief that if there were ever a problem in the store, the fire department could just break down the door like they do in a private home. He hadn’t heard a word about it since.

Real Deal scenarios are inspired by true stories, but are changed to sharpen the dilemmas involved. The names of the characters and stores have been changed and should not be confused with real people or places.

Steve asked for and received a copy of the city code, and the regulation seemed pretty straightforward. He took some comfort in the fact that the regulation did not include a request for an alarm code — just a key — meaning that he would be notified of any entry. Still, with even a very short entry delay on the alarm, Steve couldn’t help but feel like he was compromising his store’s security. Despite the chief’s assurances, having a key to his business out of his hands seemed like a very bad idea. He could imagine a variety of scenarios that involved the key falling into the wrong hands and could easily envision a bad guy entering the store in the early morning or right after close when he was there alone.

With the new chief insisting on compliance and threatening everything from fines of up to $100 per day to further legal action including rescinding his occupancy permit, Steve once again sought the advice of industry friends and colleagues. A jeweler in a neighboring town suggested that Steve give up a key, then change his locks. The chief was very clear, however, about the department policy of random checks to ensure that all keys work, eliminating that as an effective option.

Other recommendations included installing a magnetic lock to protect against entry when the store was closed while someone was still inside, and creating a new policy that prohibited anyone — including Steve — from being in the store alone. Someone even suggested getting a big dog to live in the store during closed hours. Overall, the consensus among Steve’s friends was that he give the fire department a key, getting the matter settled quickly before he was hit with years of retroactive fines.

➤ What should Steve do? Should he simply give in and hope for the best, should he comply with the chief’s request while implementing secondary options (like a magnetic lock or a dog), or should he take up the fight on behalf of his own business and others, challenging government intrusion into the rights of business owners?

Never in a trillion faceted years should he consider having a key “out there.” Why would I ever risk everything I have worked so hard for? Never, never compromise your security this way. A locked key box at the station. Seriously? You might have your attorney ask the city’s risk assessment committee to consider the ramifications of a lawsuit if the key is used in a burglary. This would end it in our small town.

The first thing that comes to mind is not security but insurance and liability. I would contact my insurance company. If they didn’t have a problem I would comply.

So do you have an alarm system? Do you have cameras? Do you have insurance? If yes to all three then what are you really worried about? It’s not like you’re giving the meagerly paid rent-a-cop who watches the parking lot all night a key to the place. I would think you could trust the fire chief more than anybody and if there was any unforced entry and things went missing then you would have your suspect.

The local fire department should offer a Knox Box system to hold the key. This is a small safe that can be attached to the front of your building and wired into your alarm system. The fire department would have only one key that opens all the boxes in their coverage area. This has worked well in our town.

This is a standard operating procedure for fire departments all over the U.S. Firefighters are your allies and are not just there to put out fires. They respond to all 911 calls and they, not the police, are the first to the scene of a crime when someone is shot or hurt. Working in tandem with the fire department is imperative. The safety of your staff and customers and you are paramount.

Many years ago we had this same problem but with the town police; problem solved when an officer was caught using the key to steal from another jewelry store in town.

The problem with giving the fire department a key, and having them do random checks is that the checks will set off the alarm. Then the police will be called and the jeweler will eventually start getting fines from the police, or at the very least ignored in a real crisis.

Giving the fire department a key is ridiculous! First and foremost the fire department is tasked with saving life and property; if a fire were to occur after business hours they would be delayed trying to find the key. Fire trucks are often out of the station, and by the time they returned to pick up the key, the store would be totally engulfed in fire and the key would be irrelevant. I would call city hall. This ordinance should be changed.