TRISH ROBERSON’S VISION for her business is to build a fashion-forward, brand-conscious jewelry store known for service. She differentiates her brand — Roberson’s Fine Jewelry in Little Rock, AR — by carrying the work of designers who have beautiful and quality lines, but who tend to fly under the radar of her competitors. “I liken myself to Barney’s in how they try to find unique things, different but not so far out there that people can’t relate,” she says. And in the past two years, she has cut out three-quarters of her traditional advertising budget, focusing instead on events that appeal to her core customer: self-purchasing women.

Divide and Conquer the Trends

Inspired by posh trade-show events she had attended, Roberson decided to focus on a fall trend event for her customers, dividing the store into areas set up to showcase four trends: technology, light and airy, travel and darkly romantic. She also decided to try to replicate the polished treatment she receives when attending high-end industry events and pass along both knowledge and hospitality to her clients.

The special guests were already en route to Little Rock from New York and LA the Tuesday before the event when Roberson’s was invaded by armed robbers who terrorized the staff and shattered the store’s showcases. “We were all so emotionally damaged,” Roberson says. But rather than call it all off, Roberson and staff worked day and night to get the store ready and the showcases repaired, working around investigators and police, who were still on site when the red carpet rolled out on Thursday.

Clients were invited to ask questions about the trends, try on jewelry and, ultimately, purchase. They arrived at scheduled times and walked the red carpet outside the store, posed for photos, and later took photos of their jewelryadorned hands on the “JewelCam” — a mani-cam like the one seen on “E! Entertainment” during award shows.

Roberson divided her guest list and hosted eight groups of 25 to 35 women over two days. The groups were generally divided by age, and one group was offered for mothers and daughters.

Everyone who was invited was asked to call to make reservations and to bring guests. “We saw it as an opportunity to reach out to people who were not our customers,” Roberson says. “We pinpointed those customers that we know are really out there in the community and told them if you’d like to bring three, four or five people, just let us know.”

She hired a caterer, who planned the food around the themes (robot cookies, for example, in the technology trend area).

Roberson’s focus on creative events has worked for her business, which is doing better than it ever has, even though she has cut back drastically on advertising.

Planning unusual events has her customers and her city talking about her store. Word of mouth accolades have multiplied.

Another hugely popular event was flying half a dozen clients to New York to meet designer Gurhan on his home turf and explore the city in a whirlwind weekend. “It has really created a stir for us,” she says. 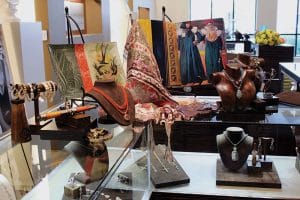 Although Roberson has streamlined print advertising from three regional magazines to one, the magazine she chose to work with now sweetens the deal by sending a photographer to her events and posting photos on Facebook and Instagram.

Do It Yourself: Go Beyond Trunk Shows

ORS Presents the Second in its Sales Management Series: The Fine Art of Managing a Sales Floor

$100,000 in Jewelry Stolen by Thieves with Sledgehammers in Yonkers, NY