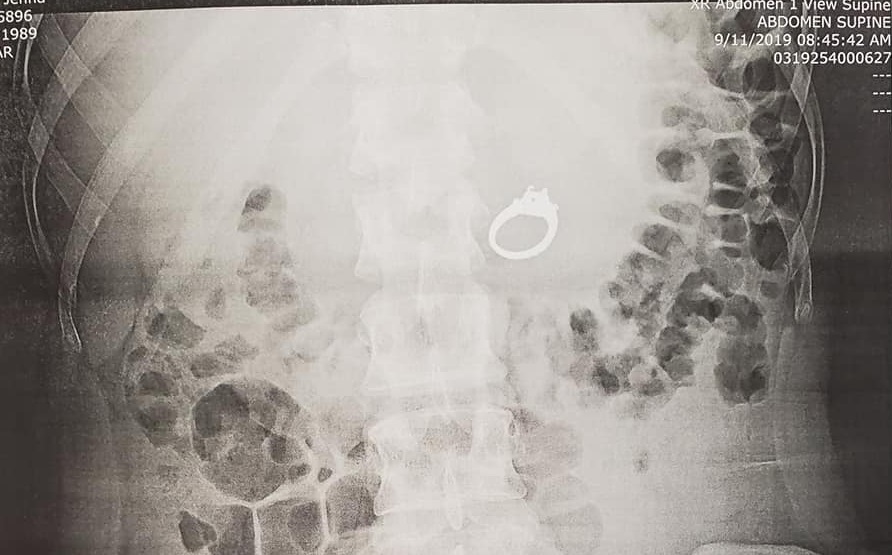 Jenna Evans swallowed her engagement ring in her sleep.

A San Diego woman woke up without her engagement ring, and she immediately remembered a dream she’d had the night before.

One where she’d swallowed her engagement ring.

Jenna Evans immediately told her fiance, Bob Howell, and they headed to urgent care. She told the story in a Facebook post that has gone viral, garnering 62,000 shares as of Sept. 16.

She ended up seeing a gastroenterologist, who performed an upper endoscopy.

“Everything went great, they found my ring just beyond my stomach in my intestines, retrieved it and gave it to Bobby, not me,” she wrote.

She also divulged a bit about the dream that got her into the predicament.

“I was having a dream that Bobby and I were in a very sketchy situation involving a high speed train and bad guys (I have very exciting and vivid dreams) and he told me I had to swallow my ring to protect it; so I popped that sucker off, put it in my mouth and swallowed it with a glass of water riiiight about the time I realized what I was doing,” she explained. “I assumed this too was a dream, because WHO ACTUALLY SWALLOWS THEIR ENGAGEMENT RING, so I went back to sleep.”

The ring was made by Simone Jewelry Designs in Houston. CBS8 reports that it includes a 2.4 carat diamond.

Watch a news video about the incident:

LVMH Cancels $16.2B Acquisition of Tiffany