KIM HATCHELL, SALES manager for Galloway and Moseley jewelry store in Sumter, SC, expected to be up to full staffing this week after reopening to the public last week, as permitted by the state of South Carolina.

South Carolina temporarily closed most businesses deemed “non-essential” by the end of March in light of the spread of COVID-19. 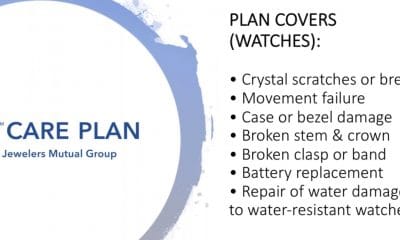 “The day we re-opened was good,” Hatchell says. “It was obvious we had been missed! We had a fairly steady day, mostly of our regulars who had been waiting.”

Because they have a large store in Sumter, SC, they could legally welcome in up to 30 customers at a time, which, she says, is unlikely to happen immediately.

“We’ve not had to enforce any distancing yet, simply because typically we’ve had one to three people at a time and they have all been very good at keeping that distance themselves,” she says. “People are cautious, and really, in a jewelry store environment, people do not tend to infringe on each other and ‘get in their business’ anyway. Our employees are aware, though, and would take steps to mitigate that happening.”

Before they reopened to the public, the team had been at the store every day anyway, behind locked doors, providing curbside service for customers with repairs and layaways to pick up, as well as maintaining a heavier presence on social media and upgrading their website to handle gift card sales.

“We never really ‘resumed’ business, we just adjusted, I guess you could say, based on need,” she says. “We actually had hung hand sanitizer machines at the front of the store before things were closed down, put small hand sanitizers at each work station, and have been disinfecting the store, all the contact points from the front door to the cases and point of sales, regularly throughout the day.

“We’ve made sure to educate all employees on safety and sanitation measures and are still offering curbside service or video appointments to customers that would prefer that.”

South Carolina does not require masks to be worn in stores to prevent the spread of COVID-19; none of the staff has worn them yet, although they are permitted to do so. About half of customers have worn them so far.

“We certainly take it seriously, and we take our business and our customers’ and employees’ safety seriously,” Hatchell says. “We had our 85th anniversary this month during the shutdown, and our community is strong and supportive of small local business, so we continue to hope for the best, for everyone to come through this and recover.”

Beth Skatell Owens, owner of Skatell’s Jewelers in Spartanburg, SC, reopened her store on April 21, the first day it was legally permitted by South Carolina to do so, but she had been meeting with clients for private appointments before that and staying in touch with them via Podium.

“Ever since we officially opened, we have been very busy,” Owens says. “Mostly diamond engagement clients. None of our clients are worried at all coming in face to face. Some wear a mask and some do not.”

Owens has kept her marketing program alive and even added a few billboards promoting engagement rings with the theme, “You can’t stop love.” She’s also launched a Facebook Live auction event, which she plans to continue weekly to clear out old merchandise and offer clients a deal.

Allison Love, despite having a pawn-broker business that would have allowed her to remain open, closed her store, Allison Love’s Fine Jewelry in Rock Hill, SC, on April 4. Although the store was busy at that time, Love, a member of the county council, wanted to lead by example. Still, she worked every day with her doors locked and managed to catch up on aspects of the business she suddenly had time for. When she reopened on April 23, for just a few hours, she found she was busy once again. Love’s plan is to be open with limited hours three days this week and perhaps for some weeks to come because a few employees are drawing unemployment benefits and are reluctant to return to work yet. “We are a large store and are allowed 10 to 15 people at a time based on square footage, but so far we have far fewer than that in a day.”

On March 30 the entire staff of Christopher’s Fine Jewelry of Pawley Island, SC, was furloughed. “During this time I had all calls transferred to my cell and worked by appointment only,” says owner Chris Cervini. “We made some sales, but unfortunately, for the most part it was extremely quiet.”

But by April 20, federal Paycheck Protection Program funding came through for Christopher’s. Cervini rehired the staff, then worked for four days to sanitize, organize and remerchandise the store in preparation for opening with normal business hours on April 27. Hand sanitizer and alcohol wipes at the ready, the store will also provide masks on request. “I have no clue how business will be this week, but I choose to remain optimistic,” Cervini says.

Related Topics: Featuredjewelry stores in South Carolina
click to Comment(Comment)
Up Next