A lot has happened since last year’s Oscars. Revelations and repercussions have reverberated through the industry as secrets came to light and tyrants fell. The upheaval even affected red carpet fashion, with actresses using the commodity they are the most frequently reduced to – appearance – to take a stand against abuse.

I’ve always known that the entertainment industry was full of talented women, but the #MeToo movement has taught me that it’s full of strong women, too. Some of them may look like pretty dolls, but they’re warrior queens.

The badass beauties of Hollywood brought their A-game to the Oscars. Amid the lovely, the elegant, the edgy and the interesting, I found myself gravitating toward another category: the strong. 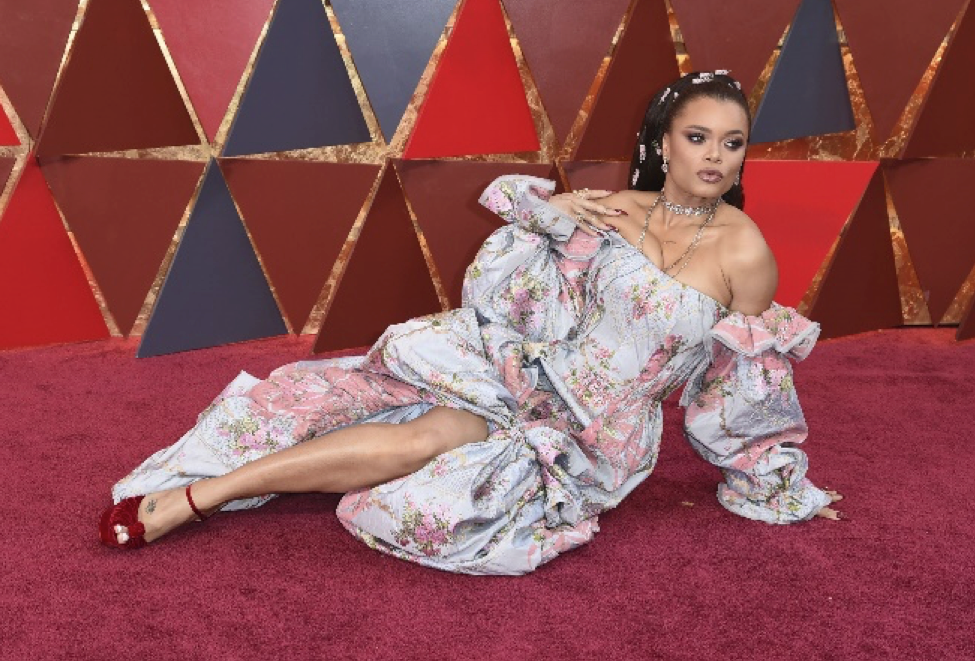 Look at the glorious Andra Day, lounging across the red carpet like Titania in her bower. She’s rocking a combo of Lorraine Schwartz and Ofira Jewels. This look is so unapologetically girly that it feels defiant: It says, “You can’t make me dress like a princess, but you also can’t stop me!” Those long scarlet nails and the dramatic draping of her layered necklaces – the choker caressing her throat while the two longer strands dip into her décolletage – clearly state that while her look may be playful, this Princess is not to be trifled with.

Later in the night, Day changed to an all-black outfit and bedecked herself with emeralds — luscious, sumptuous, verdant emeralds in luxuriant abundance. She became the evil queen to her own first look’s ingenue.

Haddish’s outfit isn’t just a look, it’s a tribute to her late father. She said on the red carpet that her father always knew she’d make it to the Oscars someday, and he asked her to honor their Eritrean heritage when she did. Not only is that heartwarming, it also displays incredible self-possession. There’s so much pressure on women in the public eye to present themselves a certain way, and it would be naive to pretend that it isn’t much harder for women of color.

I don’t know if the diadem, earrings, statement cuff and array large rings are also Eritrean (the internet failed me on this point), but they’re intriguing in their own right. They’re primarily gold, with some texture or granulation and stones in at least one of the rings. The entire effect is positively regal, and Haddish fully owned her own magnificence, even introducing herself to an interviewer as “the Princess of Eritrea.”

Lindsay Vonn’s dress isn’t my favorite. It has a “young widow who lost a fight with a lawnmower on her way to the saloon” vibe that I’m not into. (Fact: It was supposed to have long sleeves, but a wardrobe malfunction forced her to cut them off at the last minute.)

It would have been easy to go for simple diamonds with this elaborate gown, but instead Vonn’s look is accentuated by a staggering gold choker with a double row of substantial rubies ringed with diamonds. It’s vintage Bulgari, as are her ruby earrings and diamond bracelet. As if that weren’t enough, she’s also wearing a Rolex.

There’s something shocking and delightfully insouciant about that thick, ruby-studded gold choker and sizable watch against all of that delicate, shimmering black mesh and lace. Something about the combination reminds you that Vonn could be wearing a pile of Olympic medals if she so chose.

Salma Hayek’s Oscars look works on two levels for me. The first is, “Ooh, shiny!” Look at that gown, shimmering with orchid-colored sequins and festooned with silvery crystals. Even more impressively, she’s topped that with $4.2 million worth of Harry Winston platinum and diamond jewels: 27.5 cascading carats on her ears and an 11.66 carat diamond ring.

Salma Hayek has been a leader in the #MeToo movement; her personal history of Hollywood harassment appeared in The New York Times. She walked the Golden Globes red carpet in a dark, sedate, high-necked gown, a dramatic contrast to the actress’ usually elaborate style.

At the Oscars, she reclaimed her sartorial joie de vivre, glimmering in lilac and diamonds, as she stood beside her fellow activists on the stage and spoke before her peers and the world. She shared her story, even though it implicated a titan in her industry. She weathered that firestorm and now she’s moving forward (and doing it in nearly 40 carats of diamonds).

The entertainment industry still has quite a bit of work to do where feminism is concerned, but it was beautiful and inspiring to see so many talented women rocking confidence, strength and killer jewelry on the 2018 Oscars red carpet.

Related Topics: Becky StoneOscars
click to Comment(Comment)
Up Next

Oscar Night 2018: 20 Quips and Questions from a Regular Red-Carpet Tweeter

The Oscars-Inspired Jewelry Every Woman Should Own