FROM A WARM COLOR palette … to an aroma of homemade cookies baking in the back … to a permanent exhibit of four generations of family photos, Tivol is a store with a congenial vibe. At the same time, given its refined design, best-of-the-best watch and jewelry brands, and typically well-heeled, well-traveled and well-educated clientele, it’s also a store with a savvy fashion sensibility.

Creating a retail jewelry business that’s at once, sophisticated, yet down-to-earth — how do they do it?

Cathy Tivol, owner and CEO, puts it like this: “Since my grandfather, Charles Tivol, opened the first store in 1910, our philosophy has been to emphasize warmth and to know what’s in fashion in terms of value and good quality. That applies to every aspect of the business: store design and décor, customer service and amenities, sales, hiring, special events and promotion.”

Accordingly, two years ago, when they did a major remodel of the Overland Park, KS, store, it was that philosophy guiding the renovation. Well, that philosophy and general manager, Brian Butler — Tivol put him in charge of the Hawthorne Plaza shop’s transformation. Butler has a lot of experience in Tivol remodel projects, including the renovation of the flagship store in Kansas City, MO, some 25 miles from the Overland Park shop.

At the top of the list of Tivol’s design musts? Update the area so that it’s contemporary but still inviting; bring in as much natural light as possible; keep the cream/black/brown color scheme to maintain consistency with Tivol’s other location; add a lounge/TV area, and aim for as much space as possible, a necessity for expanded inventory and frequent in-store events. “We’d been there since 1994, when we had the store built for us, and we’d really outgrown our inventory and needed more selling space,” Tivol says.

Fortunately, they were able to utilize part of the adjacent space, which had recently become available. They hired architect Jake Schopp and immediately began cutting corners — though not in terms of dollars. Butler explains, “We eliminated the dead space — the four corners of the showroom that were being used as offices. We relocated all offices to the back, which also wound up giving us a lot more natural light because two of those offices had windows.”

Another primary goal was to replace the 20-year-old interior lighting.
“It was so poor that, if you wanted to sell a really good diamond, you had to bring a customer outside to show it to them!” Butler says. “We put Amerlux recessed fixtures in the ceilings, which have ceramic metal halide bulbs and lenses and reflectors that broadcast the light in a rectangle, which is really great for customers trying on jewelry.”

New showcases were also important but, in keeping with the thinking of her father, chairman emeritus Harold Tivol, Cathy Tivol ordered them sans in-case lighting. “My father has always thought it’s wrong to take out a piece from a lit case and then show it to a customer outside of the case because it changes the look so much. And truthfully, I like the look of cases that don’t have in-case lighting because I feel the lighting is distracting.”

At Tivol, the selling style is as welcoming as the ambience. Hunter Tivol McGrath, Cathy’s son, practices that firsthand. In 2011, he joined the firm as a sales associate, adding a fourth-generation to the family business.

McGrath is open and honest with customers. “I know that young guys usually aren’t comfortable in a jewelry store. So when I see them come in — and they’re obviously shopping for an engagement ring — I approach them on common ground, saying something like, ‘I know some of this stuff is expensive. It’s kind of unfair that we’re young and haven’t got much money.’ Being understanding of their situation always puts them more at ease and, ultimately, that selling style works best.”

It’s an affable, easygoing manner that’s reminiscent of Harold Tivol’s style. “Customers often talk with me about my grandfather, saying things like, ‘Harold Tivol is a character.’ I hear that word character a lot because he’s funny and easy to talk to.”

Very true, says designer Michael Bondanza, whose signature jewelry has been collected by Tivol customers for years. “Harold Tivol has an irresistible personality. Also a depth of knowledge that can’t be matched.” Calling the store “an institution” and the staff “special,” Bondanza notes that, “Cathy oversees everything with loving care.” And in his opinion, “It all comes from the top, Harold Tivol, whose love of the business and refined taste is why customers as well as other jewelers, like me, find a home there.” 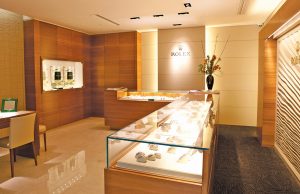 1. MORE ROOM FOR ROLEX. One priority in the renovation was to create a 500-square-foot corner area dedicated to showcasing Rolex timepieces. A floor-to-ceiling glass wall — a proprietary Rolex design — leads into the section. With the new Rolex space, Tivol can now display nearly twice as many luxury watches than they were able to prior to the remodel.

3. A WALK THROUGH ‘TIVOL TIME.’ Customers can view a photographic history of the 103-year-old retail jewelry store, displayed on a showroom wall. To reinforce the exhibit, there’s also a showcase with pieces from the original TIVOL Collection of jewelry and Tivol Heritage jewelry made by the store’s founder, Charles Tivol.

5. BERRY GOOD! Fruit-infused water is a delicious addition to the remodeled store. “We used to offer people bottled water, but now we put out a see-through container with a push-down lever on the showroom floor and fill it with clear water mixed with fresh fruit,” says Brian Butler, general manager. “It’s natural, healthy and refreshing, and customers seem to feel more comfortable helping themselves, instead of waiting for one of us to offer them a bottle of water.”

“Baking cookies in the store helps create a feeling of warmth and friendliness because people just love the smell! We have a small oven in the back of the shop where, on most weekends, one of our associates usually bakes some — and the aroma goes through the whole store. Some people ask for our recipe, too, so the cookies are good for conversation as well as another way to make customers feel welcome.” — Cathy Tivol, owner/CEO

“During our renovation, while all the construction was going on, we posted images on Facebook, to show clients the progress. It’s a good idea to keep customers interested and get them excited about how your store will look, whether you make small or big changes.” — Kelly Schottler, marketing coordinator and photographer

Related Topics: jewelry stores in KansasTivol
click to Comment(Comment)
Up Next

Organized Retail Crime Is Rising — How Lawmakers Are Fighting Back

How to Make Your Jewelry Store into a Bridal Destination