The steady erosion of margin over the last few years should prompt a thorough review of your data.

Our same-store comparison data showed a decline in June sales of 7.7 percent compared to June 2015 with average store sales for the month of $111,306 compared to $120,622 in the year-earlier period. Following last month’s drop of 5.8 percent compared to May 2015 this represents the first time sales figures have declined for two successive months since 2014.

Units sold continued their declining path, which is now in its seventh straight month, and we have not seen an increase in sales volume on a year-on-year basis since November 2015. Units sold per average store for June of 338 items was well down on the June 2015 figure of 410, a drop of 17.5 percent. Average retail value sold, however, has continued to offset this with an average retail achieved for June of $299, up from $269 in June of 2015.

The drop in margin is a continuing concern for most jewelry-store owners. As the graphs below show, the impact of declining margins has been felt for some time.

The data above shows a period from 2011/2012 when the average margin being achieved across stores was within the range of 49-52 percent per month. Jump forward to 2015/16 and the graph tells a different story. 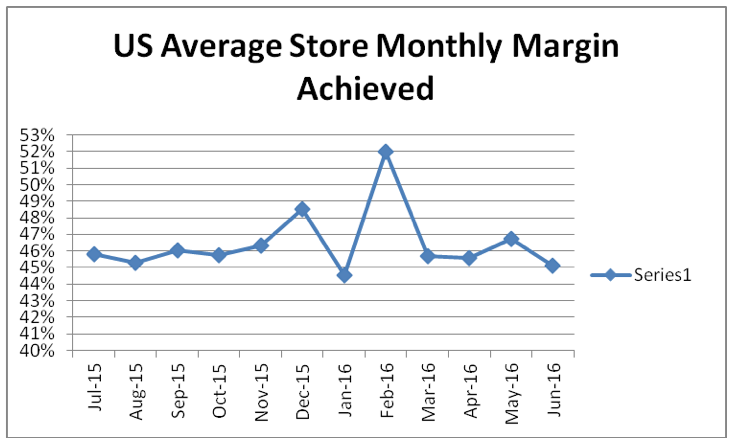 With the exception of a very good month for February 2016 the margin being achieved by jewelers is well down on from five years earlier; removing February leaves every month’s margin below the low point recorded back in 2012. With margins declining by 3 to 4 points the impact can be significant. A store achieving the annual average sales of $1.6 million would expect a gross profit of $784,000 at 49 percent. By comparison, a margin of 45 percent would see a gross profit achieved of $720,000.That’s a significant difference of $64,000 which not only comes off your gross profit but straight off your bottom line.

To put it into perspective here are some examples for a store doing $1.6 million:

Or on a more personal note:

When you put $64,000 into perspective it focuses you on thinking about just how much you are giving away. If your margin has declined by 4 points and your sales revenue is higher than $1.6 million per year then the impact is even greater.

If your decline in margin is part of a conscious choice or business strategy that is fine. Unfortunately for many businesses it is simply a side-effect of other activities and often goes unnoticed. We’ve spoken before about the lower margin of big-ticket items and if your average sale is increasing then it might be understandable to see a slight drop in margin. It pays to check if this is the case. A quick review of the margins you are achieving on lower-priced items such as silver jewelry will help show whether it is a decline in the sales mix or a drop in what’s being achieved on items you used to get a better profit for.

Take the time to investigate your margin strategy. It is too important to your business to be left to chance.

David Brown is president of the Edge Retail Academy, an organization devoted to the measurement and growth of jewelry store performance and profitability. For further information about the Academy’s management mentoring and industry benchmarking reports, contact [email protected] or phone toll free (877) 569-8657

This article is an online extra for INSTORE Online.