Managing is about getting the best out of your inventory, your local situation and — most difficult — your staff. Here, owners and managers tell us how they do it.

50. How would you characterize your leadership style?

51. In what area have you improved the most as a manager?

52. For you, what is the most important channel for staying on top of industry news?

53. Owners and employees often have different views on what is expected in the workplace. That clash of perspectives often makes for interesting, humorous or just plain outlandish incidents. Here we offer you Staff True Tales. (Also to be a new column in the magazine in 2020.)

54. In recent years, is there anything that you studied deeply and decided wasn’t worth pursuing?

In-house CAD/CAM capabilities were the overwhelming winner here, as many jewelers studied it but decided that outsourcing was a better option for them. Interestingly, e-commerce was next-most mentioned (tied with “new lines of product”). Most experts and top jewelry stores have concluded that e-commerce is a must-have for selling to today’s consumer, who likes to shop via mobile device.

55. What is the average tenure of your staff? 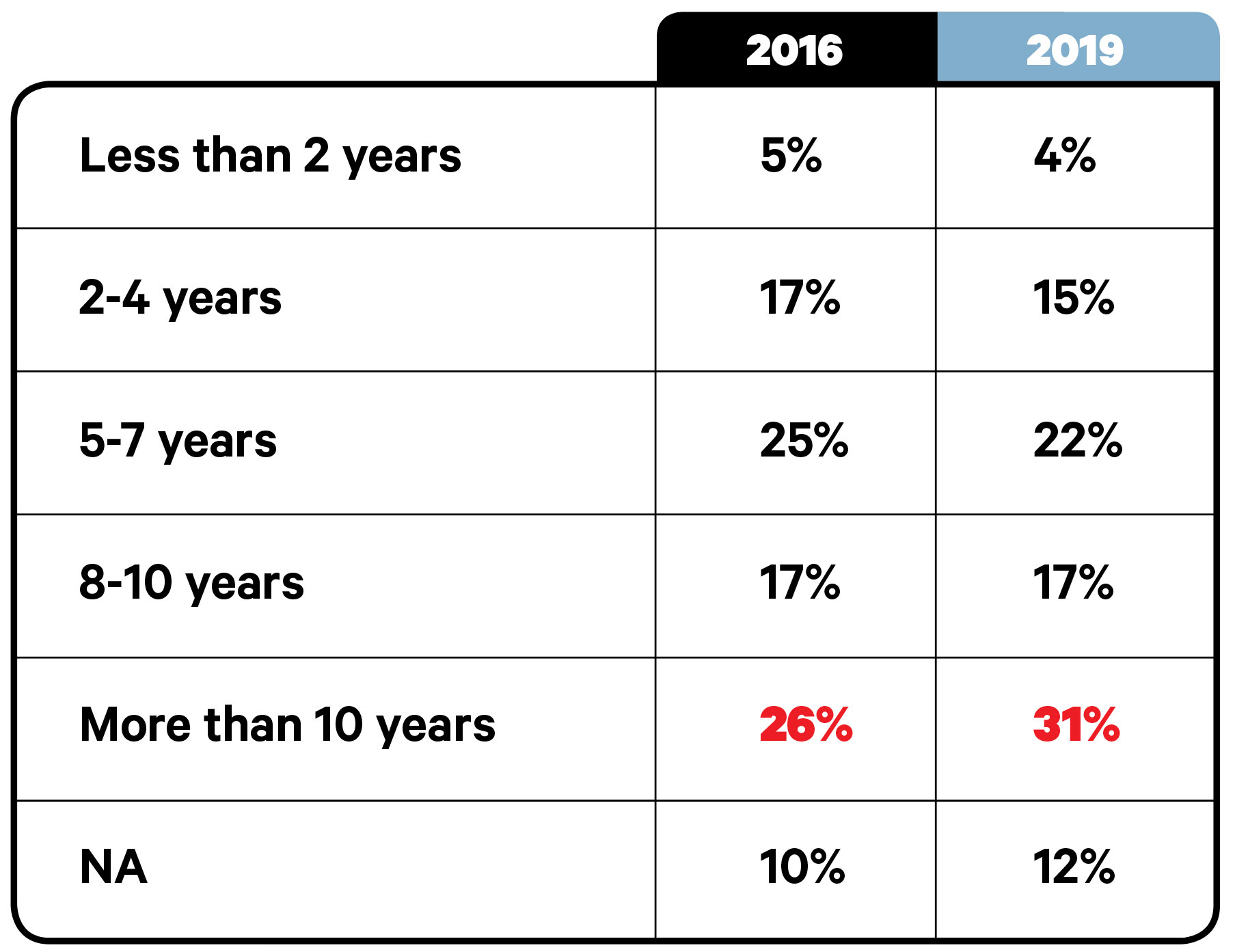 COMMENT: Elsewhere in the labor market, people may be changing jobs regularly, but jewelry-store staff seem pretty content to hang in there. The portion of stores where the staff had been on the books for an average of more than 10 years rose in the last three years from about one in four to almost one in three in 2019.
Advertisement

56. What is the most epic way you’ve seen someone quit or be fired?

Dealing with employees, especially on their way out, can be problematic. Sometimes they can even culminate in award-winning dramatic performances. Read on for the most memorable ways employees have left jewelry stores.

A change of heart.

You’ve made me ill.

A change in status.

And the award for best farewell performance goes to the staff who:

9. Showed up in pajamas, had a breakdown, quit and walked out.

8. Threw rings at the boss while asking for a raise, then quit.

7. Threw a crystal piece through a showcase shelf.

6. Hit the jeweler in the head with a bag of bananas.

4. Came in wielding a pipe wrench screaming that we were liars.

2. Got drunk at a charity event we were sponsoring, hit on one of the ladies and pulled her skirt up. Police were called.

And the No. 1 best dramatic performance goes to:

The employee who hired a marching band to quit.

57. What things are red flags on a resume?

COMMENT: Among the “Others” that stood out were “Desired income of 30k” for a part-time job; “Asks where we are located”, misspells store name, types in the cover letter “excited about (not the position advertised)”; or handwritten resumes — “especially if it’s in pencil.”

58. What do you think your staff dread the most?

COMMENT: There were some positive things listed among “Others” such as “Losing a sale to a competitor” but these were greatly outweighed by answers that hinted at an underlying misalignment between staff and management’s views on work. According to these bosses, staff dreaded: “Having me come in the store”, “Customers … I know, that is not a good sign”; “Having to learn anything new,” and “Keeping busy.”
Advertisement

59. Dark Arts of Jewelry Retail: Tell us a sales strategy or technique that would be in the quiver of a streetwise jeweler (but which perhaps isn’t something they’d want their clients to know about).

Our question prompted one survey-taker to reply “I suddenly feel like an innocent rube. Say whaaaaa?” But to succeed in just about any human endeavor, from sports to politics to business, it requires at least a knowledge of the not-so-high road, even if you don’t take it yourself. We broke the Dark Arts into 10 categories:

What I Learned From Harry Friedman About Sales Meetings

Here’s How To Handle That Price Objection