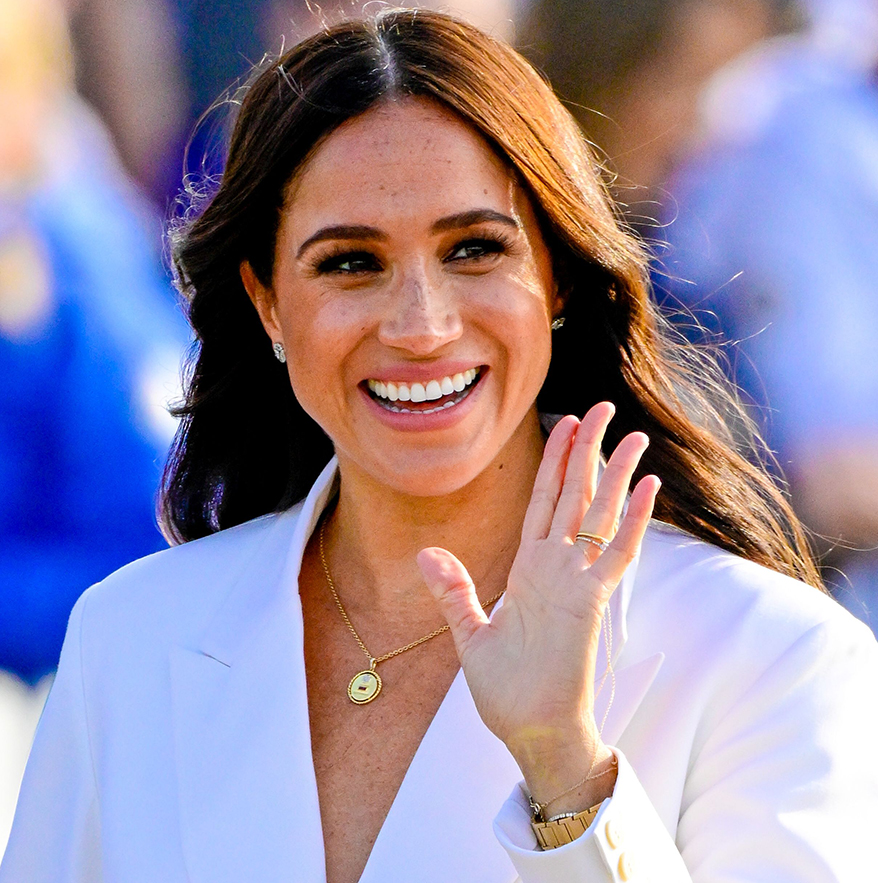 THERE HAS been much hype around the Sophie Lis “Love Pendant” that Meghan Markle wore to the Invictus Games, which she was first spotted wearing around her neck in March 2020 during a trip to London’s National Theatre to raise funds for the Wild at Heart Foundation, a global dog rescue. Lis donated $12,000 of the proceeds after selling out of hundreds of the pendant after the Duchess was seen in it back then. Markle was photographed in it again at another event, yet it wasn’t until the recent trip to the Invictus Games that the pendant was widely publicized. There is a lot of history behind the “Love Pendant” that Notting Hill-based Lis has translated into 22K vermeil (gold plated silver) with a diamond halo. It is inspired by a famous pendant and a legendary poem.

To discuss the version that Markle wore, we need to go back to the design of the original pendant, which dates to 1907 and is a rebus, meaning a puzzle with words or letters and motifs that create the meaning of an ornamental piece. In this case, “Qu’heir” beneath a diamond plus sign is followed by a ruby diamond minus sign and “Que Demain.” The Lis interpretation incorporates the same with a modern polish to the design.

In English, the diamond plus sign translates into “more” and the inscription reads “than today” while the ruby minus sign signifies less, with the words “than tomorrow.” This quote is taken from a much longer 1890 work by French poet Rosemonde Gérard entitled (in English) “The Eternal Song.” She wrote it for her husband, Edmond Rostand, who penned Cyrano de Bergerac. The stanza from which this part of the poem is translated reads: “Vois-tu, chaque jour je t’aime davantage /Aujourd’hui plus qu’hier et bien moins que demain.” In English, it means: “You see, every day I love you more today, more than yesterday and much less than tomorrow.”

A little history: The original pendant was created in 1907 by Lyonias designer Alphonse Augis, who was inspired by the Gérard poem and created what was called the the “Medaille d’Amour,” which transformed the entire verse into the symbols + Qu’heir (than yesterday) and – Que Demain (than tomorrow). You will traditionally see the plus sign with diamonds and the minus sign with rubies. However, the house of Augis, founded in 1830, continued to create the iconic “love medals” for years to come and innovated variations such as braided texture, polished or gemstone surrounds, heart shaped medallions, rectangular forms and a host of other designs. I have three: one with a woven braided texture, one that is an Art Nouveau design with a pansy in the center, and one that has more of the original verse on the front (all pictured). Two of mine are signed A. Augis, as was the case with many of the pendants. They were supposedly produced well into the 20th century. And it seems that during the Art Deco period, the pendant inspired a few renowned houses to create customized versions, but they are few and far between.

The “Love Pendant” that the Duchess wears is on the Sophie Lis website, where it is described as “a symbol of ever-growing love.” For those who prefer modern designed pieces that are affordable, give a nod to the past and continue to support the Wild at Heart Foundation, this is an accessible alternative to the antique/vintage pendants. (That said, on the website it is listed as “available on pre order,” with delivery in six weeks.)

By wearing this pendant on several occasions, Markle has helped with a charitable cause that is dear to her heart. It is also the type of sentimental or symbolic jewelry to which the Duchess seems to be drawn.

For those who don’t know the poem in its entirety, I posted it twice on Instagram in its English translation with different variations of the Augis pendant because it is a truly beautiful, romantic and intimately emotional poem.

Here it is for anyone who wants to read it:

Advertisement
Related Topics: celebrity jewelryFeatured
click to Comment(Comment)
Up Next