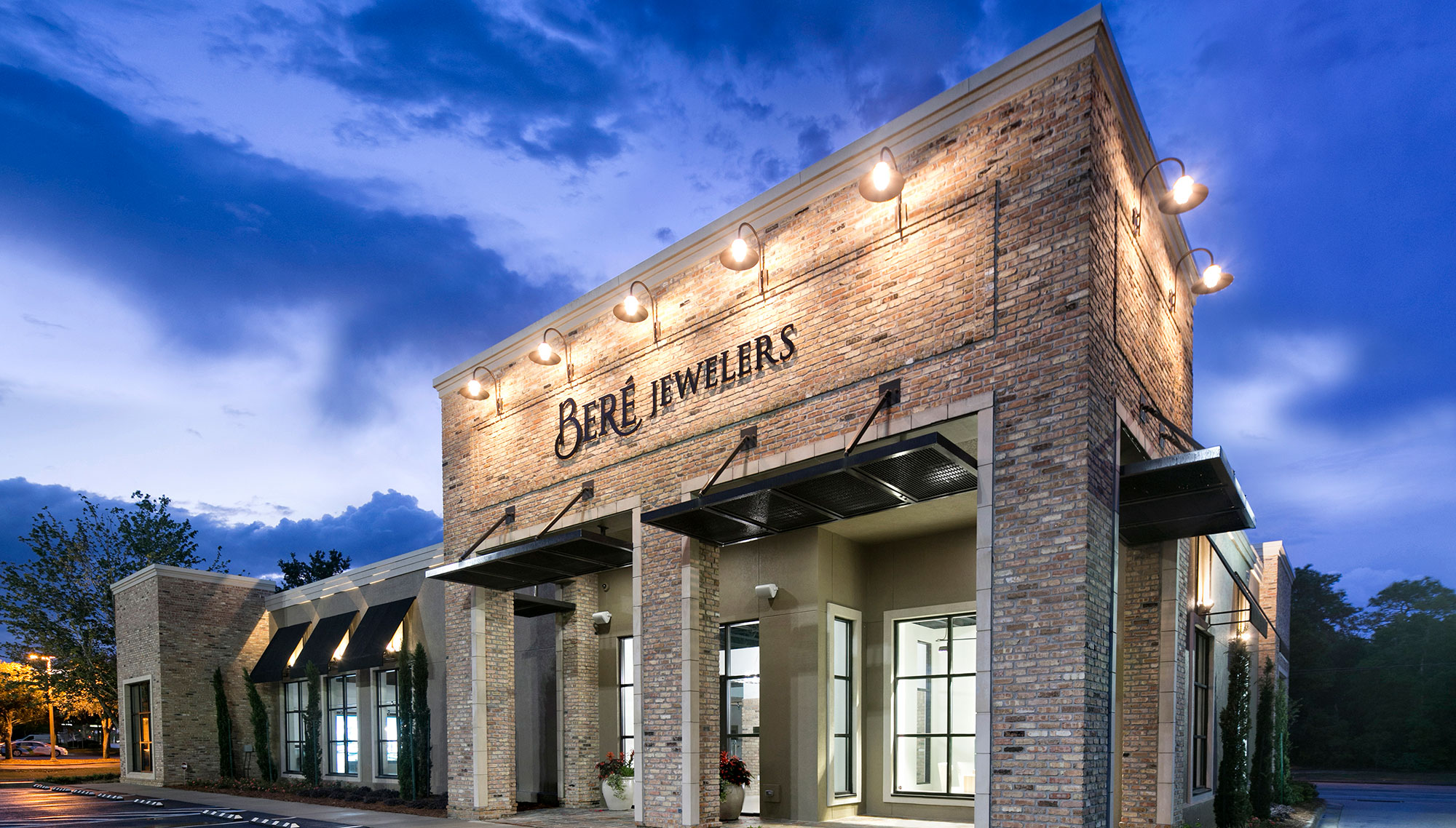 A ROUTINE DRIVE HOME from the airport changed everything for Barry and Laura Cole. After a buying trip to Las Vegas in June 2016, the couple passed a furniture store they had long imagined would be the ideal spot for a jewelry store. In fact, for years, they had peeked in the windows and dreamed about its potential transformation. This time, they did a double take when they noticed a for-sale sign. “Our wheels started spinning,” Barry says. Despite years of daydreaming, they never really believed they’d be starting over after 31 years in business, but they wanted to set up the business for its best possible future for their second generation, sons Conner and Harrison. Conner won the Atlanta 24 Karat Club’s Robert Foreman Memorial Scholarship in August 2018 and has earned a graduate gemologist degree.

Bankers were called, and construction began about four months later under the guidance of store designer Jesse Balaity. It was to be a remarkably quick turnaround with the opening in April 2017.

“Jesse is a little more contemporary and I am a little more traditional,” Barry Cole says. “But I’m a pretty laid back guy, and we wanted it to have a less traditional feel to it than most stores. I didn’t want dark cherry wood or drop cloud lighting systems. I just wanted it to be different.”

Balaity was happy to deliver that distinctive look.

The building was in great shape, he says — a well-designed furniture store with a wide-open canvas inside and an exposed ceiling.

“It lent itself to having a more contemporary feeling,” Balaity says. “I often advise clients working with a big open ceiling not to pursue a traditional approach. Dark woods and lower ceilings don’t work with a big volume of space. If they do want to finish out everything with wood veneers and moldings, it gets uncontrollably expensive to deal with all those finishings.”

So, finding themselves in agreement, the Coles and Balaity kept the industrial-style open ceilings and added old reclaimed Chicago brick from local sites to build columns and walls.

Another important consideration was to determine which generation (or generations) the Coles were trying to woo as clients. “Pensacola has a good mix because of the Air Force base,” Balaity says. “And we want to be able to broadly attract younger bridal customers and older customers alike into this space. Having a contemporary approach was more approachable for everyone.”

To balance the jewelry and watch brand identities with the Beré identity, each was given its own distinct zone, created by a mix of wood plank and porcelain. The Breitling enclave is defined by wood plank and the Forevermark zone is highlighted with a similar material in a lighter color. “We had to pick and choose how each would have its presence and how they would play together, and we found ways to overlap Forevermark and the bridal zone,” Balaity says.

The store is across the street from the airport, says Cole, who can sit in his conference room and look at the runway. The city is known for being the home of naval aviation and the Blue Angels, local themes Cole wanted to tie into the store.

An 18-foot granite community table is the center for meetings and events and invites customers to relax with a hot cup of coffee or cold beer. The Coles offer their space to local charities for events and board meetings, too. Original artwork by Laura Cole hangs throughout the store.

Barry believes the design achieved all of his goals, even goals he didn’t realize he had and wouldn’t have been able to articulate without Balaity’s input. “On front-facing showcases, the drawer pulls are made out of leather,” he says. “Just little details like that that I never in a million years would have thought of. Showcases all of a sudden looked like an old trunk. I’m good at what I do, but I never would have thought of those things.”

Balaity says the store is an extension of its owners’ personalities. “Barry and Laura are community-engaged and affable, and they grasped the idea of the store being a community hub,” he says. “They took a big leap to create a full bar area, an outside seating area and a lounge area. When you walk in and see Barry in this environment, it looks like you’re seeing him in this large living room. It really is the owner’s personality that melds with the design and makes it a retail experience.”

Cole agrees it can feel like his living room and that the hospitable atmosphere is good for business. “We will sit here at night and open a beer and really enjoy being here,” he says. “It’s pretty cool when you feel you don’t have to be away from this place. Every single day someone comes in and is wowed.” In fact, during the first six months the store was open, the Coles welcomed 3,000 new customers. In the first fiscal year, revenues were 50 percent over the previous year, even though the previous year had included a Wilkerson sale event.

Barry Cole’s origins in jewelry can be traced to a high school job at Zales. “I loved working with people and selling diamonds and watches,” he says. During his senior year in college, Ray Jones, his former boss at Zales, suggested they open their own store. “I was 21 years old, I was living at home, going to school. We spent the better part of that year, late 1984, saving up money. We each saved $10,000, and we found a bank to loan us $25,000.” They rented a 700 square-foot store, had some cases made, secured some inventory on memo and chose a name, a simple combination of their names. “Goofy, but it worked!” Cole says. “We opened on Oct. 15, and on Dec. 31, we had an armed robbery and we lost everything.” Although they were insured, much of the inventory was on memo and it took nine months to start over. In June 2005, after Jones died suddenly, Cole relocated the Pensacola store closer to the heartbeat of the Pensacola shopping area.

The Coles have come a long way and aren’t afraid to evolve.

“Don’t be afraid of change,” Cole says. “I’m a big college football fan and I follow the University of Alabama. (Coach) Nick Saban is willing to change, to hire the right people who know the things to do to change with the times. That’s what I aspire to.”

1. The Golden Ticket. The Coles created a VIP event with a “golden ticket” inspired by Willy Wonka And The Chocolate Factory. VIP customers are offered a Golden Ticket invitation with a discount good for one night only. The evening features a full bar, catering from Pensacola’s best restaurants and live music.

2. The Blue Angels. Beré teams up with Breitling to sponsor the Blue Angels air show in Pensacola. “There will be about a quarter million people attending, and they blast our name over the intercom system,” Cole says. “We’ll end up selling between 10 and 25 watches as a result of that show.”

3. Embracing watches. The Coles are building a new watch shop on site. “I have a big passion for watches,” Cole says. “As much as a lot of jewelers are getting out of watches, I’ve kind of embraced watches because it gets people in our store. Guys come in and look at Omega, Breitling, Tag Heuer, Shinola, Oris, and that gets them exposed to our brand and our store.”

4. Marketing strategy. The Coles built a strong Facebook presence with 125,000 followers. After contracting with an agency, they began using geo-fencing and got into Instagram. They’re on network TV every day and advertise on seven or eight billboards. They’ve also got an ad on the back cover of several local magazines. “We’re the most aggressive advertiser in our market. It’s a transient community and I’ve got to let people know we are here.”

5. Community presence. “We’re big into charities and events around town,” Cole says. “We do a lot of sponsoring of ball teams and schools. When you support these things, the parents will support you.” During construction, they also made a concerted effort to use the community as a resource, going to local furniture and lighting stores and working with people they knew, even though at times they paid a premium to do so, Balaity says.

Related Topics: Beré Jewelersjewelry stores in Florida
click to Comment(Comment)
Up Next