The prolific Letšeng mine in the tiny southern Africa kingdom of Lesotho has produced another mammoth gem-quality diamond. Weighing 910 carats, the D-color, Type IIa stone is the largest ever mined at Letšeng and the fifth-largest gem-quality diamond ever recovered. 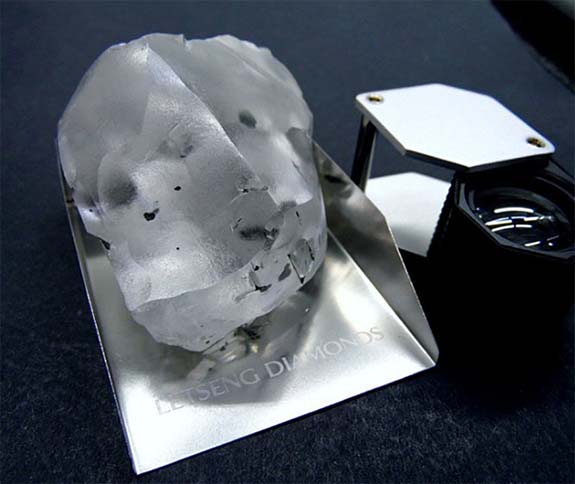 This stone is the fifth-largest gem-quality diamond ever recovered. Credit: Image via Twitter.com/GemDiamondsLtd.

The yet-to-be-named gem is probably worth more than $50 million based on recent sales of colossal diamonds exhibiting nearly identical characteristics.

For example, the 1,109-carat Lesedi La Rona (#2 on the all-time list) was sold in September of 2017 for $53 million. In May of 2016, the 812-carat Constellation (#7 on the all-time list) fetched $63 million. Sourced at Lucara’s Karowe mine in Botswana, both D-color diamonds were rated Type IIa, which means they are chemically pure with no traces of nitrogen or boron impurities.

Despite having a land mass slightly smaller than Maryland, Lesotho is an international powerhouse when it comes to turning out huge, top-quality stones.

“Since Gem Diamonds acquired Letšeng in 2006, the mine has produced some of the world’s most remarkable diamonds, including the 603-carat Lesotho Promise,” noted Gem Diamonds CEO Clifford Elphick. “However, this exceptional top-quality diamond is the largest to be mined to date and highlights the unsurpassed quality of the Letšeng mine.”

Here’s a list of the most newsworthy stones to come from Letšeng, which is billed as the highest dollar-per-carat kimberlite mine in the world.

The newly unveiled 910-carat rough diamond has an equivalent weight of 182 grams, or 6.41 ounces. A baseball, by comparison, weighs 5.25 ounces.

The United Kingdom-based Gem Diamonds holds a 70% stake in the Letšeng mine with the government of Lesotho owning the remaining 30 percent.