Playing on the
Need for Speed

CHRISTINA MEDAWAR, a third-generation jeweler, had long wanted to spin off a concept store from her family’s company, Medawar Jewelers, a group of four traditional Midwestern stores with a focus on the bridal customer.

In November 2013 she got the chance with the launch of Veloce in the Crossroads Mall in Portage, MI.

“I’m trying to have a store where a girl like me can shop,” Christina says, “where you don’t have to break the bank to be on the cutting edge of fashion. A girl out of college, who is fashion forward, who loves playing with jewelry.”

She wanted to express herself with merchandising and branding, and encourage the use of fine silver jewelry as a fashion accessory.

It was also a chance to launch the sophisticated software system her father, CEO Pierre Medawar, had developed and patented.“It’s the first system of its kind,” Christina says. “When you pick up a piece of jewelry to try it on the string triggers the computer system in front of that piece of jewelry and it tells you all about that piece. A girl can shop at her leisure like it’s her closet.”

But first, Christina needed a name and a brand. She consulted with Corina and Miguel Ferreyra-Flores of 707 AVE. The branding consultants had previously worked with the Medawars to develop their store websites.

“We went through several different names in Italian and French,” Miguel says, before hitting on Veloce, which means high velocity in Italian. It’s meant to conjure the image of Christina’s target customer: “The modern day girl on the go,” as well as to allude to the high-tech nature of the store.

Floating jewelry cases are secured with glass shields from the floor to the ceiling. The hydraulic mechanical showcases open and close and lock in place with the turn of a key.

Even though Veloce is in a mall, its owners have worked out an arrangement with mall management to throw parties after hours by invitation only.

The Face of Veloce

Christina Medawar is now the face and voice associated with the Veloce brand. She plans to launch a photo-heavy blog. She also explains the store on its website in a video.

The store plans to brand each quarter of the year as a whole, picking three main lines to promote each time, offer a giveaway and plan an event around the brands. Veloce sells Swarovski, Pandora, Metalsmith Sterling, Gabriel, Hot Diamonds, Rebecca, Breuning, Bastian, Charles Garnier and the Tacori fashion line.

Although their target customer is an independent woman in her 20s to 40s who is daring and adventurous, Christina has found that Veloce is appealing to all manner of shoppers. “I thought I’d be hitting one demographic, but we’ve been getting a lot of stay-at-home mothers, college and high school students,” she says. “And girls — and some guys — who are loving the idea of going in and playing with jewelry and not having to answer questions like “Do you want to try that on?” or “What is this for?” “We have staff there, of course, and we’re very cordial but a lot of the information is already on the computer. They can shop at their own leisure and they like that.”

Brands in the store are primarily high-end silver lines, such as Metalsmiths Sterling, Swarovski and Gabriel. Corina and Miguel plan to pick three main fashion lines each quarter to promote in every way possible, including with events. 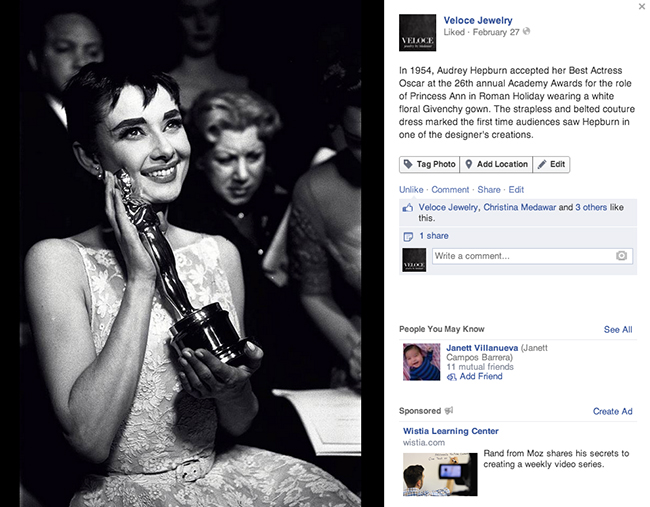 The social media message is not always about the product. It’s mixed with fashion and celebrity posts. “We try to use images that create emotion and flow with the Veloce brand of luxury and high-end,” says Corina Ferreyra-Flores, CEO of 707 AVE.

Veloce has begun collecting names for a loyalty club to build its Facebook page. Shoppers may be able to collect points sometime in the future.

The Veloce website is used currently to bring people to the store, but eventually it will also be used for e-commerce.

Shortly after Veloce opened, they partnered with Swarovski for a Black Friday contest. Shoppers could scan an interactive display and instantly enter in the store.