A health crisis gave him the chance to take stock and change direction, he pursued his love for design instead

AN EYE FOR STYLE is essential for a jeweler, but Vicente Agor has a head for numbers, too. His first career made the most of the latter. After a string of high-flying investing jobs, he launched a consulting business of his own. When a health crisis gave him the chance to take stock and change direction, he pursued his love for design instead. His long list of enthusiasms — from travel to film and music — inspire the recycled gold and gemstone jewelry collection he started as his life’s second act.

“In college, I was an economics major, but in my heart of hearts I wanted to be Mr. Fashion. For a little while I worked in retail, but I got an offer to work at Xerox, and that led me to the investment industry. Eventually, I started a consulting company. Sometimes I would help train big groups — 800 to 1,000 people — by explaining difficult investment concepts. I loved it. I was good at taking something super-duper complex and making it palatable. And I’m a little bit of a ham. I love an audience.”

“Before getting into the investment industry, I started a fashion costume jewelry line with a friend. They were outrageous 1980s pieces that were huge! We used Crazy Glue to put them together, and Nordstrom even bought the line. But after four or five years we stopped; my investment career was starting to take off, and minimalist fashion, which was the polar opposite of what we were making, came along. I love fashion and creativity but I have a brain for business, too.”

“About 15 years ago, I developed kidney disease and needed a transplant. I had to choose between a seven-year wait list for a kidney or a two- to three-year wait for a double kidney and pancreas transplant, which would also cure my diabetes. The double transplant would be much more arduous, but I went for it anyway. I was determined to stay super-duper positive through the whole thing. I just decided to be as bright and as normal as possible and not get depressed. And it worked! That’s my mindset. It’s all about pushing through.”

More Than a Number

“I lead seminars to make the public aware of the need for transplants and organ donors. Each time, I’ll tell them the exact number of people waiting for a kidney transplant that day — it’s usually about 86,278. I always give a precise number because it’s not some impersonal quantity of widgets; every number on that list is someone who is waiting. My older sister was also diagnosed with kidney disease, and she passed away while on the transplant list. I want to help each one of those people in her memory.”

“After my surgery, I was able to take time off and decide what I wanted to do. Choosing to make jewelry was a second chance at life — to pursue something that I really wanted to do. I knew I wanted to work with gold and real stones. My not-so-silent partner Michael [Pfeffer] and I work together. He does behind-the-scenes things, like marketing materials and merchandising. We also collaborate on the jewelry designs. He’s very good at editing our ideas.”

“We made a promise to ourselves to travel and try something new every year; that’s how we find themes for the jewelry. In 2004, we designed our first collection, Moroccan Garden, after becoming fascinated with Islamic art during a trip to Egypt, then researching a lot of Spanish mudéjar architecture. We have a very personal process. Whether it’s memories from childhood or armchair travel, there’s a story behind each piece.”

“The first thing you see on our website are words — confident, fabulous, discerning, urbane — that describe our mythical muse, and the women who have been on our mood board since the beginning, like [architect] Zaha Hadid and [actress/model] Marisa Berenson. We started featuring our real-world muses on the site because I was tired of seeing exploits of some really vapid ‘it’ girls being broadcast everywhere. It’s important to me to glorify women who are smart and contributing to the world and who have a sense of adventure.”

Getting Personal With Vicente Agor

Do you have secret talent?

“Dancing. I was on Soul Train in the 1980s while Rosie Perez was there.”

“Thailand. The people we met there were so gracious. It’s the people you surround yourself with that make a trip.”

Do you have a guilty pleasure?

“It’s not what happens to you. It’s what you do after it happens.”

What would you do if you won the lottery?

“I’d create an investment plan. Then, I would pay back my parents, Michael’s parents and everyone who’s helped us along the way.” 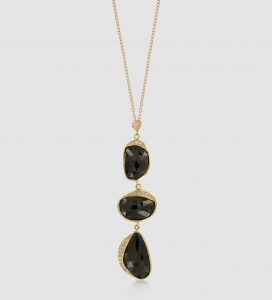 Related Topics: Vicente Agor
click to Comment(Comment)
Up Next

How to Learn a Client’s Budget Without Asking, Plus More Tips for September

4 Steps to Follow When Working with Millennial Engagement Shoppers