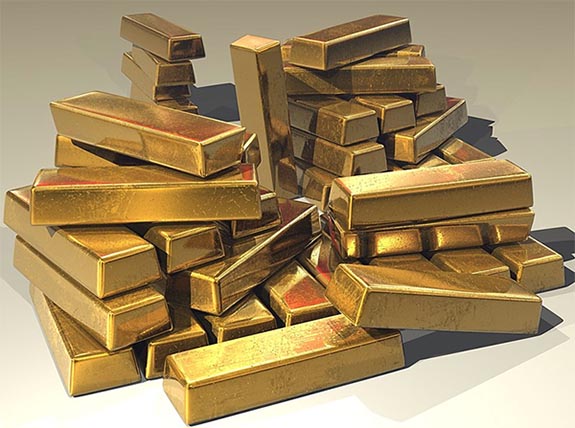 Credit: Image by Stevebidmead [CC0 or CC0], via Wikimedia Commons.

Precious-metals experts are claiming that the world is at “peak gold,” the critical point when the amount of gold mined out of the earth will begin to shrink every year, rather than increase. With aging mines yielding fewer ounces and the number of major new discoveries dwindling, global gold production is no longer able to keep up with demand.

“If I could give one sentence about the gold mining business … it’s that in my life, gold produced from mines has gone up pretty steadily for 40 years,” Ian Telfer, chairman of Goldcorp, told the Financial Post. “Well, either this year it starts to go down, or next year it starts to go down, or it’s already going down… We’re right at peak gold here.”

The jewelry industry consumes nearly 53 percent of the global demand for gold, while other sectors lag far behind. They include bar and coin bullion (25 percent), electronics (9 percent), other industries (7 percent), central bank purchases (5 percent) and dentistry (1 percent).

The biggest reason why gold supplies are expected to drop is because mining companies are finding fewer and fewer new gold deposits.

Pierre Lassonde, the billionaire founder of Franco-Nevada, a company that invests in mining operations, told Business Insider that there haven’t been any blockbuster gold discoveries in the past 15 years.

A startling report by Goldman Sachs on commodity scarcity outlined a scenario in which the world could run out of mineable gold in 20 years.

Meanwhile, aging mines are yielding less. South Africa, once a world leader in gold production, is expected to run out of gold within four decades, according to a recent study.

While the combination of falling output, shrinking reserves and strong demand could lead to shortages and higher prices of the precious metal, the possibility remains that new methods of detecting gold deposits or more efficient ways of mining them could bend the production curve upwards again.

When the oil industry hit its peak production about 10 years ago, the industry developed new fracking and horizontal drilling technologies to help make up the difference. The energy sector also invested in alternative industries, such as solar and wind.Unlike the energy sector, however, the precious metals sector has no substitute for gold.

Advertisement
Related Topics: Howard Cohen
click to Comment(Comment)
Up Next

Jewelers, Don’t Be Like the Last Blockbuster Store Left in America

America’s Coolest Stores: Before You Start

America’s Coolest Stores: Get Your Contest Entry in Great Shape

GN Diamond Presents: Getting Ready for Xmas — How to Close Sales Quicker