If the watch fits, you must acquit! The Juice is loose on this killer timepiece. Image provided by jeweler Alex Artinian.

This watch portrays “The Fightin’ Lil’ Judge,” a.k.a. George Wallace, former governor of Alabama and deemed “the most dangerous racist alive” by Martin Luther King, Jr. in 1965. Says jeweler Ed Retherford: “I purchased the George Wallace watch approximately 25 years ago, over the counter. Only one I have ever seen. Not sure but I think this was way before he became governor, and definitely long before someone shot and paralyzed him. The ugly part of this watch is what he represented.”

We “guess” that Guess thought that a watch that closed like a clutch purse was a good idea. Says owner Lisa Groves: “We acquired this watch a while ago as part of an estate buy. Purchased the good, the bad and the ugly, lol.”

This image was swiped from “A Blog To Watch” by jeweler Gianina Reichborn, who adds, “But since it’s so hideous, this may only be the second time it’s ever been showcased. So, there’s that.”

Is it a dull gemstone bracelet or a gaudy gold watch? You choose! Image provided by proud owner Stacey P. Horcher.

There’s a watch for everyone, and this mod-inspired timepiece was jeweler Debra Kraft’s favorite back in 1970. “Wore it all the time, even in water,” she says. “Awfully ugly now, but still runs after winding!”

Pulled from the ugly fake scrap box, we present: the two-tone stretch and the CZ bezel! Helpfully provided by jeweler Lisa M. Forrester.

We imagine this Invicta watch feels especially traumatized after being assaulted by a rainbow. Hopefully, jeweler Matt Feistamel found a pot of gold underneath it.

This Gucci watch is supposedly inspired by skateboarding, says owner Eric Hoffmaster. “When it came into the shop for consignment, I was pretty sure it was a bathroom scale to wear on your wrist. Weighing stuff on the go? Nope, that’s the time.”

Someone gave this garish watch the finger, in a bad way. Image provided by Brendan Thielman. 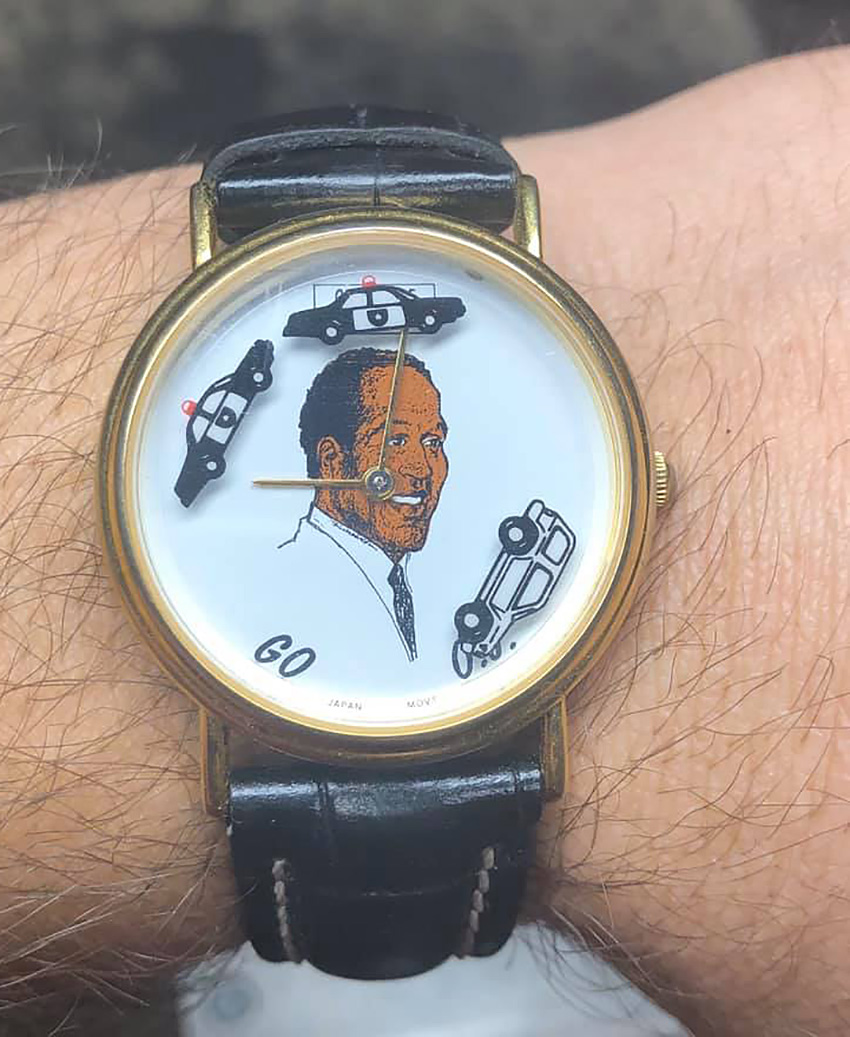 10 Watches So Ugly They Could Haunt Your Dreams

If the watch fits, you must acquit! The Juice is loose on this killer timepiece. Image provided by jeweler Alex Artinian.