The business's third location looks like it will last for the long haul.

WOU CAN TRUST J. Van Simpson with your family jewels. He just built a brand-new custom-designed case for his own.

Location is critical. The Simpsons’ store has moved three times since Van’s parents opened the business in Dorado Springs, MO, in 1958. Its latest location is on the heavily traveled route to Little Rock: “No one leaves town without seeing our sign,” Van Simpson says.

The goal was to capture the laid-back, rustic personality of the town of Searcy — with a modern twist.

Architect Barry Hoffman designed the building around a massive bank vault left from the previous structure’s original tenant. With respect for its history, Simpson resigned himself to replacing the venerable Diebold vault’s missing door — easily a $30,000 expense. But contractors found the original in working order. It had been encased inside a wall of the structure by the building’s second owner.

A steeple-like entry, with an antique curved wood-and-glass door, evokes the store’s emphasis on wedding jewelry. Interior designer Amanda Jerkins created the exterior design around the concept of a small country chapel. Inside, the old wood flooring and cloud-tone walls weld Colonial Williamsburg and Tomorrowland. The structure provided an opportunity for architectural details such as a vaulted ceiling. It also presented the chance to embark on a treasure hunt: The antique front doors came from Brooklyn, NY, via an architectural salvage business in Cullman, AL. The floors are from a 1902 Louisiana homestead. The watch benches were handmade in 1958 by Lloyd Trantham, Van’s grandfather.

Large, strategically placed LCD screens show customers the details that can be custom-designed into rings, or display what’s happening in the shop, which is equipped with a camera.

“We’ve spaced a lot of flat screens out where people can see them,” explains Simpson. “It’s fun and I think it gives the people the feeling of being tech-savvy.”

But vintage wedding photos and a stuffed moose head remind them they’re in a folksy, casual town, home to Harding University, natural gas drilling operations and Hurricane Lake, with verdant hunting and fishing country in the Ozarks foothills.

Tall windows, set near floor level, and a circular pane in the gable let light flood in. Another vintage leaded-glass window allows customers to view a bench jeweler at work in the shop.
Finding ideas to steal was difficult.

“Everywhere we go we looked around for stand-alone buildings and there aren’t any. In a city like Nashville building is so expensive. That’s an advantage of living in a small town like this.

“But there’s not a lot to copy. There’s nothing to see, except maybe a few restaurants. And banks.”

Going for the right feel is important to Simpson. Although he had planned to re-use cases from the previous downtown building, when he saw Interior by Stuller’s front load cabinets at the Smart Show in Chicago, he realized they made absolute sense for Tara customers.

Front-load cases bring the salesperson out shoulder to shoulder with the client, and eliminates “that stuffy feeling where it’s salesperson against customer.”

“Plus, it opens the store up. You don’t have to walk around the back of the case to open it up.”

Another detail is the sound system that pipes an Internet mix of up-tempo ’80s rock and pop at a gentle volume around every segment of the store, beginning in its enclosed foyer.

“I had an audio company come out and install speakers all over the store. It’s equalized really well, so it’s not overpowering in one area and too low in another. At the old store you were trying to run a six-CD changer all the time.”

Seven family members, including Simpson’s mother, work there at least part-time. The company dates back to the watch repair business Van’s grandfather, Lloyd Trantham, founded in Missouri in 1942.

“The big advantage of working with a family member is, to begin with, just the trust,” Van says. “I don’t have to worry about stealing or somebody going to work for somebody else. Beside the trust factor, there is the experience and knowledge handed down.

“On the other side, there’s a limited knowledge base. Family knowledge is all that you have, and it’s hard to think outside the box,” he said.

“The biggest thing that has happened to us was when we joined IJO, mainly because of the interaction with other jewelers. The ability to freely share ideas with other people you’re not competitors with is really important.” 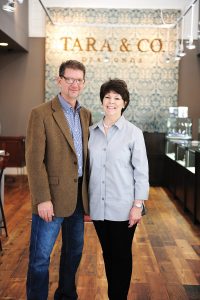 1. THE NAME: Tara & Co. Fine Diamonds was actually named by Van’s parents after his sister, who, ironically, didn’t join the business. Van and Rachel Simpson kept the name, however. “‘Van’s Fine Diamonds just doesn’t have a ring to it,” he says.

2. NO STRANGERS HERE: “We cut our own radio ads right here in the store at the ‘Tara & Co. official Platinum Plated Microphone,’” Van jokes. Four family members record the commercials and get nearly daily comments on them. “We’ve even had several people stop by just to meet us.”

3. IDEAS: The company encourages its employees’ original ideas. Its bench jeweler, Nathanael Fatula, suggested the herb garden and tends it himself. He also designed a line of silver jewelry for a Ghana project, “Village of Hope,” which receives 100 percent of the proceeds of its sales. The jewelry helps provide shelter, food, and education to job training for children in Ghana.

4. UPGRADED DISPLAYS: The Stuller cases are equipped with LED lighting that Van supplemented with overhead LED track lights from Eco-Lite that work together to add “incredible fire” to the diamond inventory. Larry Johnson of Pacific Northern helped customize the new displays and taught the staff how to properly set up the cases.

5. A TROPHY BULL: A big bull moose head keeps watch over the exit doors — and he has a family connection. In 1964, Van’s father, John, uncle George and grandfather John K. Simpson went to Canada and brought home a trophy bull. He’s been passed around the family but now has a permanent home at Tara & Co. where he becomes the subject of many a conversation in a rural community where hunting and the outdoors are a part of life.

Try This: Riding the Range

Van says he’s learned that sometimes the biggest mistake you can make is not buying into a popular, lower-end line “just because I don’t like it. If you turn your nose up at popular but lower-end brands, you miss the opportunity to draw people into your store who may very well be your best diamond buying customer a couple of years from now.”

Julie Romanenko: love the mix of old and new, whitewashed walls and old stained glass are all very visually appealing. Not so sure about the moose head! This sounds like a family business that has done it right on many levels. They have “kept it in the family” but also kept up with the times.

Bruce Freshley: Tara’s radio ads are very, very good and do what all radio ads should: create a warm positive connection with the listener. After just three ads I feel I know Van, Rachel and Logan. Most important, I like them. Oh, and love the moose.

Gerry Gonda: The owners addressed the exterior with an inviting entrance and complementary window placement. The barrel vault and ceiling are well conceived, drawing your eyes through the store to the graphics and signage on the rear wall. Excellent use of material on the vault surround, correlating to what is used on the rear wall, gives a cohesive feel to the interior. Great execution of a plan.

Danielle Pelletiere: I love the modern twist on a rustic atmosphere. I feel like this design style incorporates the generational theme of the company. The jeweler has done a great job focusing on its niche market: custom bridal. By having a broad selection and a camera on the repair shop, the store has thought of a lot of ways to keep the bride engaged. That they do their own radio ads in-house is a playful marketing approach that not a lot of jewelers would be willing to try.

R. Grey Gallery: We love the interior paint job and displays. Everything is crisp and modern, but the exterior brick and interior wood floors give it charm. Additionally, the website has a lot of clear information.