Dems Jewelers: For nearly 34 years, Dems Jewelers was a solidly successful jewelry store — despite an uninspiring location in a local strip shopping center 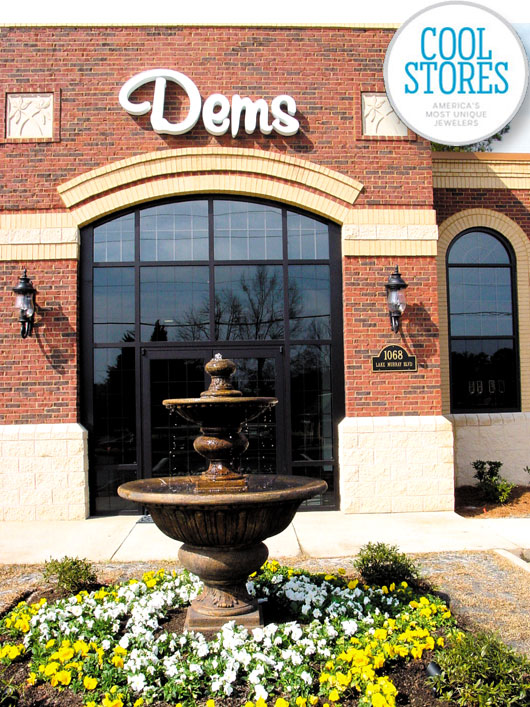 For nearly 34 years, Dems Jewelers was a solidly successful jewelry store — despite an uninspiring location in a local strip shopping center. Many business owners would have thought: why mess with a good thing? But that’s exactly what Steve Livingston and his sister Deborah Lucas decided to do.

The pair wanted to build on their success over the past three decades with a more visible, freestanding store of their own. After traveling neighboring states looking at other freestanding stores, Livingston and Lucas broke ground on their new store in June of 2003. And in February 2004, Dems Jewelers introduced its new home — a personality-filled beauty with loads of creative touches, including a stunning dome and chandelier that serves as the store’s central focus point. Only time will tell if Steve and Deborah’s big gamble will pay off. But the early returns are looking … cool.

How long have you been at this address?

We just moved to this address the first of February 2004 after being in a strip shopping center since 1969. We considered this a “must” move. But we still had a little bit of fear about moving a store that has been good to our family and staff from the beginning.

What is the most unique feature of the store?

That would have to be the dome. It measures  eight feet in diameter and is painted to create a faux-marble look which complements the color and pattern of the floor tile. While gathering ideas about how to design our store, we looked at many freestanding stores in three neighboring states to get ideas. Wade’s Jewelers in Gibsonville, NC, had a dome and they were very good about offering construction details. The dome also has up-lighting, which is concealed behind the molding, to illuminate the dome itself. The up-lighting was created by placing five-watt bulbs every two inches. From the center of the dome is a pewter finished chandelier with Austrian crystal. Beneath the dome is a specially designed work center with fresh flowers.

Describe the interior of the store.

We used a combination of tile and carpet. The foyer entrance has double entry doors, an 11-foot ceiling, and a tile floor and accent designer wallcovering. The interior walls are painted a silver/white with all moldings being a true bright white. The tile has a white marble look and blends into a deep taupe colored carpet with a cream open floral design. The showcases are a stone laminate. We used Solux low-voltage lighting in combination with fluorescent lighting. Also, we’re a premier Swarovski Crystal Gallery dealer, so we have a designated area for Swarovski showing their line in their new fiber-optic lit cases.

Who did you design? How closely did you work with them?

My sister, Deborah Lucas, had the idea. We brought her ideas to a local architect for the fine tuning and the actual architectural drawings. He worked very closely with my sister and me.

Were there any specific requirements when it came to building the jewelry store?

The most intricate part of the construction was the exterior brick work. There were three types of brick and three types of mortars used. The colors chosen were a basic red brick, a cream block and a cream brick. The brick layers had to completely change mortar and clean their equipment every time they went from one brick type to another — even if they laid just a few bricks. It was important to get it just right as the intended result was to create a 3-D effect.

How much did it cost to build the store?

The entire investment, including land and building the store, was about $1.3 million.

How do people usually react to the store?

The first couple of weeks have been very encouraging. We have had nothing but very positive comments. While in the shopping center we never had direct road front exposure. Now we do!

Every person visiting has commented on how beautiful the building is. For those who were watching the construction since we broke ground, they have come into the store saying its interior far exceeded their expectations. We have even had other contractors stop to visit and one sign company stopped to touch and feel the road side sign.

This story is from the May 2004 edition of INSTORE