An Institution: Without feeling too institutional 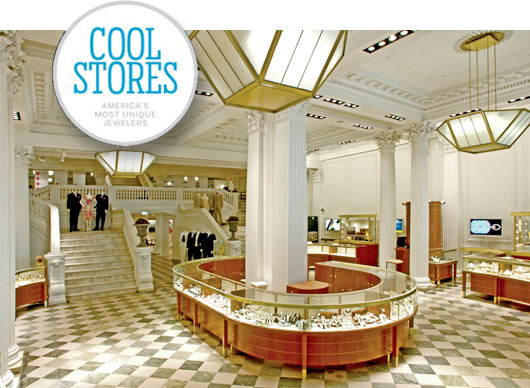 Danny Govberg, 47, is a bit of a maverick. He trusts his instincts, works hard and hopes a dash of luck carries him over any rough patches. When he joined the family business in 1983, he threw his energy into watches on a hunch, even though fine timepieces were off the industry radar. And in 2005, when he closed his successful freestanding store on prestigious Walnut Street and moved into Boyds department store, observers were confounded once more.

Today 65 percent of his business is in high-end watches, and Philadelphia’s well-heeled must walk through his store to dine at sophisticated in-house eatery Brasserie Perrier or ogle Ferragamo loafers at Boyds. What could be luckier than that?

Govberg Jewelers boasts more than 40 fine Swiss watch brands, several of which are carried exclusively in Philadelphia by Govberg. But without the knowledge and service to accompany these coveted timepieces, Govberg says he wouldn’t have developed a loyal customer base.

“We’re almost like watch advisers,” Govberg says. “Nobody doesn’t know the product.” He strives for service on the level of a Mercedes Benz dealership, where sales staff knows the function of every bell and whistle. “If a person comes into the store and wants to buy a Hublot and the salesperson doesn’t know the top 50 things about the brand, they shouldn’t be selling the product,” he says.

This quality service, though, happens not because Govberg is there to supervise. In fact, his office is off premises. He hires talented people, gets out of their way and lets them do their thing, he says. On a day-to-day basis, the business would run perfectly, even if he were lying on a beach somewhere. Micromanaging, he has observed, does not make a good business model.

STORE WITHIN A STORE

Becoming part of a super-boutique has put Govberg Jewelers at Boyds on the map for Philadelphia’s luxury seekers. When Boyds, a men’s store founded in 1938, decided to expand its focus to include women’s fashion, it was looking for a powerful magnet in the front of the store. Kent Gushner is a third-generation member of the family that owns Boyds and a friend since childhood of Danny Govberg.

Watches seemed the perfect fit to ensure both men and women would feel comfortable coming in, Govberg says. They asked restaurateur Georges Perrier and his Brasserie Perrier executive chef and partner Chris Scarduzio to create the city’s only in-store gourmet cafe. Perrier’s  Le Bec-Fin has consistently earned five stars in the Mobil Travel Guide, adding to the venture’s cachet.

Each player in the arrangement already had a powerful identity and reputation. Combining the three has made them all stronger brands, and increased Govberg’s foot traffic tenfold, he says.

Boyds moved to its current location at the historical Peale House, formerly the Pennsylvania Academy of Fine Arts, in 1990. Govberg’s challenge was to make the space on the first floor his own while preserving the building’s history. He chose Robert Taczala of Brand + Allen Architects of Houston largely due to the firm’s passion for the project. It was a good fit in other ways, too.

Brand + Allen’s portfolio includes luxury retailers such as Marc Jacobs, Prada, Gucci, Tiffany & Co. and Louis Vuitton. Taczala says he was inspired by the chance to work within a building listed on both the Philadelphia and National Register of Historic Places. Designed by famous Philadelphia architect John T. Windrim in 1907, it was originally a five-story funeral home for the Oliver H. Bair Co.

“We both agreed that the existing architecture of the space required a great deal of respect,” Taczala says. “Yet, since this was a significant relocation for Govberg Jewelers, Danny wanted to make the statement that, although they’ve been in business since 1912, they were to be perceived as an up-to-date, hip and contemporary jeweler, even a little edgy. If the room was Renaissance architecture then Govberg was to be a Renaissance jeweler.”

The project came with an intriguing set of challenges, including lighting and air conditioning a space with 16-foot-high columns and ceilings. “Probably the easiest solution to lighting the store would have been to suspend light tracks down to 10 feet,” Taczala says. “But this would have detracted from the appearance of the rich, intricate plaster work on the ceiling.”

Instead, recessed, adjustable light fixtures were used. “Although now it looks extremely simple, manipulating the arrangement of the lights within the historic beams was a challenge.” The wall displays are clear glass boxes with floating backgrounds. The entire unit is mounted in front of, not on, the historical paneled walls.

Similarly the plasma screens are embedded in clear Lucite panels allowing the  moldings to be seen below and at both sides of the screen. Columns were exposed, returned to their original majestic stature and accented with recessed lighting. Recessed 37-watt metal halide lighting was used for case lighting not only because it’s small, but also because of its brightness and energy efficiency, shedding enough light on the merchandise even when it’s out of the cases.

Openings in the floor from the basement allowed all of the air-conditioning units to be hidden below, and the air to circulate up through the towers. “The greatest challenge? It’s a toss-up between how we were able to integrate the air-conditioning ductwork into the design without anybody realizing the air circulates between the two millwork towers, or, being able to use the plasma screens in front of the historic walls without touching them,” Taczala says. The screens show images of merchandise to customers in a simple, but high-tech format, which provides a sleek, modern contrast to the historical architectural details.

Leave it to the Pros

Brand launches, charity fund-raisers and networking events are all regular occurrences, but Govberg leaves all the planning to Kate Bieg, public relations and marketing director. “I credit a lot of our marketing and event growth to me getting out of it and letting her do it,” he says. “I look at the jewelry business as marketing luxury products to wealthy people. She knows what we have to do to make that work.”

In 2005, for example, Govberg celebrated the opening of the new store with the launch of the Manometro timepiece in an event co-hosted by Esquire. Govberg also joined with Boyds and the NFL’s Philadelphia Eagles to host the Eagles Tackling Breast Cancer kickoff press conference, attended by coaches, owners and players. Since opening at Boyds, Govberg’s VIP appeal has reached new heights. Rock stars, athletes, actors, musicians and even former Israeli Prime Minister Ehud Barak have shopped for gems and timepieces.

1Do you have early memories of the family business? I’m 6 years old and my dad just bought me a toy cowboy gun. So I’m in the store. My grandfather, grandmother, myself, my dad, probably my mother were there. I see a (real) gun behind the counter. I pick it up, point it at my grandfather, and say, ‘I just got one of these. I’m a cowboy. Now I’m going to shoot you!’ He took the gun, said he wasn’t an Indian. He went to get a bottle of vodka and took a shot of vodka. So I almost shot my grandfather playing cowboy in the store.

2Why did you focus on watches when you joined the business? It was my own niche. My dad was involved in the jewelry side and he didn’t think there was any money in watches. The only brand that really mattered was Rolex. All these other brands, half of them didn’t even have distribution. Other jewelers were like ‘What’s a Hublot?’ I adopted the attitude that watches were going to be hot, 23, 24 years ago. Sometimes you work hard and you get a little luck, too.

3What challenges have you faced in growing the business? There’s a greater and greater shortage of supplies from the watchmakers. Hublot has a brand called Big Bang, and we have orders for 30 of them. We receive maybe one a month. They’re just not able to produce enough to meet the demand.

4What advice do you have for other store owners who would like to be in your position? Make sure that your PR/marketing rep-resentative from your company is as talented as your top sales manager.

5What are your plans for the future? We’re launching a plan to do in diamonds in Philadelphia what we’ve done in watches.

Said in the store

Boy, we thought you were crazy when you said you were going to do this thing at Boyds, but now we understand. It was a great move.

This story is from the November 2007 edition of INSTORE