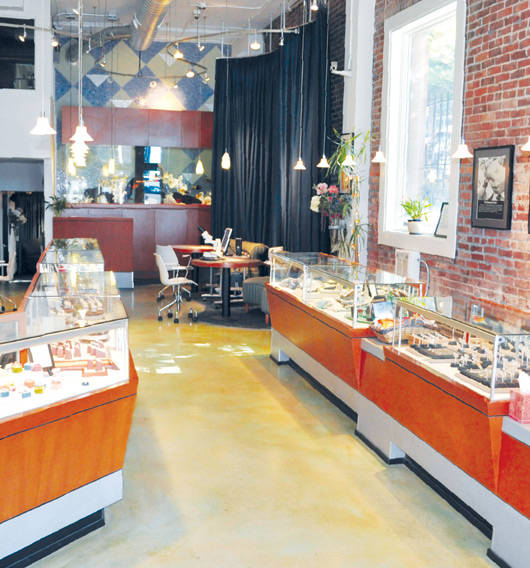 Emerson “Skip” Robbins peppers spiritual concepts like “karma-driven” and “zen” into the descriptions of E.E. Robbins engagement store operations. And why not? He’s in his own third reincarnation. As a teen, Robbins worked for his father in the Pasadena, CA, William Pitt jewelry stores, then opened with his brother what became the Robbins Bros. World’s Largest Engagement Ring Store. Eventually Robbins cashed in his SoCal share to return to his childhood Seattle roots. His own stores, three now, also specialize in diamonds, but with a veritable customer hug of education, atmosphere, even proposal advice. One employee helped a suitor get the ring box pitched to his intended — tucked into the mouth of a salmon in the famous market where catching the fishmonger’s toss is considered good fortune.

1As part of the 2006 remodeling, the back office became a 180-bottle wine cellar with intimate, Starbucks-style tables and a comfy divan for buyers. “It’s very private. Maybe they just don’t want other people around them when they’re making this decision,” Robbins explains. The Seattle store’s 800-gallon saltwater aquarium is another calming influence. “I feel that, No. 1, we want to try to take the intimidation out of looking for an engagement ring. Guys don’t ‘get’ diamonds,” he says. “They don’t understand spending so much money on something so small.”

2In 2009, E. E. Robbins offered free $250 wedding sets to 100 needy couples. With a publicist for radio and Facebook, it drew thousands of entries and national publicity. It also advertised for unique Seattle proposals and culled 2,000 signed-release entries — with prizes of trips, dinners and more — into a “Popping the Question, Seattle Style” book for ring buyers. Says Robbins: “It’s not the ring. It’s how you present it. That’s something she is going to remember the rest of her life.”

3When Robbins remodeled his Seattle store, he went to the writings of pop-culture expert Faith Popcorn and retail psychology writer Paco Underhill. The resulting blue and green motifs came from the feelings of trust and calm those colors inspire. The Seattle store, in a historic brick building, has a retro-looking advertisement on the outside featuring a hand with a sign pointed toward the ring finger that proclaims “Vacancy? Check in here.”

4E.E. Robbins scouts boutique designers who give the store personal attention, among them MaeVona, Lila Boudroux, Scholdt, Studio 311 and the Michael Daniels Collection. “If you’re a designer for us, you’re going to spend some time here. We want them to talk with our salespeople and learn what we’re hearing — and at the same time we learn from them,” said Robbins. On his last visit, designer Mark Schneider surprised the staff with doughnuts.

5E.E. Robbins will gladly custom-design engagement rings. But the only colored stones it will permit in its rings are ruby and sapphire that are hard enough to stand up to daily wear. Robbins says the company will turn down business before risking a fragile product. It’s also strict policy not to oversell: “If you come in saying you are only looking at rings under $2,000, we re not going to show you a $2,005 ring.”

Broadcast proposals: Tell the entire Northwest you love her: Emerson Robbins finds radio advertising good for his market and makes it fun. A current contest asks suitors to submit a reason they should be chosen to have their proposal broadcast on the air at drive time with a radio personality.

What the Judges Said 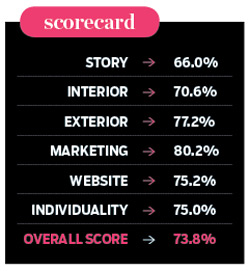 George Whalin: With its classic architecture and distinct selection of merchandise, shopping here is like a treasure hunt for customers, always promoted and marketed with descriptive advertising and unique special events. Owner Sally Hilkene actively participates in local events and charity organizations earning great esteem in the community for herself and her wonderful store.

Patti David: Wow! When you go into Sally’s store, you’ve got to feel like you just walked into a jewelry treasure trove. Her eclectic assortment and beautiful ornate surroundings would make you feel like you can’t leave until you’ve seen everything.

Wolfgang Möckel: Everything about this store, the exterior, interior, décor, way of showcasing the jewelry, etc. creates a warm and welcoming feel. I love how they mix objets d’art with jewelry, and I am sure one always finds something to buy. I also congratulate Churchill’s Sally Hilkene on their noble “giving back” initiatives.

Kate Peterson: The choice of product certainly fits well with the truly unique display materials. It really IS like a walk-in treasure chest. It was hard NOT to buy something (several somethings!) from the website — and I haven’t even found the QR codes yet!

Ken Nisch: Bringing together a very cross-cultural mix of vintage movie palace antiques and fabrics, with a mix of Buddha and driftwood, makes the Churchill experience just that, an experience. With the sense of discovery and treasure hunt, the store is one part museum, one part flea market and one part gallery. With a touch of organized clutter and planned confusion, the overall experience is a great execution of “enough is never enough” for this full-bodied and full-personality store.

Sarah Graham: Churchill successfully bucks tradition with a varied (and plentiful!) product mix uniquely displayed. Sally wasn’t afraid to be different, and her confidence has paid off — a visit to her store will always be memorable and stand out among all other jewelry stores.

This story is from the August 2010 edition of INSTORE