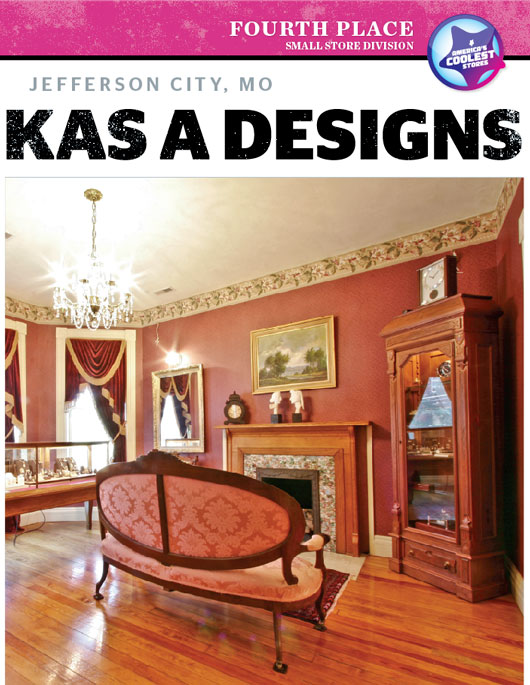 [dropcap cap=I]n 1975, Kas Jacquot was a 23-year-old with an artistic streak, doing her best to make it on a little farm in the Ozarks during the “back to the land” movement. And then a man made her what didn’t seem like a life-changing offer at the time: If she’d give him some breeding sows, so he could get into hog farming, he’d give her some jewelry making equipment, materials and lessons.[/dropcap]

Jacquot had loved working on jewelry since taking apart a costume necklace of her mother’s as a little girl, and with help from her new mentor and others, it turned into a vocation. In 1984, she graduated from the art-fair circuit to opening a store in a small cottage. Now, Kas A Designs occupies two Victorian homes, with a fashionable yet relaxed aesthetic. The look promises something special, and customers have come to trust Jacquot to deliver her own unique brand of delightfulness, again and again.

Funny, with a vibe that’s overtly arty but not flaky, Jacquot made a splash in Jefferson City even before opening her store, when she appeared on the front page of the local paper after winning second prize at an art fair. “I must have looked the artist part, with hair down to my knees,” she says. Her clearly cool personality permeates the business.

With the two Victorian houses, Jacquot already had a grand place to start from; after some remodeling, the store became downright gorgeous. The buildings are now on the National Register of Historic Places. Visitors twist an old-fashioned brass doorbell to be let into a late-19th-century parlor with a fireplace. “I added a crystal chandelier there, too,” Jacquot says. “I always wanted to do that.” The eco-minded renovations also made the shop much more energy-efficient.

Jacquot specializes in high-end colored stones, and much of her inventory is designed by her and made in-house. She goes looking for beautiful gems on her travels (about 10 years ago, she went to a tiny Tahitian island for her own loose pearls) and often finds valuable stones discarded in pawnshops. She bills her collection of loose color as among the largest in the country.

“I’ve always been a creative advertiser, and I am known as ‘the billboard lady’ in the area,” Jacquot says. The recent “Kas Is Back!” campaign showed her from behind in a sexy, low-cut dress. The image was far from scandalous, but it got noticed. “Some friends had a guy coming from South Africa to visit,” she says. “He drove in, and the first thing he said was, ‘Bloody hell, man! I saw a naked woman on a billboard selling jewelry!’”

Jacquot has never been shy about putting her image and outgoing personality to work for the business. Her most successful long-running promotion is “Kas Kash”: Customers get $1 in credit for every $20 they spend, in the form of bills featuring “The Jewel Queen” — Jacquot in a tiara.

Ruth Mellergaard: This is a really strong brand story visually. The buildings, the landscaping, the entrance and the various rooms, all are in keeping one with one another. Plus — what a bonus — she has a sense of humor, which removes the possible intimidation factor of so much beauty.

George Whalin: The beautiful brick and wood on the exterior of this store helps create an old-fashioned kind of shopping experience before the customer even enters the store. Once inside the red draperies, antique-style furniture and fixtures all help the customers feel as though they are shopping during an earlier time in history. With today’s hectic lifestyles, re-creating an experience that harkens to earlier times proves very appealing to shoppers.

Terry Chandler: Victoria reigns, at least in Jefferson City, MO, at Kas A Designs! Beautifully situated in two perfectly restored Victorian homes, the creative and original designs of Kas Jacquot sit side by side with period antiques and amid case after case of special and one-of-a-kind jewelry creations. This blending of old and new makes the store itself a one of a kind. The word sumptuous comes to mind, and the sense of value and expertise that is communicated by the surroundings and the décor deliver the customer into an extraordinary world where they will feel like royalty. Would Queen Victoria have uttered the word “cool”? Probably not, but those lucky enough to visit Kas A Designs surely would!

Suzy Landa: How refreshing: Marketing materials with a sense of humor!

Don Muller: Loved the advertising! I think anyone would have a good time hanging out and supporting this store. A jewelry store with a sense of humor! Hmm … what a novel idea.

“So much color is just being dumped, because pawn brokers and even a lot of jewelers don’t know how to test it and assume it’s enhanced,” says Jacquot, who scouts pawnshops regularly. Though she too sometimes ends up with a synthetic, she’s found enough gems at rock-bottom prices that it more than evens out.

Johnny Winter, Love, Life, and Money, B.B. King, Since I Met You Baby, Dr. John, Such a Night, John Fogerty, Hot Rod Heart, The Fabulous Thunderbirds, Born to Love You and Ain’t That a Lot of Love, Howlin’ Wolf, Sittin’ On Top of the World

“I just visited this store for the first time in search of Pandora jewelry. I had seen the billboards for years, but had never been in and it was such a pleasant surprise! It is such a lovely store, and everyone was helpful, cheerful, and well educated. Not only did I find Pandora, but Kas is now custom designing a ring for my 20th anniversary.” – VICTORIA C., CITYSEARCH