For years, diamond companies have circulated a chart that looks like a crocodile’s gaping mouth: It shows demand rising and supply falling.

But that’s not what has played out in the real world, Bloomberg reports. 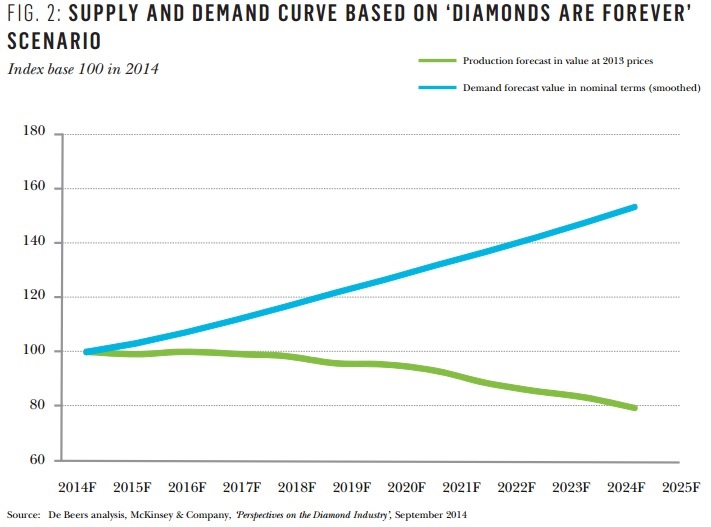 Companies such as De Beers and Rio Tinto have rolled out the chart a various points. But the truth is that the illustration glosses over a key fact, which is that “the industry’s 15,000 different categories of diamonds are performing in very different ways,” according to Bloomberg.

In other words, it’s complicated.

Prices for rough diamonds have indeed climbed 8 percent overall over the past year, Bloomberg notes. But the picture is much less rosy for lower-quality diamonds than it is for high-grade gems.

Lower-quality gems are being hit by several factors, including excess supply and recent policy in India banning the country’s two largest currency notes. (That move was designed to make life difficult for people involved in money laundering and tax evasion, but it also caused Indians to put off buying many big-ticket items.)

The lower-quality diamond market is also likely to be more sensitive to disruptions caused by the growing trend of lab-created diamonds.

In February, Gem Diamonds Ltd. said it was calling it quits for now at Ghaghoo, a Botswanaa mine that focuses on lower-price diamonds.

For the foreseeable future, the answer to questions of how the diamond market is doing will be, “It depends.”

Advertisement
Related Topics: De Beersdiamonds
click to Comment(Comment)
Up Next

Burglars — One in a Pig Mask — Hit Jewelry Store, Cause Lockdown of Hotel