SUCH A JUXTAPOSITION of opposites: A sleek and contemporary jewelry store, shoulder-to-shoulder with buildings more than a century old, on the main square of a small agricultural and mining town. Who would have imagined? Well, Cliff and Kelly Hughes, the owners of that store, Jamies The Diamond Mine in Virden, IL, imagined it. And in 2005, they made their dream a reality. “My wife and I both like modern design, so it was important that the renovated store look more like it should be in Chicago or St. Louis, which are the closest metropolitan cities to us.”

That it does — in every detail, from the black granite outside to the Euro-style track lighting inside. Kelly and daughter Brittany spearheaded the remodeling, working with Craig Ladage Builders in nearby Auburn. From start to finish, the project took six months, but collecting ideas for the remodeling took years. Many inspirations, in fact, came from magazines and restaurants, Cliff says, which they’d been gathering for decades. “When we’d see something that made us feel relaxed, comfortable, and approachable, we’d say, ‘Let’s do that someday when we redo our store.’ And so we finally did.”

He credits the concept of the shop’s water wall to an indoor wall fountain they saw in a Las Vegas restaurant. “We both thought the sound and sight of continually running water was calming and peaceful.” The water wall is a conversation starter as well, with new customers often asking if it’s real and putting their hands under the falling water — just to be sure.

When customers stand in front of the indoor fountain and look through the water, they can see something else atypical in a jewelry store: a floor-to-ceiling step-like display area that the Hughes refer to as the “stairway to heaven.” They use it as a multilevel display area, which Brittany, who was an art major in school, often restyles with seasonal decorations, flowers and plants, and whatever she uses to also refresh the window displays and jewelry showcases.

Speaking of showcases, because the interior of the store is much longer than it is wide, they decided to position the showcases so that they’re curved like a bow, giving customers more walking space in the middle of the store. The curving outline is mimicked above by creating a sinuous shape with the contemporary track lighting that’s attached to black ceiling tiles. “We saw those tiles in a restaurant in St. Louis,” Cliff laughs as he confesses to “stealing” another design idea from an eatery, “and, again, we made a mental note to do that whenever we renovated our store because the black tiles look less generic and classier than the white ones.”

With streamlined appearance a paramount concern, they custom-built a blue-tiled cash counter, deliberately making it raised and softly rounded (as opposed to straight or right-angled).

“This way, customers won’t see clutter when they walk in,” Kelly explains.
A modernized mind-set also sparked the idea of an entire wall of cubbies. While 80 percent of what Jamies The Diamond Mine carries is jewelry and watches, they also sell brand-name handbags and art glass paperweights, vases, and gifts — items that can take up a good deal of space. The solution? One wall with two dozen modular built-in cubbyholes, which serve as display areas for all the non-jewelry/watches. The recessed cubes are open and organized, Kelly says, “nothing is hanging because they’re in the way, and that adds to the serenity of the space.”

Although the couple changed the visual aspect of their store, they continued with the same kind of merchandise, services and promotional plan. They are especially known for handcrafted designs (which Kelly creates), and professional on-site repair and restoration, both of which are emphasized in their billboard, direct mail and newspaper ads.

“We’ve done outdoor advertising for about five years,” Cliff says, “and people often come in and tell us, ‘I saw your billboard.’ Their billboards display attention-getting slogans like “because you rock,” “extra weight she won’t mind putting on,” “try this on for sighs,” and “get in shape,” which are repeated on mailers sent to their customers to promote events.

A family business such as Jamies The Diamond Mine is a perfect fit for Virden, a community of hard-working families in the agricultural and coal mining industries.

Cliff and Kelly met in 1979 at jewelry school in Illinois, where they learned skills including repair, stone setting and lost wax fabricating/ casting. By the time they purchased Jamies Jewelry in 1993 — changing the name to underscore the town’s mining history — it was easy to mesh their experience. Kelly raised their four girls while doing part-time repair and custom work for retail clients. Cliff was regional manager for a jewelry store in Chicago and later a sales associate at Neiman Marcus on Michigan Avenue.

It’s been a long time, of course, since Cliff left the Windy City for Virden, but perhaps with the store’s new urban-style décor, city life seems not so far away. 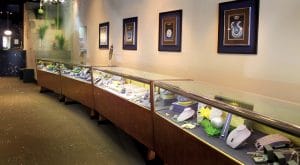 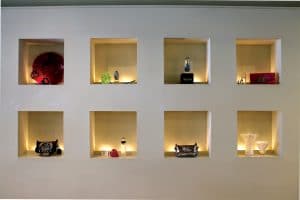 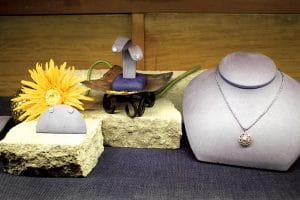 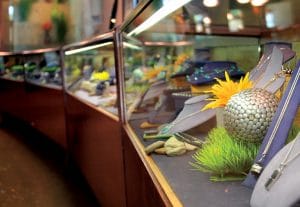 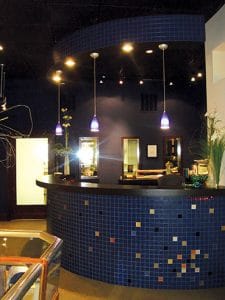 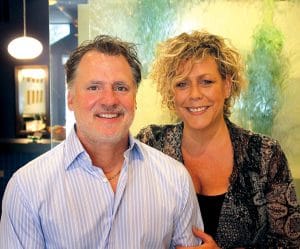 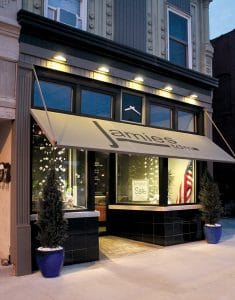 1. HELLO, H2O! An indoor water wall in this Illinois jewelry store gives new meaning to the words “just add water.” Located halfway into the shop, it’s a focal point of the space, setting the tone for a relaxing, pleasant shopping experience. Kelly adds, “People want to know if it’s real, and many of them — especially the kids — like to touch the water.”

2. WALL CUBBIES.  Modular cubbyholes built into the wall serve as display areas for brand-name handbags and art-glass gifts. The 24 cubbies eliminate the need for shelves and cabinets, giving more floor space. Because only accessories are in the wall cubes, it gives them their own home, separate from that of jewelry and watches.

3. PITHY PHRASES.  Clever slogans and using them consistently are key to the store’s marketing. “Attention-getting phrases like ‘try this on for sighs’ and ‘extra weight she won’t mind putting on’ pique people’s interest and they remember them,” Cliff says. “First we put them on billboards and then, when promoting a special in-store event, we repeat the phrases in direct mail pieces and newspaper ads.”

4. STEPPING UP DISPLAYS.  With the store’s renovation, the Hughes created a dramatic floor-to-ceiling step-like display area. It provided a solution to the slanted wall behind it and, in the process, gave the store an unusual multi-level display area, which the Hugheses daughter Brittany regularly restyles with seasonal decorations, flowers and plants.

5. SHOW WHAT THEY KNOW. The owners of Jamies The Diamond Mine like visiting local schools and clubs to give demonstrations. Cliff typically does presentations on gemstones, while Kelly shows students the wax-carving process.

1. FAVORITE BOOK? Living and Loving Out Loud by Cornel West.

2. FAVORITE BUSINESS BOOK? What They Don’t Teach You at Harvard Business School by Mark McCormack.

3. MOST SIGNIFICANT MENTOR, AND WHY? My older brother, Clark. He got me into the jewelry business, and his work ethic and integrity inspire me!

5. ADVICE YOU HAVE FOR A NEW STORE OWNER? Keep it simple, Sir.

6. A PITFALL THEY SHOULD WATCH OUT FOR? Gimmicks.

7. SUPERPOWER YOU’D LIKE TO HAVE? My wife Kelly thinks she can read my mind, so I’d love to be able to “read minds” like her! (wink, wink…)

8. QUESTION YOU WISH CUSTOMERS WOULDN’T ASK. Do you offer financing?

9. BEST CUSTOMER SERVICE YOU’VE EXPERIENCED? “We purchased a cherry-red Saab in a town 200 miles from where we lived. The dealer knew I was anxious to get the car but that I couldn’t pick it up until the following week. Two days later, I woke up and found the car in my driveway, and with a full tank of gas! Soooooo cool!”

11. WHAT HAVE THE LAST FEW YEARS TAUGHT YOU? That I am certain of nothing!

12. IF I WERE A PRECIOUS STONE, I’D BE … An E color, VVS2 clarity diamond because although it’s not perfect, it’s still great.

15. BEST VACATION? Italy. Our daughter Bailey was studying abroad, and eight of us — including our future son-in-law — traveled to Italy, where he proposed to our other daughter Brittany, in Florence.

16. FAVORITE JOB AT WORK THAT DOESN’T INVOLVE CUSTOMERS? Putting out the “goods” each morning.

17. CAREER GOAL? Keep building the business to hand off to family.

Related Topics: Jamiestdmjewelry stores in Illinois
click to Comment(Comment)
Up Next

Cool Store: Jamies The Diamond Mine