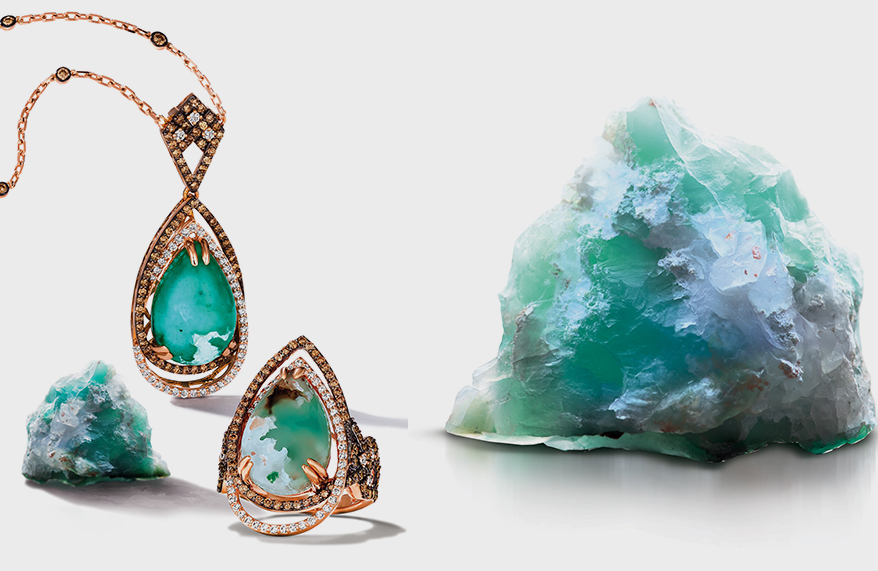 (PRESS RELEASE) American family owned jeweler to the stars Le Vian, one of the world’s oldest independent fine jewelry brands, donates to The American Museum of Natural History a selection of rough and polished gemstones, as well as finished Le Vian Couture jewels, that are set to shine the light on the first gemstone discovery of the 21st century, Le Vian Peacock Aquaprase.

Aquaprase was discovered in 2013 by veteran gem explorer and Le Vian friend Yianni Melas in only one location in Africa while studying a previously undiscovered deposit of blue-green chalcedony. Recognizing something special and different about the stone, Melas submitted samples to several gem labs: his discovery was a never-before-seen type of chalcedony, with a unique combination of green and blue hues reminiscent of waves crashing on a beach.

The highest quality Aquaprase in existence, with the most beautiful colors and patterns, is hand selected to be cut into Le Vian’s own trademarked, superior classification of Aquaprase, named Peacock Aquaprase.

Several beautiful Peacock Aquaprase gemstones will soon be admired by the general public in The American Museum of Natural History, which opens the doors to its redesigned Allison and Roberto Mignone Halls of Gems and Minerals on June 12th, highlighting the beauty of this historic gem discovery.

The Le Vian Peacock Aquaprase treasures will join an already dazzling collection including the 563-carat Star of India sapphire, the 9-pound almandine Subway Garnet discovered under 35th Street in Manhattan in 1885, the 632-carat Patricia emerald and many more.

Advertisement
Related Topics: Le Vian
click to Comment(Comment)
Up Next

Retailers’ Plea to Biden: Give Us Time for Vaccine Mandate

Ask an Expert: Responding to Every Alarm with Peace of Mind