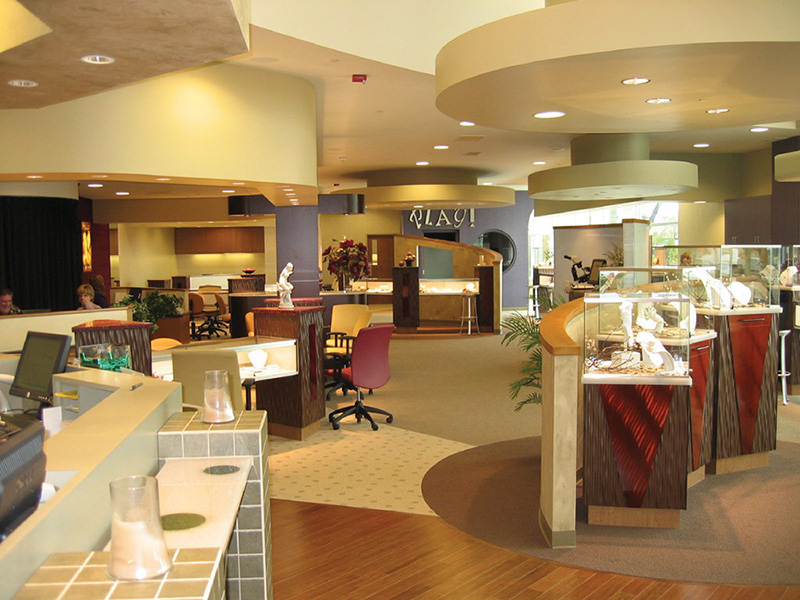 WHY DID THE JEWELER cross the road? To open a larger store! Situated on a busy street near Wisconsin’s largest shopping mall, Richard Kessler tried for years to make the best use of the 1,500 square-foot space that housed his second store. Then good luck, and great timing, provided him with an opportunity that he couldn’t pass up.

A developer razed and rebuilt two buildings across from the Greenfield store, and Kessler jumped at the opportunity. His new 5,000 square foot store includes many innovations, such as eco-friendly materials — from recycled windshield safety glass, to red lenses from old traffic lights. And the look jibes with Kessler’s desire to create a warm and welcoming retail environment that conveys staying power in the market.

In a city known for making cars, young Richard Kessler found he was spinning his wheels in his hometown of Detroit. At 27, he borrowed $700 from his father and simply started driving toward his new horizon — destination unknown. His journey was a brief one. He stopped in Milwaukee and decided this city was a good place to take root. With innate sales prowess, Kessler gave his then would-be employer a 30-day guarantee trial period. If the jeweler didn’t like Kessler’s work performance, he could fire the aspiring jeweler. As the story goes, Kessler impressed his boss so much he fired his brother-in-law to make room for Kessler.

When starting out, Kessler knew only the basics about jewelry. Namely, that rings went on fingers, earrings went on ears and so on. What he did know was sales and service, and quickly built a strong client base on these qualities. Ten months later, Kessler purchased a struggling little jewelry store in Menomonee Falls, WI with his friend Curt Franklin.

In 1980 they opened C. R. Gems. After two years, it became apparent that there wasn’t enough profit for the two men to support their families. Kessler decided to buy out his partner and spent the next nine years or so trying to make a go of it on his own. But growth was slow as Kessler tried to be like the other jewelers in town.

In 1991, Kessler went to a seminar by Anthony Robbins. The motivational speaker helped ratchet up Kessler’s confidence to invest in his true vision: to become a major diamond and engagement store in Southeastern Wisconsin. He became a quick study of diamonds and how other retailers sold them. He came up with Kesslers “Miraculous Warranty”, which warranties all jewelry products for life, and also redesigned his Menomonee Falls store. These two changes helped build a loyal client base and expand the business.

In 1995, Kessler opened a second store in Greenfield, WI. And, in the spring of 2000, he opened his third store in Appleton. In 2002 he opened store number four in Brookfield, and last year opened his fifth store in Madison. Today, Kesslers Diamond Center is Wisconsin’s largest seller of diamonds and engagement jewelry. Kessler himself is the voice and personality in all of his store’s radio and television ads. He is the only stockholder, making him Wisconsin’s largest independent jeweler.

THE CONCEPT
The Final Frontier

Four years after opening the Greenfield location, Kessler and his staff had outgrown the 900 square foot sales floor, reaching $5 million in sales in 1999. In the post-millennium years, various redesigns ushered in more display cases while making better use of available space, but these measures were only buying time. Kessler was willing to make such investments to remain at the location just off a busy street close to Southridge Mall, the largest shopping mall of its kind in Wisconsin.

In 2004, a developer bought the land across the street. He razed the structures on the land, then built two new buildings. Kessler leased the 5,000 square foot building in late 2004. As the ink was drying, Kessler and his staff immediately went to work on the planning phases of transforming a conventional rectangular building into a jewelry store that was consistent with Kesslers’ “sit-down” buying experience “in an inviting retail atmosphere that not only conveys warmth and welcome, but also suggests staying power in the market with solid and high quality materials,” says Kesslers VP Bill Aberman.

One of the biggest challenges from the outset was working with a long, narrow structure that was built to fit a similarly shaped lot. Kesslers called on retail design expert Lyn Falk from Retail Works, Inc. Says Aberman: “She’s known for using recycled and renewable materials, which create interesting surfaces and textures and bring a unique palette of colors to our retail environment.”

To avoid the “bowling alley” feel that comes from a long and narrow retail space, Falk created different departments to break up the linear space. Carpet patterns and large carpet shapes, complemented by similarly-shaped ceiling features, set off certain departments, as did semi-circle walls and step-down terrace style ceiling heights that vary throughout the store.

As a renter, Kessler didn’t have much say in how the developer chose to construct the basic shell of the building. Though the glass and brick exterior is unassuming, the two-story large windows allow for east-facing natural light, ideal for viewing jewelry in the morning hours. When creating the interior design in the two-story structure, Kessler opted to not split the building into two floors. By utilizing the floor to ceiling space, ceiling heights vary from 25 feet to 9 feet.

Using two stories also allowed for a large vestibule area to welcome customers — an important touch for anyone who has had to endure Wisconsin’s famously schizophrenic weather. When customers enter Kesslers, they are immediately greeted by Falk’s penchant for the exotic. Bamboo planks that measure 4” to 5” wide are used over wood floors.

Regular mill carpets in weaves tighter than Berber come in mainly straw, beige and brown colors. Sweeping curve patterns and shapes help define departments throughout the store and complement the green, dark gray and yellow tiles used in the store.

Each pedestal has unique features that allow Falk’s use of recyclable and renewable materials to shine through. And, each pedestal is crowned with a top made from concrete mixed with recycled glass bits — like the red glass from old traffic lights — for added color and texture.

Kesslers wouldn’t dare use ceiling tiles to tell a story like this. All ceilings are drywall with circular soffits everywhere. Ceiling features over display cases have built-in metal halide lights. One big lighting change from previous stores was switching to fiber optic lighting in the display cases. “This really makes a noticeable difference in our diamond display cases,” says Aberman.

THE TECHNOLOGY
The Digital Age

In the age of digital imagery, Kesslers uses a camera and light box to create a digital library of their inventory. This not only helps with inventory management, but also is incorporated in the store’s “Information Station”. Located in the middle of the sales floor, the station has a touch-screen computer that allows customers to quickly browse the store’s inventory. More computer-literate customers can actually make personalized folders to include wish list items. Around the Information Station is a short curved wall covered in a truly unique material — ground auto-windshield safety glass.

While customers are most frequently contacted by telephone, emails are catching up. The digital image library of the store’s inventory is also useful when sending emails to clients. “And, we find using email to be much better than playing phone tag,” says Aberman.

The plasma televisions throughout the store continuously play Kesslers’ profile, produced by a local media group. Storeowner Kessler is the voice of his company’s radio campaigns. (Throughout the store are humorous posters featuring famous couples, from the stone-faced American Gothic pair to the gruesome twosome from the 1935 classic “Bride of Frankenstein,” Boris Karloff and Yvonne DeCarlo, with the slogan, “He was their jeweler, now he wants to be yours.”)

Kesslers’ five stores share more than a name — they also share a network where inventory can be checked. A single main server houses information for the entire company, plus each store has its own server and a LAN that also provides Internet access for the sales floor’s eight terminals.

Kesslers promotes team spirit, from the company’s courier on up to top management. In recent years, Kessler adopted an open-book management system so that employees would always know the store’s operations and financial state. (See Instore, “Best of the Best”, September 2005.) To encourage participation in the system, Kessler even trained employees how to read and interpret financial statements that are open for review each month.

“Our people know how a business works, and consequently, they have helped us make many good business decisions,” says Kessler. The employees also have a stake in the results, through the company’s growth-sharing plan.

Kessler prides himself on his rigorous in-house training program. A new hire can go through one month of cursory store training plus another month or longer of a mentoring program. The training stems from a hiring policy that some in the industry may find unique. “We don’t hire many people with prior sales or [gem and jewelry] industry or retail experience,” says Aberman. “It’s more important that we hire staff who are good ‘people persons’, those who know how to care for the customer. These are the core values we look for. Teaching them about gems and jewelry is the easy part.” It works — there is almost zero turnover.

CONCLUSION
Secret of His Success

Kessler built his business from a mere $700 to revenues in excess of $22 million annually by using some very simple principles. He says, “It’s the same stuff your mom tried to teach you in the sand box: treat others the way you want to be treated.” Not good advice if you’re a masochist. His team developed a Core Values Statement that simply reads, “We want to build lifelong relationships with our Vendors, Clients and Employees by treating them the way we want to be treated.” Says Kessler: “It sounds easy until you try to live it every day. It’s a real test when things don’t go your way.” 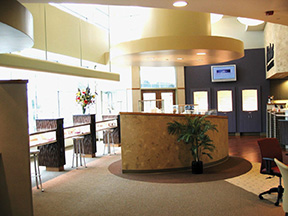 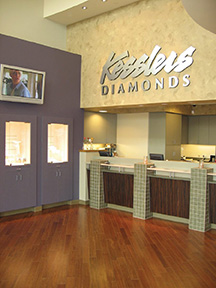 Related Topics: jewelry stores in WisconsinKesslers Diamond Center
click to Comment(Comment)
Up Next

I Was an Overnight Sensation In a World That Reveres Pedigree