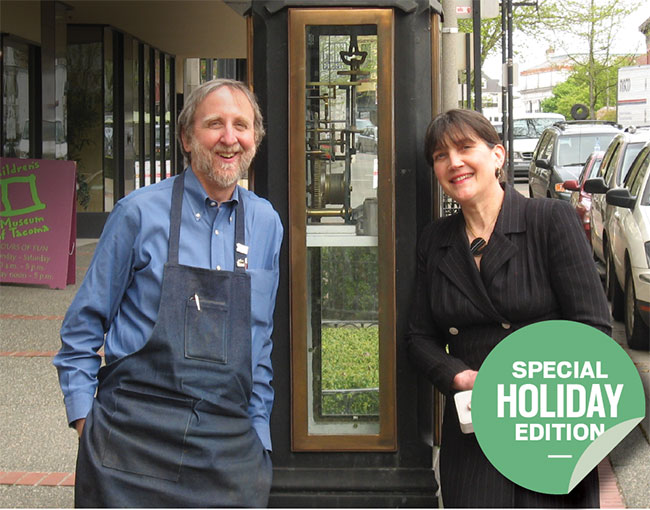 Steph Farber with his wife and co-owner, Phyllis Harrison

This article originally appeared in the December 2015 edition of INSTORE.

Steph Farber and Phyllis Harrison’s gallery, The Art Stop & LeRoy Jewelers, lies in the heart of Tacoma, WA, directly, as Steph says, in “a serious rain shadow of the Seattle media market.”

The market has no television stations of its own — and not even a real radio station to speak of. There’s only a noble, yet shrinking, local daily newspaper that — social media aside— is this community’s prime outlet for information. Savvy artists and entrepreneurs, Steph and Phyllis have made friends with a number of the paper’s writers and have, over the years, given them stories about their own successes as well as leads on other emerging issues in the city.

2014’s winner received a pendant with a marquise-cut Brazilian aquamarine designed to symbolize her love of water.

“When we won our first Spectrum Award, we contacted our friends in the general news department as well as the business section. In response, we got a small, 1-inch note in the ‘News we found out but didn’t think you wanted to know anything about’ column. At least that is what it looked like to us. When we won the Palladium Innovation Award the next year, we sent the information to the newspaper with much lowered expectations,” Steph says. Their expectations were met. Absolutely nothing was printed.

Not wanting to let the awards die a quiet death, Steph and Phyllis devised a way to get the word out without seeming to boast. For their 2012 holiday party, they devised a contest.

“Saying that we had been thrilled to win two national jewelry design awards in a row, we realized just how good it felt to have recognition for what we did.” Steph says. “We started thinking about others in our community who had done great things, but had not gotten their due recognition.”

Steph and Phyllis asked their clients and friends to nominate people who had done remarkable things — asking for anything from Nobel Prizes to perfect attendance pins in elementary school. They planned to pick the top nominees themselves, and to have the winner chosen by a secret ballot of those attending their holiday party in early December. They would then celebrate the winner by creating a piece of jewelry, which would tell that person’s story.

The contest attracted a number of nominations, including a man who had won a “Most Freckles” competition as a child. Yet, one of the nominations also highlighted the struggle of John McCluskey and Rudy Henry, a couple in their 70s who had been together for 40 years and who had worked tirelessly for legalization of same-sex marriage in the state of Washington. The couple was chosen as the first “Most Prized Client” winner by a large margin.

Then, on Dec. 6, 2012, the Washington state marriage equality statute went into effect. When McCluskey and Henry learned they had won, they said their simple, gold bands from the store best told their story. They were married with those rings, a gift from the store, the week after the party, in the first legal same-sex union in Tacoma. An Art Stop & LeRoy Jewelers’ annual tradition was born.

In 2013 the winning nominee was Pat Flynn, the woman who had been the driving force behind the American Cancer Society’s Relay for Life for 27 years. Pat is known as the Mother of Relay. She had been heralded and celebrated everywhere — everywhere but in her hometown.

The pendant Steph created to tell Pat’s story began with elements from the Relay for Life logo, featuring the sun, the moon and stars. As a nod to Pat’s taking the project from Tacoma into the world, he scattered the brilliance of the stars out beyond the bounds of the piece. He also added an amethyst, because “she loves purple!”

The store’s Most Prized Client of 2014 was Reynette Magaoay, an employee at the Pierce County auditor’s office who also helps feed the homeless in Tacoma.

Every week, she volunteers her time, finds additional volunteers, raises money to purchase food, and cooks a full-course dinner for the city’s homeless. She prepares and serves the meal in a bare-bones, empty building that’s little more than a roof over diners’ heads.
The “Farberwear” (as Phyllis calls it) creation that will tell Reynette’s story features a spectacular, marquise-cut Brazilian aquamarine. Reynette was born and raised in Hawaii, and she is an avid member of a local Hawaiian outrigger canoe club. Steph and Phyllis will present the finished creation to Reynette at this year’s party.

“The aquamarine speaks to Reynette’s connection with water, the source of life for all of us,” Phyllis says, “and the shape is reminiscent of the canoes she loves to paddle”.

Through their now-annual Most Prized Client contest, Steph Farber and Phyllis Harrison have turned a lack of local recognition for their own achievements into something that celebrates deserving people in their community.
“If the celebration of others showcases our own ability to make beautiful, personal jewelry, who are we to complain?” Steph says.

Real Deal: The Case of the Pawn Receipts

Real Deal: The Case of the Family Feud