Social media gave everyone a bullhorn … which is a problem
when an employee uses it to disparage a client.

This article originally appeared in the October 2015 edition of INSTORE. 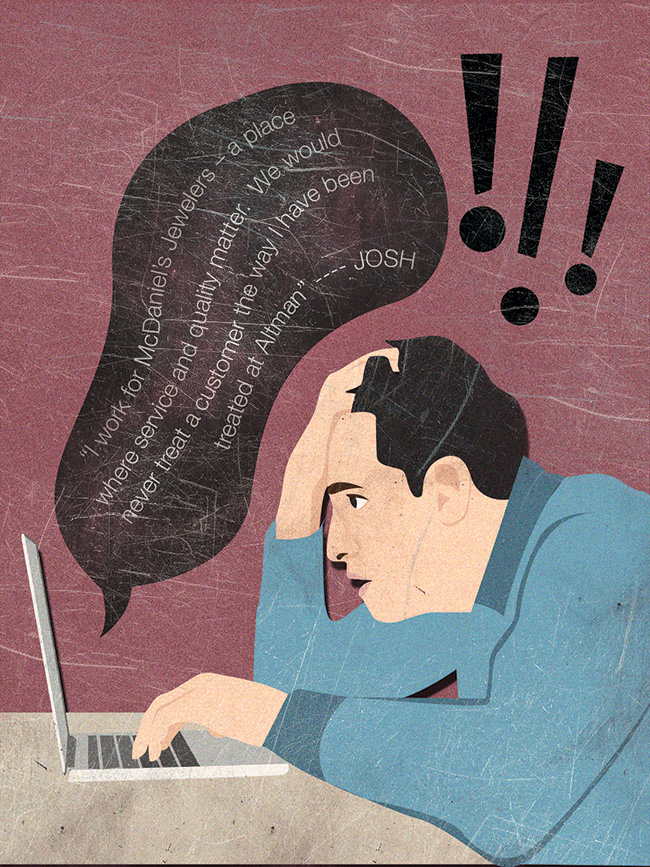 It took Kerry McDaniel years to get his head around this whole social media thing. Ultimately, he settled on what he believed to be a happy compromise — sticking with his evolving website and traditional marketing plan while allocating 10 hours per week for his young and social-media-literate salesperson Josh to stay on top of the store’s Facebook posts and tweets.

From what he’d read, Kerry knew he couldn’t keep associates from listing McDaniel’s as their place of employment in their personal profiles, but he could ask that if they did, they keep their pages and feeds clean, mature and reasonable. As part of his social media policy, he also asked that he personally approve any content that referenced his business before it was put out there. He requested that they only post or tweet things they would be comfortable with their mother — or their best client — seeing.

Real Deal scenarios are inspired by true stories, but are changed to sharpen the dilemmas involved. The names of the characters and stores have been changed and should not be confused with real people or places.

Kerry knew from his attorney that for the most part, his requests were just that and that he was relying on the maturity of his employees to secure compliance. Fortunately, in the years since he implemented his policy, he’d not had a single problem in that arena.

It was Kerry’s 23-year-old daughter who turned him on to the value of online reviews. When she handed him a f older of print copies of McDaniel’s online reviews from several sources, he was pleased to see that with two minor exceptions, McDaniel’s was a 5-star hit.
That Saturday, Kerry brought the folder to the weekly sales team meeting. He thanked his associates for the way they were all representing themselves as McDaniel’s employees online and then read some of the reviews to the team, surprising them by handing a new $20 bill to each associate who was mentioned by name in a review.

The team then discussed strategies and techniques for gently encouraging happy clients to post reviews, and Kerry talked about the importance of ensuring that only he handled any responses — to positive or negative comments.

An hour after opening the next Monday, Kerry got a call from Ron Altman, the owner of six local car dealerships and McDaniel’s biggest-spending customer. (In the previous year, Ron’s purchases had generated $170,000 in gross profit for McDaniel’s.) Ron started the conversation by calmly asking Kerry to go to Yelp and look at the review page for Altman Honda. He pointed out that, at the top a was a no-star rant claiming that Altman sold an inferior product, and that their service department was staffed with incompetent and rude people just looking to gouge customers for unnecessary repairs.

Ron became increasingly angry as he read from the review, “I work for McDaniel’s Jewelers — a place where service and quality matter. We would never treat a customer the way I have been treated at Altman.” Kerry’s heart sank when he saw the review was posted by Josh.

Ron explained that the incident that prompted Josh’s dissatisfaction involved damage that was done to his car when he and a buddy tried to “customize” his 2-year-old Civic, voiding the warranty and creating the need for a costly repair. He said Josh was belligerent and nasty to his service manager, and that, after 10 minutes of making an ugly scene, Josh was asked to leave.

Ron asked how Kerry could employ someone so immature and vindictive and essentially said that if Josh were not fired, he would no longer do business with McDaniel’s. Kerry understood that simply taking down the review and issuing an apology would not be enough.

Josh had been with him for four years and was, by all standards, a great employee. He consistently beat his sales goals, completed all of his assignments on time, was never late and got along well with everyone. Customers loved him.

Kerry had read about the dangers of trying to restrict employees’ free speech in a seminar he attended — but he did not want to lose Ron Altman’s business.

➤ What are Kerry’s options?

➤ Does he have legal ground to fire Josh?

➤ Is there a way to keep Ron’s business?

Josh must take down the bad review of Altman’s. From there, Josh must apologize to Ron Altman, in person at his place of business, taking all the blame unto himself for the misguided review. Kerry should be there too. If these two things happen, then my guess is that Ron will soften and not insist Josh be fired. Third, Josh has to have the lecture from Kerry on being a professional, and not letting your emotions lead to bad judgment. Welcome to reality, Josh! No longer can we act with impunity in the Internet era.

It is obvious to me that, as difficult as it would be, Josh must go. If this scenario actually occured, then the annual $170,000 profit from this client far outweighs possibly allowing Josh to taint the business image to this extent.

His total disregard of the best interests of his employer and company is the reason I would tell Josh, “You’re fired.”

This is a lose-lose situation. If Kerry keeps Josh he stands to lose a huge chunk of his business. But if Kerry fires Josh, which I believe he has a right to do (since he specifically ignored what Kerry had asked all the employees to do), he can expect to get trashed on social media because if Josh can post what he did about the car place, you can be assured he will post similar stuff all over Kerry’s sites.

Kerry should hold a staff meeting about responsible uses of social media, with more training on using it to cultivate business rather than potentially hurt business.

If you have a real issue with the way someone is doing business wouldn’t you just go to the owner and talk to him/her personally? Send him packing, Kerry!

The best play may be to try and appease Ron and still keep Josh, while using the incident to teach the staff. Or Josh may have to go to emphasize the (seriousness of the) incident to the rest of the staff as much as to keep Ron as a customer. If Josh has to go, I would not only make it clear to current staff why, but also write up the story, put it into the employee manual and train on it several times a year, to make sure it was never repeated by any staff member.

Kerry is caught between a rock and a hard place. Firing Josh sounds better and better.

A serious breach of trust by Josh has to be addressed. First, a retraction by the offender, then termination, done in a staff meeting, reinforcing your policy, that social media can’t be used for personal gain or to the detriment of the business model you hold dear.