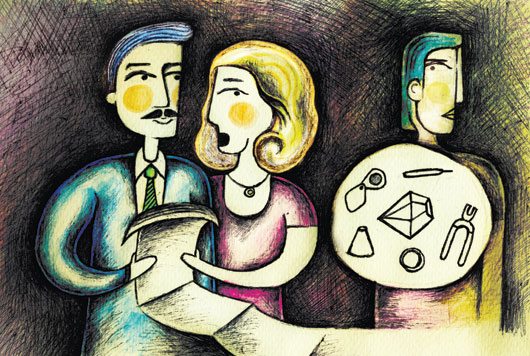 [dropcap cap=R]ay Beckett was proud of all he and his wife Gina had built in just 20 years. With little more than Ray’s bench experience and a dream, they’d opened a small business in the middle of nowhere and grew it into one of the most successful and respected fine jewelry stores in the industry.[/dropcap]

Growing up in his father’s store, Ray saw firsthand the value of integrity, hard work and quality. He began his bench training as a teenager, and continued his work as a craftsman even after earning his Graduate Gemologist diploma from GIA in 1981. When he and Gina married that same year, the narrow gold band he gave her matched her ¼-carat solitaire engagement ring ? and his young bench jeweler’s salary ? perfectly. Eight years and three kids later, careful planning, a herculean effort and a total commitment to their shared goals and values had Ray and Gina opening the doors of Beckett & Co. in the small but growing crossroads town in the desert Southwest where they’d both lived as children. The store, offering the local community fine quality brands, extraordinary craftsmanship and exceptional service, was an immediate success. Two years after their opening, on their tenth wedding anniversary, Ray replaced Gina’s ¼-carat solitaire with a 1-carat MQ diamond in a simple, elegant setting.

Over the next several years, working side by side nearly every day, Ray and Gina saw their small town — and their business — grow to epic proportions. In 1996, just five short years after opening their doors, Ray and Gina moved into their new location — the custom-built store of their dreams — several miles from their original spot. In celebration, Ray replaced Gina’s 1-carat MQ with what she had once called her “someday diamond” — a 3.54 carat MQ, in a mounting created by one of her favorite designers. Gina wore the ring with pride, and the designer’s line became one of the store’s best sellers.

As Beckett & Co’s business grew, Ray and Gina also grew as merchants. They knew that their continual evolution was driving their progress, and they recognized the importance of keeping one eye on current client interest and the other on emerging trends. At the invitation of an old friend, the Becketts made an appointment to look at a unique, limited distribution designer bridal line at a trade show late last January. Gina had admired the line in the past, intrigued by the appearance of “floating diamonds” in many of the mountings — but this was the first time she felt that the Beckett & Co customer might actually be ready for the more sophisticated look and the much higher price tag the line represented.

Much to everyone’s delight, the meeting was a huge success. The Becketts agreed to test the line with the introduction of a carefully planned trunk show to be held in early May, but more importantly, Gina was so taken by the beauty and quality of one style in particular that she and Ray asked the designer to create a special version of the ring to hold her 3.54 carat MQ. The designer agreed, and Gina left her diamond with him. Several days later, he provided the Becketts with a cost estimate of $8,950, less a 20 per cent “owners’ courtesy,” and a delivery commitment of six weeks or less. He requested that a 50 per cent deposit be sent to him along with a signed copy of his order authorization. While travel delays kept Ray from getting the deposit off for two weeks, he felt confident that, since the designer had Gina’s diamond and the signed authorization, the work would progress on schedule and that Gina would have her ring in time for their 28th anniversary in late March.

The March delivery deadline came and went. After numerous calls to check on the ring, Ray was finally able to reach his friend (the designer’s sales rep) on April 8. His friend told him that Gina’s ring was just about complete, with only final finishing steps to go ? and that it would be ready to ship the following week. Two days later, Ray received a fax from the designer’s office requesting a waiver of liability for setting Gina’s diamond ? something that was not discussed in any of their earlier conversations. Ray refused to sign the waiver, maintaining that the need for such a document should have been presented to him at the beginning of the process ? when he left his diamond with the designer. The designer refused to move forward on the completion of the ring without the signed release. Out of irritation with the delivery delay and what he saw as generally shoddy business practice, Ray asked that the designer accept responsibility for the setting or that he simply return Gina’s diamond, old mounting and his deposit.

After several days of back and forth debate, Ray’s confidence in the designer — and his willingness to present the line to his customers — had diminished greatly. He contacted the sales rep on April 15th to cancel the introductory trunk show. The rep told him that the designer needed to speak with him directly and would be calling him later that day. They continued to miss each other’s phone calls, so on April 22, the designer sent Ray an e-mail in which he said that on April 14, in an attempt to resolve the issue to Ray’s satisfaction, he turned the diamond over to his setter who unfortunately damaged it in the setting process. He stated that the damage was slight, and offered to pay for the repair.

Although the designer indicated that the damage occurred on April 14, Ray was convinced that it happened long before, and that it was the damage that prompted the request for a waiver. He asked that the designer submit the diamond to a mutually agreeable cutter for evaluation, and reiterated his expectation that in addition to paying for the repair of the diamond and any value lost, the designer return his old mounting and his deposit, voiding the order. The designer agreed to pay for the repair and to compensate for lost value, but refused to refund the Beckett’s deposit, insisting that since Ray commissioned the creation of the mounting, he was obligated to complete the transaction. Ray turned the matter over to his attorney, as did the designer.

Five months later, with the matter still unresolved after countless letters, faxes and e-mails, and with mounting legal bills, Ray and Gina considered their situation. The designer still had possession of their diamond, old mounting and $3850 deposit. Though the evaluation indicated that the weight loss due to the repair would be between .25 and .30 carats (about $1,500 in cost value), and though the designer agreed to that compensation, Gina just couldn’t see herself wearing the ring she’d once loved ? a bold, distinctive piece made by a designer she and Ray would never carry in their store. Ray had always believed that his business was built on trust ? on honest and honorable relationships ? but felt that in this case, he had been misled, taken advantage of and cheated.

[h3]The BIG questions: Who’s right? Should the Becketts have to pay for the high-cost piece they commissioned? Is it common, accepted practice for a designer to require a liability waiver before setting a diamond ? and since this designer did not, is simply paying for the repair and value loss enough?[/h3]

Editor’s Note: Real Deal Scenarios are inspired by true stories, but are changed to sharpen the dilemmas involved. The characters should not be confused with real people.

[span class=alert]To be eligible for publication in INSTORE, responses must include your name, store name, and the city and state in which your store is located. [/span]