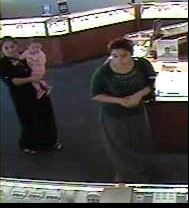 A surveillance camera image from a recent jewelry-store theft in Gilroy, CA. Photo courtesy of the Jewelers’ Security Alliance.

Gangs of thieves using distraction techniques appear to be targeting jewelry stores across the U.S., according to the Jewelers’ Security Alliance.

JSA recommends that sales associates guard against distraction thefts by showing only one item at a time and keeping all showcases locked except when actually taking merchandise out or returning it to the showcase.

Some characteristics often associated with distraction thefts, according to JSA:

Entering in groups of two, three, four or more, often with babies in arms or with multiple children in strollers.

Seeking to distract the sales associate with requests to wrap the items or place them in a box to be held until they return. At some point the thieves conceal items on their person to steal. They may attempt to place their hands in an open showcase.

Finding a reason to leave abruptly at the point of sale, such as not having enough cash or having only foreign money. The suspects then promise to return, holding out the prospect of a large future sale.

In Gilroy, CA, this month, two female suspects carrying an infant entered a jewelry store and asked to see multiple gold chains and rings, and selected several to purchase, JSA reports. The sales associate brought the items to the register area, and one of the suspects reportedly asked to cut the tags off the items and wrap them up in their own gift wrapping paper.

During the sale process the suspects asked if the store accepted euros. Since the store didn’t, the suspects stated that they would run to the bank to get their money converted to dollars.

After the suspects left the store, the wrapping paper was inspected and one $12,000 ring was missing, according to JSA.

The suspects reportedly spoke very good Spanish but used an unknown language with each other. They also spoke English.

One of the suspects carried a 1-year-old baby around the store and breast fed.

These Diamonds Are Completely Natural, But They Don’t Come from A Mine

‘Golden Age Of Small Business’ On the Way, Report Says

Do You Service Jewelry Bought Online? Jewelers Weigh In

Jewelers Shine a Light on Distinctive Fixtures in Stores