The Oscars may have ended on an unusual note, but the looks on the red carpet were decidedly tasteful and traditional. Serious diamond necklaces befitting a leading lady are back in favor, and dangling earrings, too. That’s not to say that the night’s looks were a snooze. As always, a few stars manage to distinguish themselves in the celebrity firmament. Keep reading to find out whose jewels stole the show. 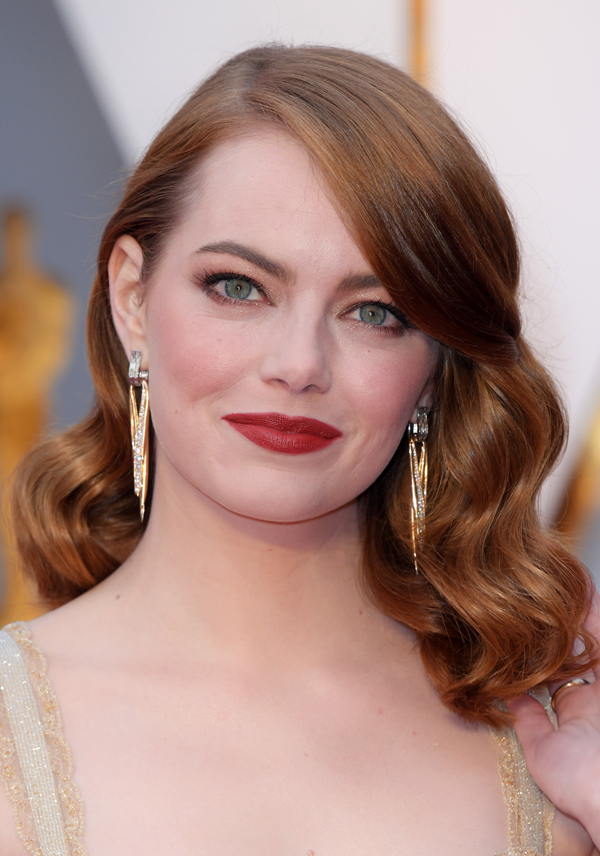 Young Hollywood stars often pile on jewelry in an effort to look sophisticated, or skip it altogether to avoid being overshadowed by blinding baubles. Emma Stone negotiated the middle ground effortlessly. Instead of wearing mammoth jewels befitting a grande dame, she selected Tiffany gold and diamond earrings with a light, contemporary touch and added a bit more sparkle with a pair of diamond rings (a three-carat fancy vivid yellow diamond and a white diamond band in platinum). Plus, she was one the few attendees in colored gold—a simple way to stand out from the crowd.

Major earrings and necklaces were the main event for Oscar night but Chopra didn’t get the memo and that’s a good thing. Yes, she flaunted 60-carats of diamonds in her Lorraine Schwartz earrings but the matched pair of natural lavender cuffs anchored her simple column dress. Their delicate color gave the substantial pieces a light, ethereal quality.

The Scandal actress brought a much needed boho touch to the altogether understated evening. Her Neil Lane chandelier earrings with diamonds, pearls, and turquoise brought haute hippie drama to the event. She gets extra points for knowing when to say when. Shoulder dusters don’t need extra jewelry to keep them company.

Holdouts who insist ear climbers are a fad for the millennial set should check out the style Viola Davis wore for her big win. Her lobe ascending earrings could never be mistaken for a teeny bopper trend. (Decidedly adult actress, Isabelle Huppert, has worn ear climbers throughout award season too.) Another nice touch—Davis combined color with color. Red carpet regulars typically wear bright dresses with diamonds. The sunny yellow color of her Niwaka earrings, ring and bracelet alongside her flaming Armani Privé dress struck a strong contrast in a sea of neutral dresses and jewelry.

Theron is a practiced hand at the Oscars red carpet and she knows how to deliver glamour that doesn’t look staid. What’s more, she seems to relish a signature big diamond moment like no one else. True to form, her Chopard jewelry was so major it was impossible not to give it its due. Her pendant earrings were asymmetrical and set in 18K Fairmined gold: one featured a 25-carat D-flawless pear-shaped diamond, the other a 26-carat heart-shaped D-flawless diamond. And (though you probably missed it) she also wore two diamond solitaires.

Men who need pointers on how to bring a little flair to their black tie game have a new role model in Pharrell Williams. His bow tie was draped with Chanel necklaces and his jacket sported a camellia brooch in 18K white gold, diamonds and cultured pearls. Cuff links and watches aren’t the only game in town anymore. Expect imitators at the next awards show.

A 6’2” supermodel is, by virtue of genetics, capable of wearing diamond chokers better than any other human on the planet. Karlee Kloss demonstrated her innate ability in a design from Nirav Modi decked with more than 38 carats, plus oversized diamond ear studs. The floral design of the necklace gave her austere white dress a soft flourish. Gwyneth Paltrow wore a similar cape + diamond combo a few years back and ended up on every best dressed list. The model has clearly been studying her Oscars fashion history.

Question: Does anyone enjoy the red carpet more than Taraji P. Henson? Answer: Not on your life. The actress shimmied, twirled and sashayed her way into the Dolby Theater like no one else. All that movement amplified the brilliance of her diamond Nirav Modi bib necklace. The neckline of her velvet Alberta Ferretti dress perfectly echoed the shape of the jewel and a hit of green from an emerald ring kept the look as light and effortless as Henson’s mood.

Loving actress Ruth Negga’s awards season run of quirky-chic looks—a little bedazzled Prada here, some safety-pinned Rodarte trousers there—has made her a fashion darling. She remained true to form with her Oscars attire, matching a red Valentino gown with Irene Neuwirth jewelry featuring Gemfields rubies. It was a risk to wear a headpiece—they have a tendency to look twee—but her crown of graduated stones looked eviably cool nestled in her dark cropped hair. Matching earrings were a finishing regal touch. A flash of blue from a ribbon Negga wore to show her support for the ACLU made a sharp visual and political statement.

When a red carpet reporter asked his opinion of wife Jessica Biel’s Oscar attire, Justin Timberlake remarked, “I call it perfection.” That summed up the uniformly ecstatic reception of her second skin metallic KaufmanFranco dress and 18K yellow gold and platinum necklace from Tiffany’s Blue Book Collection. Inspired by tropical vegetation, her collar featured 350 uniquely shaped gold fronds and 200 baguette diamonds. Biel’s stylist Mariel Haenn cleverly paired a strong necklace with an equally impressive dress of the same color; it ensured the jewelry didn’t steal the show and overwhelm the actress. She wasn’t nominated for a prize but won a place among the Oscars’ all-time best dressed.

Related Topics: celebrity jewelryOscarsTanya Dukes
click to Comment(Comment)
Up Next

IEG: OROAREZZO Is Postponed to 2022

If Your Marketing Seems Scattershot, Here’s How to Streamline Your Messaging