Instore tallies the votes and presents the country’s most innovative jewelers.

When we started our Cool Stores column back in Instore’s first issue, we had a feeling we were onto a good thing.

We already had an idea of the range and breadth of great store designs in the jewelry trade, and about the artistry and individuality that shines in so many stores around America. And, of course, jewelry store owners love to show off their progeny — for what is a jewelry store if it’s not “your baby”?

Last year’s contest picked out some real gems, and this year we have new judges from a variety of backgrounds. (See their profiles on page 31.) They have gone over the entrants with a fine tooth-comb before selecting what they deemed 2003’s Coolest Stores.

From hip little dens to sweeping up-market grandeur, our winners run the gamut of styles; and we’ve asked each store owner to share with you their golden piece of advice about making your store as ooh-inducing as theirs.

Our judges each used their own criteria to grade the stores, basing their judgements on photos of which were set up on a website, along with a store history and description. The stores themselves came from a variety of sources. Some were tracked down by Instore’s intrepid research team, while others were suggested by other industry members, and still others entered themselves in the competition. (By the way, you are always welcome to send your suggestions for future “Cool Stores” to us at [email protected]). Now the scores have been tallied, and we present you with the top 10 vote-getters … this year’s “America’s Coolest Stores.” — Kerri Anna Tyler

Location: 308 West State Street, Rockford, IL 61101
Phone: (815) 490-9400
Owners: Mark and Monika Clodius  |  Designers: Mark and Monika Clodius  |  Project cost: $25,000
Design advice: “First, try to find a vision … visit other jewelers and specialty shops, study back issues of Instore and see what other cool stores ‘speak’ to you. Second, you must have a budget. You can work wonders with paint, new lights, and new case interiors. We spent top dollar on our cases, but many of our interior accessories came from IKEA. Be active in thinking of alternative materials and fixtures.”

Jewelry designers Mark and Monika Clodius are a creative force to be reckoned with. The husband and wife duo already had a thriving jewelry store when they expanded into a coffee shop in a refurbished turn-of-the-century department store.

Mark and Monika were eager for their new store to reflect their belief in modernity and progress, yet wanted to stay true to the history of the location. The store has 18-foot high ceilings, and is fitted with distinctive custom-built wood display cases that Mark designed himself. (The design is now copyrighted, and the cabinets are shortly going into limited distribution.) The couple decided that no one else could fulfil their aesthetic ideal, and undertook the layout, color, carpeting, lighting, and décor alone, calling on an interior designer to help with textural choices and color matching.

They even got their hands dirty, doing much of the “grunt work” themselves.

The finished product has a rich array of colors, including an amethyst ceiling, pistachio walls and an almond-colored carpet. Texture comes from luxurious wall hangings, and the limestone and arched windows, retained from the original building, prove a marked contrast to the state-of-the-art computer station installed in the sales area. Security had to be beefed up from that in the space’s old incarnation as a coffee shop, but a lingering flavor of the old place remains in the shape of the old dishwasher; it’s been converted into what Mark and Monika call “the world’s smallest production shop.” They now plan to open another store, and recently bought a freestanding old bank in the center of town. Mark plans “a similar look to our current store, but with greatly expanded customer care area, beverage and cookie station, more display space, and greatly expanded shop and office areas.” They even plan on an indoor fountain.

Four of the judges awarded very high marks to Clodius and Co. Brett Weiler says, “I really liked the overall feel of the store, from the cases to the colors.” Ever the curious craftsman, Brett loves the on-show aspect of the workshop: “I like being able to see a store’s shop. However, this shop is in the store, and that is a vote-buster.” The store’s progressive ethos wins over Fred Michmershuizen, who says, “This is a store of the future. It gets a perfect 10 for originality. Those display cases with their oval windows scream: ‘Look inside me!’” RoxAnna Sway has nothing but praise for the store’s design. “Graphic and bold contemporary design, distinctive features and artistic touches communicate sophisticated taste and a unique brand message,” she reckons. Debbie Yonick, too, raves about Mark and Monika’s baby, saying, “I especially love the buttery leather couch that would make me say, ‘Bring on the jewelry, honey, I’ll be over here!’” Penny Palmer is the lone voice of dissent. While she agrees that the store is “Very original, very unique,” she also thinks that it is “in some ways too modern,” and says of in-store bench area, “It looks awful.” 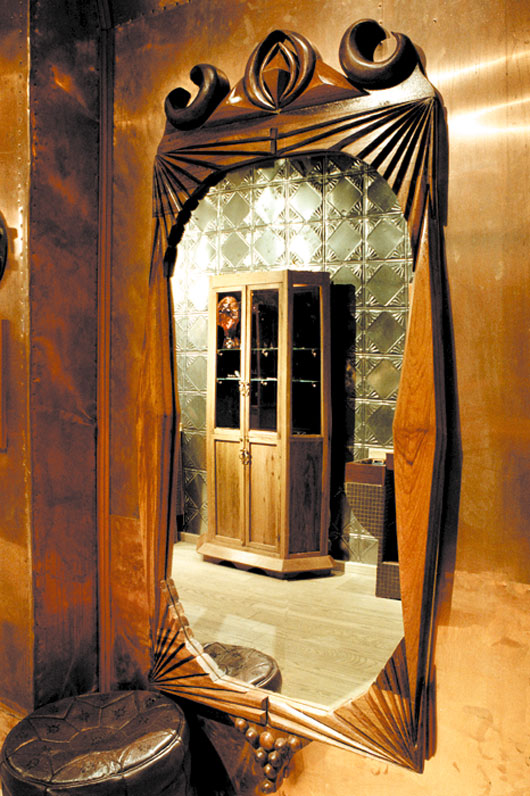 Location: 240 Mulberry Street, New York NY 10012
Phone: (212) 965-9699
Owners: Karen Karch  |  Designers: Karen Karch and Frank Ford  |  Project cost: “We spent a couple hundred thousand on [our last] renovation.”
Design advice: “As I develop new collections, we try make our displays communicate a fresh point of view. We watch and listen to our customers closely and anticipate how to continue to captivate them, then make our moves. Even though it’s always been from the gut, we’ve never done anything that we regret.”

Karen Karch first began designing jewelry in 1987, before studying metals in New York, and she started selling jewelry to Barney’s and Fred Segal in 1989. But she always knew she would one day open her own shop, where she could showcase her ornate, distinctively modern work. Hence, the birth — in 1996 — of Push.

Located in the NoLiTa district (North of Little Italy), Push was part of a retail renaissance in an area where, previously, customers had been more likely to pick up a cream cheese bagel than a white gold bangle. Before that, the area had an even worse reputation; a store just down the street from Push had been an infamous Mafia joint which played host to Lucky Luciano and John Gotti. These days the area is no longer violent, but vibrant, with bright independent boutiques, avant-garde craft galleries, and cozy cafes.

Push itself has a history reaching back over a hundred years. It was originally a funeral parlor, and later, in its next incarnation as a deli, it’s said to have hosted to a poker game attended by James Dean.

Karen, who helped actor Ethan Hawke design wife Uma Thurman’s engagement ring, wanted to make the space appeal to those who wouldn’t normally shop in fine jewelry establishments. The store’s 110-year-old wooden façade was carefully restored by her husband, as Karen wanted to keep the spirit of the old building intact . The interior is filled with surprises, including pressed metals, exotic woods, head-turning displays, and two newly designed chandeliers. The startling cabinetry was crafted by interior/furniture designer Frank Ford, and sculptures by artist Rebecca Chamberlain help to make the store a small-scale panorama.

The panel were split four-to-one on this winner. Penny Palmer doesn’t mince her superlatives, raving, “Extremely beautiful, awesome.” But, like other panel members, she wonders about the wares themselves in the pictures she saw, asking, “Where’s the jewelry?” Brett, too, wishes he could have seen more. “I liked the mixed medium eclecticism,” he says. “But it is difficult to get a feel for the store as a whole.” RoxAnna Sway is in no doubt about Push’s status: “Truly the coolest store!” She declares Karen Karch’s pride and joy, “Way cool! A great one-of-a-kind design.” Debbie shares with Brett an appreciation of the mixed materials used, and says, “This gallery is another stop for me next time I’m in New York. I want to live in a place like this!” Fred Michmershuizen marks Push further down than the other panel members, musing, “This store looks rather intimidating. And where’s the jewelry? It doesn’t look accessible, rather like it’s in a museum to be looked at, not worn.”

But he relents, adding, “Perhaps my negative reaction is due to the limited number of photos from this store. It does look beautiful inside.”

This story is from the August 2003 edition of INSTORE