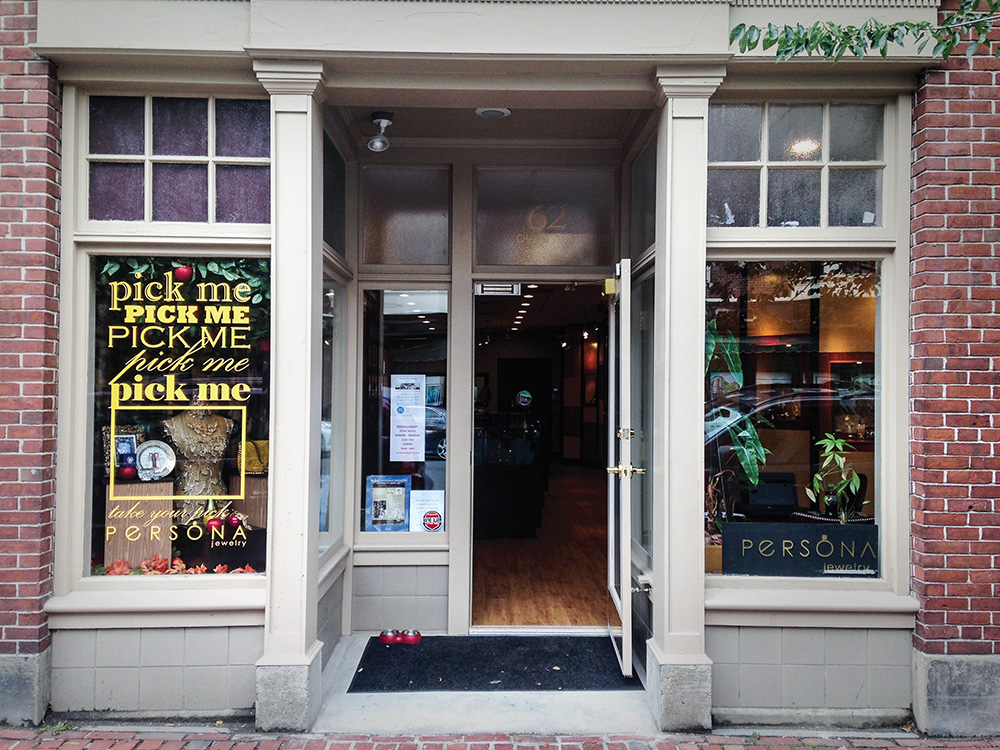 A Boston store with hotel-boutique roots builds on a reputation for approachability.

HOW DOES A SMALL boutique jeweler become the go-to jewelry source for a dozen New England Patriots? Start with the rookies, and treat them as you would the superstars.

Years ago, a young man came into Persona Jewelry+ to buy his girlfriend earrings. Turns out, he was a newly recruited, unsigned player for their favorite football team. A couple months later, he came back for an engagement ring. Shteyman recalls how the big guy’s hand shook as he wrote the check for about $12,000. “That was a lot of money for a man in his early 20s with no guarantee of employment,” Druker points out.

It’s not much to him now. A well-known player pulling down an impressive salary, he has become a loyal customer and friend, and introduced quite a few Patriots to the store. Their patronage helped support last year’s move to new digs in Boston’s Beacon Hill.

It’s not easy scoring retail space on Charles Street, main drag of this wealthy, historic neighborhood. Shteyman and Druker found themselves losing out to a bank with more to spend on rent. But the neighbors went “up in arms,” Druker says, and insisted on a locally owned business. That the neighborhood jeweler had retired a dozen years back made the couple a perfect fit for the area.

Their typical mix works well in this quaint, gas-lit shopping district — 75 percent jewelry, all handmade, with an emphasis on local designers and prices ranging from $20 to $200,000. Along with custom-designed wedding rings, Shteyman specializes in rehabilitation of vintage or unworn jewelry.

Persona began as a small shop in Boston’s Hotel Commonwealth in 2004, run by a goldsmith and his young bride. “We were clueless!” Margarita Druker says now. “I was a 23-year-old girl who had never run a business.”

Even so, growth was rapid. Between 2005 and 2012 Persona opened three more stores in Boston, and a small chain of luxury hotel boutiques, from the Four Seasons in San Francisco to the Pierre in NYC. “It was nice, but the economy had changed and we felt like we couldn’t provide the experience we were used to providing, being so spread out,” Druker says. “Also, it was a bit much to manage cross-country, even cross-city. So, we started to downsize.” They have since concentrated all of their energy on a single location.

Looking around the sleek new store, with its wavy modular walls inset with staggered jewel-box cases, it’s impressive to find they built out the space in three weeks, modifying all the original cases and millwork. The entire family pitched in to help build the new store. Their fathers took time off work and put on construction boots, and Gary’s cousin helped install the HVAC system to bring down the cost. Total cost of the new store build-out was $30,000, compared to $300,000 for their first store. (Among other rookie mistakes, they paid a contractor $25,000 upfront, only to have him dissolve his company before he even began the work.)

“We started on a mom-and-pop budget,” she says — literally, as in their parents remortgaged their homes. “It was a dream with no real money behind it.” This made those early mistakes harder to bear.

This time, a tight rein was kept on expenses.

Every inch of floor space was utilized in the new store by architect Alan Mayer of Mayer & Associates. A walkway that once collected empty boxes became a curtained-off corner for private consultations. A 6-by-6-foot section of stockroom was transformed into an in-house photography studio.

“Our rebuilding was minimal,” Druker says. “You live and learn.”

“We wanted our store to have a unique look, but we also wanted it to be approachable. That was very important to us,” Druker says,

“I’ll never forget going into Tiffany’s when I was 20 and shopping for a wedding ring. I wanted Gary to make my ring but I wanted to try on some of their eternity bands.” The saleswoman waved her on to “something more affordable.”

Druker resolved never to do that to her own customers. “If someone comes in for a watch battery, he or she gets the same service as someone buying expensive jewelry,” she says. “We’re friends with our clients. We remember their names, birthdays, anniversaries, kids and grandkids. It’s important.

“Gary and I started the business when I was 23 and he was 30,” Druker says. “That’s young to be running a jewelry store and trying to work with sophisticated clients. But people felt a level of comfort with us, especially young men getting engaged.” A decade later, in the heart of Beacon Hill, they’re doing their best to maintain that spirit.

1. UNEXPECTED FLOOR SHOW. Once they got approval from the architectural board to move into their historic Beacon Hill location, the owners had three weeks to pack, move and reopen. Needless to say, the process took place at warp speed. “The amusement of the neighbors’ faces, watching this through our window, was priceless,” says Druker.

2. UNOFFICIAL NFL JEWELER. A chance encounter at a fashion show with a New England Patriots rookie led to the sale of an engagement ring — and then a dozen more to fellow players, and a few NFL-inspired pieces. Persona is now the unofficial jeweler for the team.

3. HANDS-ON ENGAGEMENT RINGS. Would-be grooms are invited to participate in producing their rings, from initial sketch and wax carving to DIY filing and final polish. “It gives young men an opportunity to feel they not only played a part in the design but also put something in it,” Druker says. “It’s such a special moment in their lives. Many clients come in with CAD drawings now.”

4. DIAMONDS 101. Gary Shteyman’s free hour-long “Diamond 101” class nets the store a dozen weekly appointments and a 75 percent customer retention rate. Classes are held behind a curtain in a display corner that doubles as a plush seating area and invitation-only gem showcase. A flat-screen TV shows past custom designs. Nice use of an area that once served as “a dumping ground for UPS boxes and coats,” Druker says.

Offer free cleanings every three to six months. “It encourages long-term relationships,” Druker says. “If a sale happens too — bonus!”

Related Topics: jewelry stores in MassachusettsPersona Jewelry+
click to Comment(Comment)
Up Next

Twin Jewelers Are Standing Tall in Their Oregon Community