[dropcap cap=H]ere’s one store that has found a way to make the dog days of summer howl. The annual summertime customer-appreciation event at James & Sons has not only given the four-store jewelry chain nearly $800,000 in sales in a single day, it has also changed the way the jeweler does business throughout the rest of the year.[/dropcap] 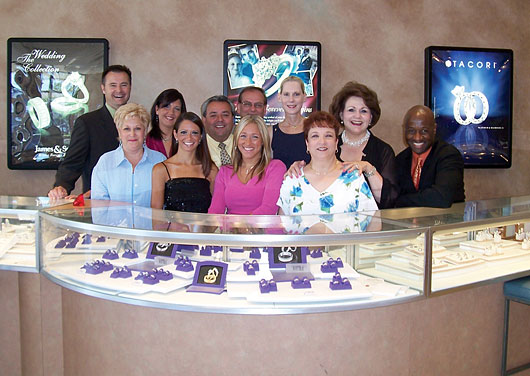 How did this killer event come into being? Faced with cash flow issues during the slow summer months, James & Sons Chief Financial Officer J. Ford Sunderland decided to tackle the issue with a customer appreciation event from ExSellerate, a retail events planning and retail consulting firm headed by Terry Sisco.

When Sisco approached James & Sons in 2003 about hosting the event, company leaders liked what they heard and decided to take a shot at it. Their goal for the first event, held on August 2, 2003, was simply to beat their previous record for single-day sales — $265,000 — set during the Christmas selling season of 1999 (combined sales of all four stores). In the end, that record tally was more than doubled — with $575,000 in sales made to the 400-plus customers who attended the inaugural event.

Even more amazingly, considering the results, the event wasn’t advertised. Instead, James & Sons conducted an intensive six-week program of telephone outreach. To execute this program, the company had to overhaul its existing database — which had been used for direct mail, but never before for telephone outreach.

In 2003, the database was in tough shape, according to Sisco. More than 25% percent of the names had to be deleted, many customers were “orphaned” (had no assigned salesperson), and a slew of customer profiles contained scant or outdated data at best. Once the database issues were ironed out, thanks to a new user-friendly Net-based system, the smiling and dialing commenced.

“We had never called our customers [for an event] before,” says Sunderland. “So there was some resistance from the staff. In the first year, we had to use whips and chains. The second year, cattle prods. And this year, only mild arm-twisting was required.”

Increasing comfort helped, as well as the ever-better results. This year, James & Sons’ employees made over 10,000 phone calls that helped bring in about 850 people to the event.

The improvements to the store’s operations went far beyond simply overhauling the customer database. Even the way the sales team worked was dramatically affected. Team members were presented with hundreds of customer names to call, and automatically assumed “ownership” of every customer on that list. And, not just for the customer-appreciation event. Forever.

“The ownership concept goes beyond the success of the event,” says Sunderland. “It has changed the way the sales staff manages their customers and conducts sales, as well as the ways we inspect our expectations of the staff.”

After the inaugural customer appreciation event in 2003, sales associates have been expected to make a minimum of 10 customer calls a day. These could be for any reason — sales follow-ups, jewelry cleaning reminders, or a reminder about a gift-giving event coming up on the customer’s calendar. Doesn’t matter, as long as 10 calls are made per day.

“Most POS systems are great for managing inventories and finances but not customers,” Sisco says. “The beauty of the ExSellerate system is that it puts the customer information where it belongs — with the sales people.”

In addition to making the sales team more proactive, the Net-based system allows store managers to better track job performance — a valuable tool for staff meetings and employee reviews. Says Sunderland: “If sales people aren’t meeting their sales quotas, then we look at their call list and customer profiles. If calls aren’t being made and profiles aren’t updated, sales aren’t being made.”

Customer calls are helping to change the buying behavior of James & Sons’ customers, while creating a build-up of anticipation for the annual summer event. In its third year, the event has “taken a life of its own,” says Sunderland. “You can hear it [the excitement] in customers’ voices when we call about the event.”

In terms of presentation, the customer-appreciation event itself isn’t that much different than what many other jewelers are doing. Catered food, drinks, and basic decorations are all you’ll see.

Even Sunderland admits, “We don’t do much in the way of presentation.”

No, the main draw here is the jewelry values. James & Sons bills the event as the place to get “the best jewelry values of the year”. Says Sunderland, “For old inventory I don’t mind seeing walk out the door, I’ll discount it by 40%, whereas new pieces recently purchased at the June Vegas show that will be hot sellers at Christmas might be discounted around 10%.”

So, why is the event held in August? Well, Sunderland says the date was originally chosen as a challenge — both to his stores, and to ExSellerate, the consultant firm which he had then newly hired.

It’s a lofty but “definitely attainable” goal, says Sunderland. “To increase sales, we plan on expanding the inventory to more top-end jewelry. And, we’d like to increase the number of colored diamond pieces on offer at these events as there’s an increased interest in colored diamonds amongst consumers.”