[dropcap cap=E]very month, he examines his financial statement, showing the health of the company. Salaries, advertising expenses, credit lines … he pores over each and every one, looking for problems, brainstorming on where to improve. He knows that it’s his responsibility to ensure that sales go up, and expenses stay down. In fact, his compensation depends upon it. We must be talking about an owner or manager, right? Wrong. This is a brand-new employee at Kessler’s Diamond Center.[/dropcap]

Welcome to Kessler’s Diamond Center, where the entire operation is an open book to each and every employee. And when things go well, they share in the profits. Last year, $150,000 was split between 60 employees —not including owner Richard Kessler. “I’m just happy the business is growing,” says Kessler, who put the open-book management and profit-sharing system in place five years ago. He got the idea from Great Game of Business, by Jack Stack, which urged business owners to take employee empowerment one step further. Stack said that if you can get the information to your employees and explain how the business is run, they can conduct themselves like business owners.

“Most employees think the owner makes like $16 million a year,” says Kessler. “So I decided to show them where all the money goes.” Staff members were shocked … but not exactly for the reasons Kessler expected. “They couldn’t believe we were wasting so much money on this and that!” he laughs. Soon after, one employee called the security company and demanded to know why Kesslers wasn’t getting the same rates for each store in the four-store operation. “He got the firm to give us uniform rates across the board, saving us hundreds of dollars a year,” says Kessler. Another employee accomplished a similar feat with the phone company. “With profit-sharing in place, they know they’re saving their own money,” he says.

Under Kesslers’ profit-sharing plan, any profit over and above the previous year’s profit (with a minimum baseline of $1 million) is split: half goes to the company, and half goes to the employees. Each employee gets a percentage of that profit equal to his or her salary as a percentage of all salaries. So, if the company earned $1.25 million in profit, the employees would split $125,000. The following year, the minimum would be $1.125 million (since half went back to the company). If the goal is not met, the minimum profit needed drops back to $1 million. An employee must be employed as of March 1 of that fiscal year to be eligible for profit sharing. 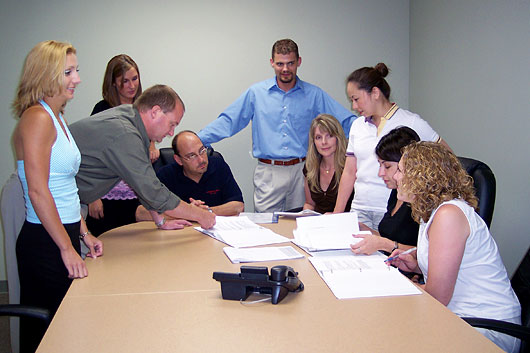 “We’ve only paid out in two of the five years since we began the plan,” says Kessler. In 2003, the company had some large expenses, so the profit goal wasn’t met. “The employees realize that my responsibility is to make wise investments so the company will grow,” he says — a belief that is supported by financial statements each month.

However, though Kessler may decide, for example, that a new store is needed, he leaves it to his employees to fit out the store. “We just built a store that cost over $900,000,” he says. “I didn’t choose a single color, not a single thread of carpet, not a solitary chair. They’re the ones that have to work in it every day, so they make the choices. How can they ever complain? They picked it!”

This trust and empowerment carries over into every aspect of the organization. Kessler sits down with every person that’s hired, explaining that he or she was chosen because they’re smart, and because Kessler needs them to make good business decisions. “I tell them that nine out of 10 times, they’re going to save us lots of money,” he says. “One time out of ten, I’ll lose money. But it’s okay … I expect them to make mistakes, as long as they learn and they abide by our principles.”

During an interview, held outside a recent industry trade show, Kessler points toward the buying floor. “I’ve got people in there buying inventory right now. They’ll spend over $1 million in three days. I have no idea what they’re buying,” he says. “They do their job so I can do mine.”

Kessler’s employees also participate in human resources decisions, interviewing every new employee prospect that comes in the door. “The person you hand your application to will interview you on the spot,” says Kessler. “That’s part of their job. If you pass that, they’ll give the application to the store manager. If he or she likes you, they’ll set up an appointment for you to meet the rest of the team. If you pass that, a vice-president will interview you, and then pass you on to the other store managers for a final interview.”

Quite a gauntlet, but it ensures that every hire fits the personality of the team, and shares its values.

More surprisingly, employees also have firing capabilities. “It just happened last week!” exclaims Kessler. “They told the person, ‘We can’t carry you anymore.’” Not even managers are immune. The employees of one store came to Kessler and said the manager needed to be fired — that he wasn’t treating customers right, or honoring the principles of the company. Sure enough, the manager was fired and the store took off.

“People want control of their lives,” says Kessler, who allows his employees to set their own schedules as long as they work 40 hours a week. “I have no idea what hours people work.” Employees are told that at least one person needs to be on hand throughout the day to answer the phones, then they sit down as a group and figure out who works when. Kessler says the employees need the balance in their lives — that they know the objectives of the store and how important they are, and they can determine the best way to meet them. “They want to know that once you teach them how to treat and serve the customer, that you’ll let them do their jobs without looking over their shoulders — that they can do the right thing and trust the company not to say, ‘what the hell did you do that for?’ ”

To give employees the greatest possible guidance, and latitude, Kesslers Diamond Center has two rules. First is to “do the right thing”, and make sure the customer is totally satisfied. Second, is to “have fun every day”. (Says Kessler: “You can’t serve customers if you’re not having a good time.”) Employees have an unusual degree of latitude to make sure customers leave happy, and they use it responsibly. Customers see this and keep coming back for more, which is evidenced in the group’s rapid growth.

Kessler is happy to deflect the credit for his company’s success to his employees.

“There’s so much brainpower in jewelry stores, but owners think they need to tell everyone what to do,” says Kessler. “Our company wouldn’t be where it is if I relied on my own brainpower … it’s too limited! Besides, I’m not that smart.”