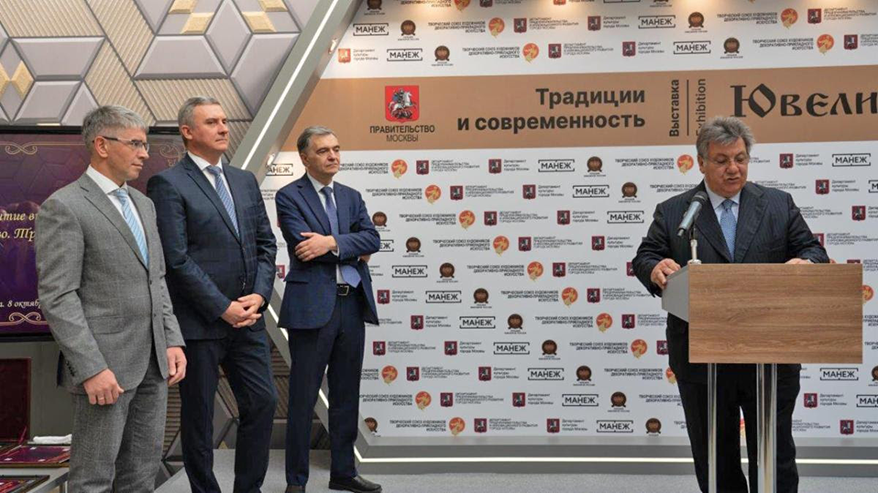 CIBJO President Gaetano Cavalieri speaking at the opening of the ‘The Art of Jewellery: Traditions and Trends’ exhibition in Moscow on October 8, 2019. He is accompanied on stage by (from left) Alexey Fursin, Head of the Moscow Department of Entrepreneurship and Innovative Development; Oleg Dukhovnitsky, Head of the Federal Agency of Communications; and Andrey Yurin, Head of the Gokhran of Russia.

(PRESS RELEASE) MILAN, ITALY — CIBJO President Gaetano Cavalieri has delivered two keynote addresses at the Russian state-sponsored “The Art of Jewellery: Traditions and Trends” exhibition in Moscow, during which he paid tribute to the country’s historic contribution to the jewelry tradition, and discussed the path forward for the country’s industry in the international markets.

The exhibition opened at the Moscow State Exhibition Hall “New Manege” on October 8, 2019, with Dr. Cavalieri delivering an opening speech along with Alexey Fursin, head of the Moscow Department of Entrepreneurship and Innovative Development. The event is being organized by the Gokhran of Russia with the support of the Moscow Government, and with participation of the Russian Jewellery Guild. It will run through October 20, 2019.

Video: How to Find a Good Manager for Your Jewelry Store

“Russia is a country with a long and proud tradition in the jewelry arts, where the products produced have reflected not only the talent and ingenuity of its designers and craftspeople, but also the culture and history of this great nation, and the deposits of precious minerals with which your country is so richly blessed,” Dr. Cavalieri said.

“Like all great art disciplines, fine jewelry artists learn and draw from the experience of those that have come before them, not only in their own countries, but from others as well,” Dr. Cavalieri continued.

“Arguably the most famous Russian jeweler of them all, Carl Fabergé, was an individual deeply invested in both the Russian and French cultural experiences. In our industry that as not a considered a drawback, but rather a strength.”

Providing both a retrospective of Russia’s jewelry heritage and look forward to its future, the exhibition features 220 unique masterpieces from the collection of the Gokhran, including works of Fabergé, Ovchinnikov, Khlebnikov that are being seen in public for the first time. In the modern jewelry section, works by more than 200 items of Russia’s best craftsmen are presented. These include creations by the winners of the Russia 21st Century Jewellery Art Competition, which was organized by the Gokhran with the support of the Moscow Government, and with the participation of the Russian Jewellery Guild and the Creative Artists Union of Decorative and Applied Arts.

During the opening ceremony, the Russia 21st Century jewelry competition awards were presented, and Oleg Dukhovnitsky, the Head of Russia’s Federal Agency of Communications, presented to the participants a series of “canceled” postage stamps, celebrating the 300th anniversary of the Gokhran.

During the opening ceremony, the Russia 21st Century jewelry competition awards were presented, and Oleg Dukhovnitsky, the Head of Russia’s Federal Agency of Communications, presented to the participants a series of “canceled” postage stamps, celebrating the 300th anniversary of the Gokhran.

On October 9 Dr. Cavalieri delivered a lecture about the global diamond industry to an audience of jewelry industry leaders, jewelry designers and manufacturers, and students from various colleges teaching jewelry crafts.

The CIBJO President paid special tribute to the role played by the Gokhran and its head Andrey Yurin, who he credited with forging a way forward for Russia to become a force in the international jewelry marketplace.

The team at Gokhran played a key role in the preparation a Memorandum of Understanding that CIBJO signed last year with the Ministry of Finance of the Russian Federation and the Antwerp World Diamond Centre (AWDC), with the goal of harmonizing the official system used in Russia for the classification of polished diamonds with the standards and nomenclature applied internationally, as it is presented in the CIBJO Diamond Blue Book. “The object of the agreement is to ensure that the system by which polished diamonds are classified and described in the Russian Federation are in accordance with the most widely accepted standards in the international trade,” Dr. Cavalieri said.

Advertisement
Related Topics: CIBJO
click to Comment(Comment)
Up Next

IIJS Premiere 2021 to Be Organised In Physical Form In Bengaluru

Follow This Formula to Calculate Return on Investment (ROI) in Marketing